Into the archives: In 1966, G. Robert Keepin, an ANS member and staff member of Los Alamos Scientific Laboratory, had recently completed a two-year assignment with the headquarters staff at the IAEA as the head of physics activities when he wrote a three-part article for Nuclear News intended to “provide a first-hand scientist’s view of the IAEA today, and a glimpse of its future role in international nuclear affairs.” He described a research agenda very similar to the work the IAEA performs today.

Keepin opened with a provocative question: “Just what does the IAEA actually accomplish, and is it worth the time and money invested? To put the question even less delicately, what do the 650-odd persons at Vienna's old Grand Hotel (IAEA Headquarters) contribute to the world in return for the $10,000,000 they spend each year?

“Granted, ten million dollars seems a comparatively trivial budget for an organization committed to such lofty objectives as peace, health, and prosperity throughout the world. Nevertheless, any taxpayer in the 93 Member States of the IAEA is entitled to question the efficiency and effectiveness of the IAEA in pursuing these objectives, and the present report is intended to provide something more than a superficial answer.” 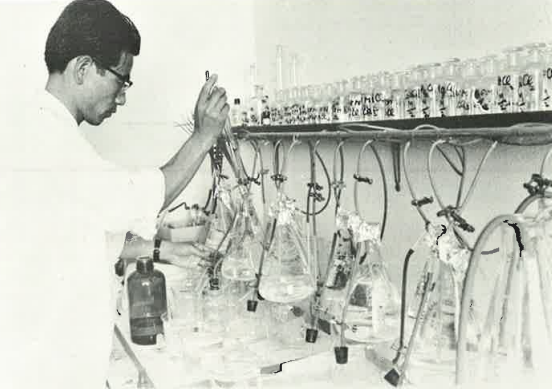 This photo of rice plant research at the IAEA laboratory at Seibersdorf, published in the January 1966 issue of NN, features Dr. Kiyoshi Tensho measuring relative oxygen uptake in rice plants with and without normal leaf shoots. (Photo: IAEA)

First-hand view: In his first dispatch, in the January 1966 issue, Keepin reviewed the origin and structure of the IAEA and its technical program in nuclear power economics, siting, and safety and support for research reactors, noting that “the Agency has made a start on activities relating to the use of nuclear energy for low-cost desalination and is becoming a focal point for international cooperation in the perhaps-overdramatized, but nevertheless promising, field.”

By 1966 the IAEA already had well-established research ties with the Food and Agriculture Organization of the United Nations that continue today, and work was under way to solve problems of soil fertility, plant breeding and genetics, insect eradication using the sterile insect technique, animal health, and food preservation through irradiation. Another focus of research was radiation biology and nuclear medicine, including the use of ionizing radiation to sterilize drugs and medical supplies.

In the February issue, Keepin discussed the physical sciences, including physics, chemistry, and hydrology, with significant discussion of work on nuclear data and nuclear physics. He wrote “the author wishes to point out that the somewhat more extensive coverage of physics activities is largely a reflection of his own particular interests and responsibilities at IAEA Headquarters, and is certainly not meant to imply any judgment as to the relative merits or importance of IAEA work in these fields. It is obvious, for example, that insofar as immediate practical and economic benefit to developing countries is concerned, the IAEA program in hydrology, and industrial uses of radioisotopes are among those of the greatest importance.” A photo published in the February 1966 issue of NN of a hydrological investigation of Lake Chala, Kenya, and surrounding area carried out by members of the Hydrology Section of the IAEA. (Photo: IAEA).

Keepin continued his series in the March issue, describing IAEA regulatory activities in the fields of health, safety, and safeguards, as well as the agency’s technical assistance program. He concluded with personal observations that he prefaced by saying, “It should be manifestly apparent by now that I for one feel the IAEA is indeed making a very worthwhile and necessary contribution—especially in view of its relatively small staff and limited resources.”

Describing a workplace with technical staff from about 45 different nations serving fixed-term appointments, he said, “The IAEA provides a truly unique opportunity for the qualified scientist or engineer to make a direct contribution to world cooperation, including specifically East-West cooperation and understanding. As a specific case in point, I found the unique experience of working closely with Soviet physicists, reactor scientists and engineers in the IAEA both stimulating and enjoyable. Such a day-to-day working relationship with colleagues (of any nationality) in the same field, facing the same problems, inevitably leads to increased mutual respect and understanding—not to mention some lasting friendships! . . .

“It must be freely admitted that there is still much room for improvement in the International Atomic Energy Agency—but certainly this is to be expected in so young, so bold, and so unprecedented an international undertaking. The significant fact is that the IAEA today is resolutely continuing its steady advance to higher standards of service and leadership. The pessimist can think of many reasons why the IAEA could fail, not the least of which is the recent rise of national pride and self-reliance in atomic energy development. Despite all this, after two enlightening years ‘inside IAEA,’ I emerge optimistic and enthusiastic for the future of international cooperation and the expanding responsibilities of the International Atomic Energy Agency in world atomic affairs.”

Keepin’s legacy: After Keepin returned to Los Alamos in 1966, he established the Los Alamos Nuclear Safeguards program and led the development of nondestructive assay technology. Before his retirement in 1990, Keepin returned to the IAEA in 1983–1985 as a special advisor to the deputy general for safeguards. Keepin died in 2007 at the age of 84. His name lives on in the G. Robert Keepin Nonproliferation Science Summer Program research internship hosted annually by the Nuclear Science and Security Consortium and Los Alamos National Laboratory. 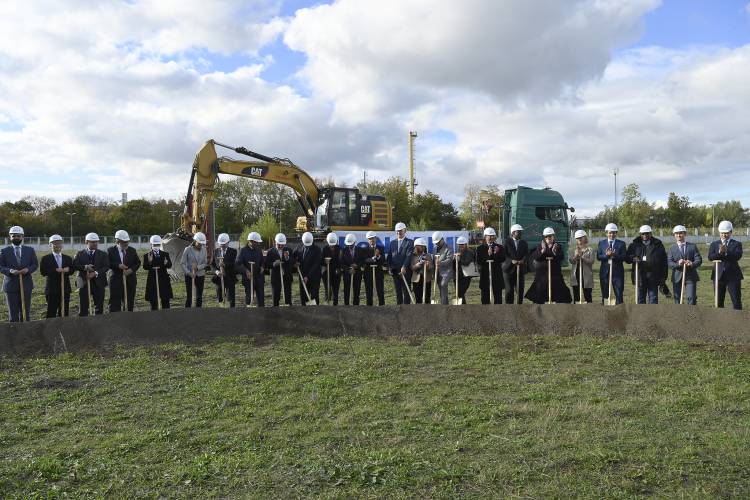 Member state representatives break ground on the construction of a new laboratory building as part of the ReNuAL2 project on October 3, 2022. (Photo: D. Calma/IAEA)

Back to the present: The IAEA’s work is now carried out on a budget considerably larger than the $10 million of 1965. According to the IAEA’s budget update for 2023, the agency anticipates “total resources" for 2023 of €673 million (about $653 million), including both a “regular budget” of nearly €400 million and other funds provided or anticipated for technical cooperation programs and “unfunded” or “extrabudgetary” projects.

Some of those funds go to the operations of the 12 laboratories of the IAEA’s Department of Nuclear Sciences and Applications that conduct applied research and development, deliver training and capacity building, and provide technical and analytical services at the request of member states; eight of those laboratories are located at the Seibersdorf site outside of Vienna.

The initial ReNuAL program was launched in 2014, and the last of three new buildings built under that program—the Yukiya Amano Laboratories building—was opened for operations in 2020. Extrabudgetary funding for ReNuAL2 made it possible to break ground this month on a new laboratory building that will help member states address challenges related to climate change, food security, and environmental management. Major construction is expected to be complete by the end of 2024.