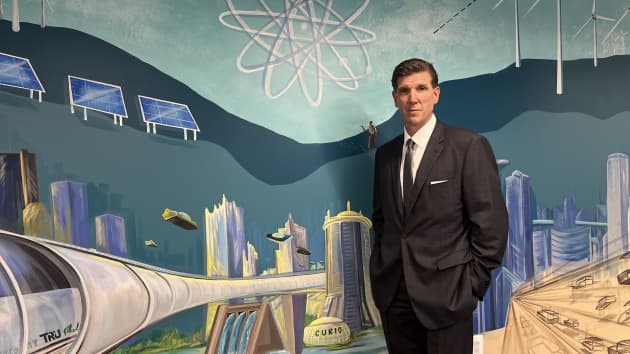 Tire tracks: McGinnis worked in the Department of Energy for 30 years and was very involved with the efforts to develop a long-term plan for nuclear waste disposal, including the unsuccessful work with the Yucca Mountain nuclear waste depository. He says that this experience left “tire tracks on my back,” as politics got in the way of a solution for this “unworkable” issue.

Trash into treasure: After leaving the DOE in 2021, McGinnis accepted the CEO position with Curio, which hopes to have a pilot nuclear waste reprocessing facility operating within six years and a large operating commercial facility by 2035. The commercial facility, described as being the size of a football stadium, will have a capacity of 4,000 metric tons. McGinnis says that Curio will eventually be able to reprocess “all 86,000 metric tons [of U.S.-generated nuclear waste] and the federal government and the public would never see that high level radioactive material on their books again.” He added that through this nuclear waste reprocessing, Curio “would take trash and turn it into products and treasures.”

How it works: The article briefly describes Curio’s NuCycle chemical process for converting nuclear waste into such products as new fuel for advanced reactors and isotopes for making battery ingredients. Curio’s technology is contrasted with the existing plutonium uranium reduction extraction (PUREX) reprocessing technology, which can pose a problem regarding nuclear nonproliferation treaties. Because the Curio process does not separate out pure plutonium, it has “self-protection built in,” according to McGinnis.

Negotiations between McGinnis and officials in several states are ongoing about a potential location for Curio’s reprocessing facility. McGinnis believes that the facility will be a boon to local communities because it “would [provide] well over 3,000 full-time, well-paid jobs.” He adds that negotiations to site a nuclear waste recycling facility are easier than those to site a nuclear waste repository, considering that communities don’t have to worry that the radioactive waste is “going to be there for 10,000 years.”

Nesbit’s view: The article ends by sharing the opinions of others in the nuclear industry about Curio’s NuCycle reprocessing plans. ANS past president Steve Nesbit is quoted as saying, “When advanced reactors get going, it makes more sense (to me) to develop and deploy recycling for those materials.” Nesbit points out that recycled nuclear waste could be brought back into existing nuclear reactors, but “it is better suited for some advanced reactor designs.”

Ben Cipiti, a nuclear engineer at Sandia National Laboratories, also shared his take: “I see Curio as having a good shot at making progress in this area since their approach utilizes lessons learned from the past. They’re partnering with national laboratories to take advantage of the latest research and development and the wide variety of expertise required to be successful in this area.”

Have you ever been punished for something you didn’t do? It happens to most of us on occasion while growing up, especially if we have siblings. It’s not the end of the world, and it...