The demolition work: OREM and UCOR are working to complete major cleanup at ETTP later this year—a goal known as Vision 2020. According to OREM, it will mark the first time in history that a former uranium enrichment complex has been cleaned and removed. OREM added that the cleanup schedule has been accelerated by four years, saving about $500 million in project costs.

“We are in the process of making history as this building starts coming down,” said Jay Mullis, OREM manager. “Getting to this point is the culmination of nearly 15 years of large-scale demolition, with countless more hours preparing, planning, and ensuring each project was conducted safely.” 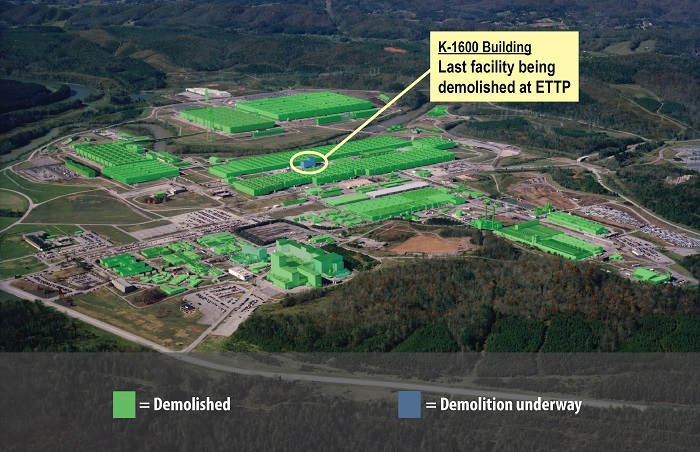 This graphic shows all facilities that have been demolished to date at ETTP in Oak Ridge. Demolition of the only remaining building, K-1600, is advancing.

Some history: The 42,000-square-foot Building K-1600 was used as a test and demonstration facility for uranium enrichment centrifuges. Centrus Energy Corporation leased the government-owned facility from 2002 until 2019, when the company no longer needed the facility after consolidating its centrifuge testing and demonstration activities at a different location in Oak Ridge.

More history: The ETTP, formerly known as the Oak Ridge Gaseous Diffusion Plant, once contained five massive uranium enrichment buildings, including the world’s largest building at the time of its construction—the K-25 building, with a 1.6-million-square-foot footprint and just under one mile from end to end—along with hundreds of support facilities. The site dates back to the Manhattan Project during World War II, and it continued to expand its operations during the Cold War. Those operations ended in 1987, and the site was permanently closed in 1989.

The end goal: ETTP’s demolition and environmental cleanup is part of an effort to transform the former government-owned enrichment complex into a privately owned, multiuse industrial park. OREM has taken down facilities spanning nearly 13 million square feet, transferred more than 1,200 acres of land for economic development, and placed more than 3,000 acres in a conservation easement for community recreational use.

In addition, more than 100 acres will be used for historic preservation efforts at the site. Since the K-25 footprint is part of the Manhattan Project National Historical Park, the demolition of Building K-1600 will increase accessibility and remove risks in the area for future use, according to OREM.