About MARVEL: The DOE initiated the MARVEL project last year to support the development of the microreactor technology, with INL playing a central role. The MARVEL project, according to the article, will provide a robust experimental capability to test microreactor applications, develop regulatory approval processes for designs, evaluate systems for remote monitoring, and develop autonomous control technologies. The prototype, driven by an external source of electricity instead of fission, is a step in the direction of building the demonstration microreactor to be sited at INL’s Transient Reactor Test (TREAT) facility and connected to the world’s first nuclear microgrid.

About microreactors: Unlike their larger counterparts, some of which can yield more than a gigawatt of electrical output, microreactors will operate on a much smaller scale, usually producing no more than 20 megawatts of electricity or comparable thermal output.

The work: Before the 100-kWt demonstration reactor is built and installed at TREAT, the MARVEL team must verify that it will work as designed, the article notes. Simulation software is a key component for predicting reactor performance, but to confirm that the reactor will perform as expected, another verification, known as the primary-coolant apparatus test, is needed. 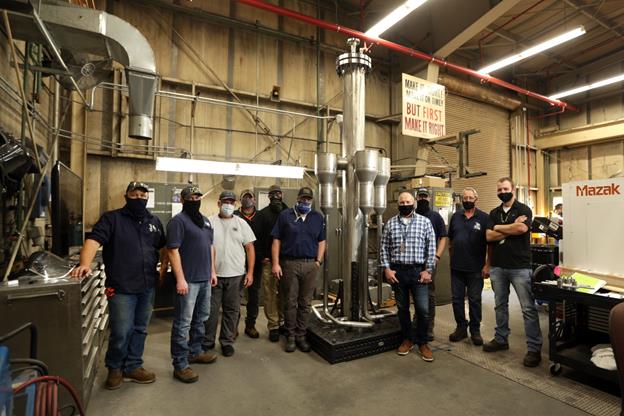 The machine shop team with the completed prototype. (Photo: DOE

If the hardware tests and simulation results are similar, the team can verify the modeling and simulation tool for use in developing the reactor’s safety case, according to the article.

The prototype: The prototype was built in an INL machine shop that produces tools and equipment for facilities, performs maintenance activities for hot cells, and assembles components for radioisotope thermoelectric generators like the one powering the Perseverance rover on Mars.

Fabricated from sturdy type 316 stainless steel, the prototype is one of the largest components the machine shop has ever built.

The Electric Power Research Institute (EPRI) has launched the Nuclear in District Energy Applications (NuIdea) Initiative to support the use of nuclear power in district energy systems. The...