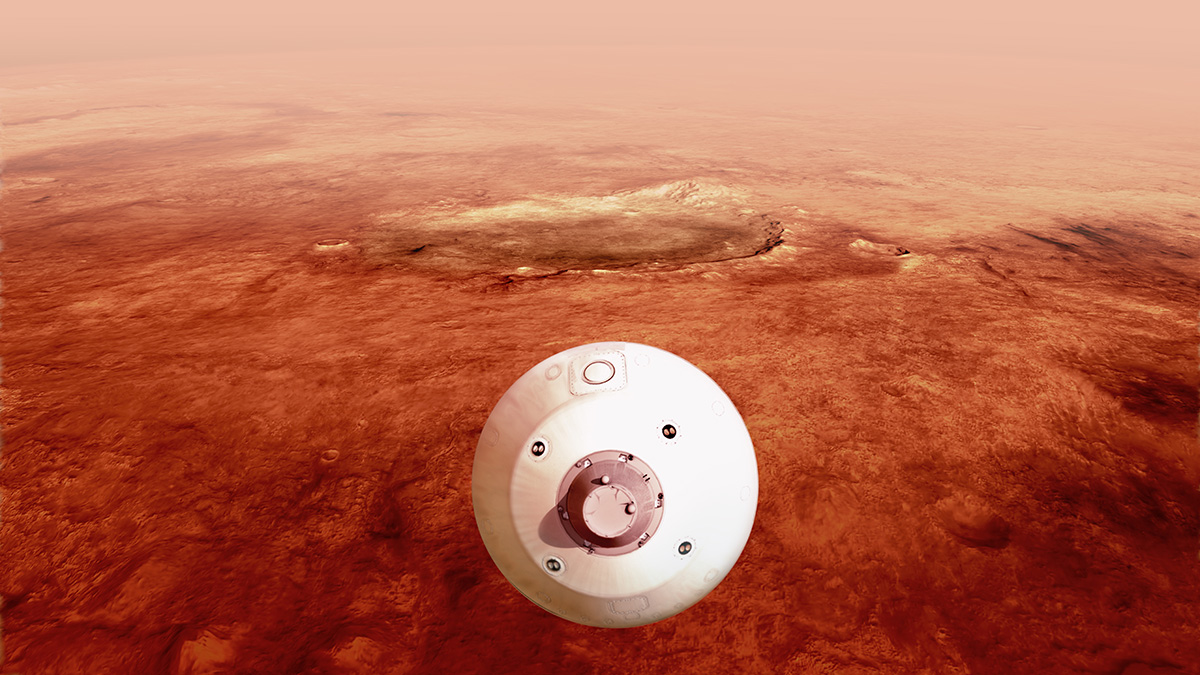 In this illustration, Perseverance guides itself toward the target landing site in the Jezero Crater. Credits: NASA/JPL-Caltech. NASA’s Perseverance rover sent this image to Earth after touching down on Mars. Credit: NASA/JPL-Caltech

A long, strange trip: Perseverance’s journey to Mars began on July 30. Before the "EDL" (entry, descent, and landing) began less than seven months later, on February 18, the aeroshell containing the rover was traveling at nearly 12,500 miles per hour. Rapid deceleration as the rover descended through the relatively thin atmosphere of Mars was aided by supersonic parachute and by thrusters to bring the rover to a walking speed of about 1.7 miles per hour just before touchdown. The dramatic series of critical EDL maneuvers is captured in a NASA video released prior to the successful landing.

Perseverance landed within its target, the 28-mile-wide Jezero Crater. Scientists had determined that Jezero once had its own river delta and was filled with water, and that the environment was likely to have preserved signs of any life from billions of years ago. The steep cliffs, sand dunes, and boulder fields of Jezero made the landing the most challenging ever attempted.

The mission: The 2,263-pound Perseverance, which is about the size of a car, will undergo several weeks of testing and receive new software before it begins a two-year science investigation within Jezero. During the same period, the Ingenuity Mars Helicopter team will prepare the small drone, which is currently attached to the rover’s undercarriage, for the first attempt at a controlled, powered aerodynamic flight on another planet.

A key objective for Perseverance’s mission on Mars is astrobiology, including the search for signs of ancient microbial life. The rover will characterize the planet’s geology and past climate, pave the way for human exploration of the Red Planet, and be the first mission to collect and cache Martian rock and regolith, according to NASA. Subsequent NASA missions, in cooperation with the European Space Agency, will send spacecraft to Mars to collect sealed samples from the surface and return them to Earth for in-depth analysis.

Two other scientific missions successfully entered Mars orbit earlier this month. China expects to land its Tianwen-1 rover within months to look for signs of life in a different part of the planet. The United Arab Emirates has sent a probe it calls Hope to study the weather and atmosphere on Mars and to possibly provide clues to changes that made the planet inhospitable to life.

Power specs: According to NASA, Perseverance’s power system is identical to the one used on the Mars Science Laboratory's Curiosity rover, which has been used successfully since its launch in 2011. The RTG uses the heat from the radioactive decay of plutonium-238 to generate a steady flow of about 110 watts of electricity at the start of the mission, which will decline by a few percent each year.

The RTG weighs about 99 pounds and contains 10.6 pounds of plutonium dioxide. While the system has a design life of 17 years, it can be expected to produce power for much longer.

The RTG does not just power the rover; heat transported through a fluid loop will keep the rover’s electronics warm on a planet that has an average temperature of -64 °F.

Two lithium-ion batteries, charged by the RTG, are available to meet peak demands of rover activities when the demand temporarily exceeds the RTG’s electrical output levels.