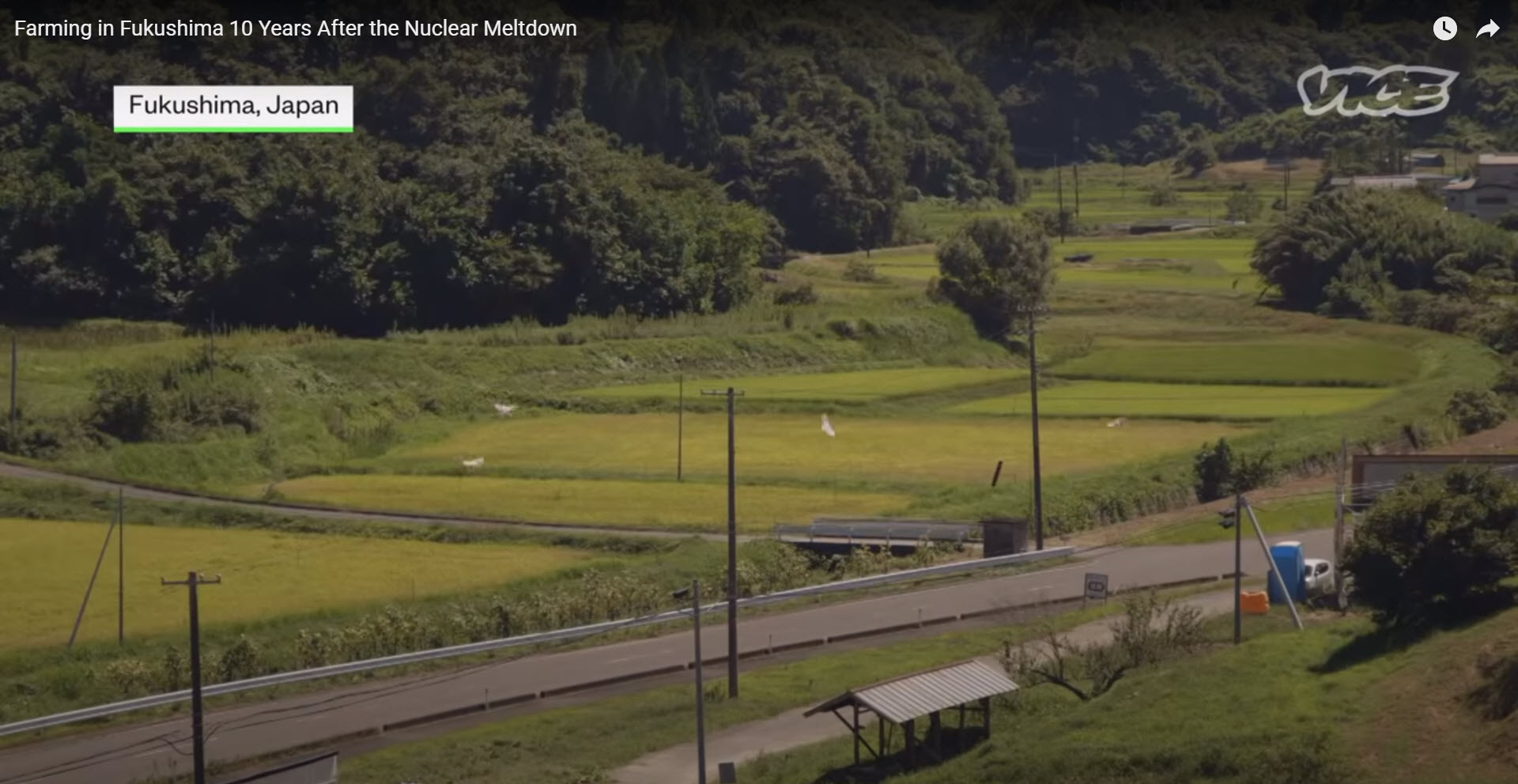 The video opens with views of the bucolic rice fields of Saito’s farm, about 50 km (about 30 miles) from the Fukushima Daiichi nuclear site. The narrator of the video informs us that the farm has been in the family for eight generations and is run by Saito and his 82-year-old mother.

The good: Fifteen percent of Fukushima’s 96,000 farmers evacuated after the tsunami, and some never returned. Saito says that some people stopped farming following the nuclear accident, but he “stayed to fight” and is shown monitoring the farm with a Geiger counter. It is difficult to see the full reading, but after Saito places the detector on the ground, it appears to show 0.263 µSv/hr. That is basically just background levels of radiation: For reference, eating a banana would expose one to 0.1 µSv.

Saito then discusses some of the precautions he takes in order to make sure his produce is completely safe to consume. He monitors the radiation on a regular basis and tests all of his produce using a radiation tester. All of his produce tests lower than the government regulations, and we learn from the narrator that two years after the accident, only 1.5 percent of food products were over the radiation limits set by the Japanese government, and that by 2017, that number dropped to 0.05 percent of food from Fukushima Prefecture.

The video then follows Furuyama at his peach orchard. The narrator says that Furuyama’s luxury peaches have a much higher sugar content than regular peaches. The average supermarket peach has a sugar content of 13 brix (the unit of measurement for sugar content), but Furuyama’s peaches measure at over 30 brix, and even his “more affordable peaches” sell for more than $100 each.

The Tokyo Olympic Games are scheduled to be held this summer, a year late due to the COVID-19 pandemic, and the baseball and softball events will be hosted in Fukushima. The farmers are excited to reintroduce the world to their community and commodities. Furuyama says that the world is stuck with the image of danger when thinking of Fukushima. He hopes, however, that people will come to watch the Olympic Games and see for themselves that Fukushima is safe.

The bad: There are some points in the video where the narrator incorrectly characterizes the radiation risk from the continued cleanup of the nuclear site. The narrator states that the earthquake and the deadly tsunami that followed damaged more than a million buildings, including the Fukushima Daiichi nuclear power plant, “which is still leaking radiation today.” The first part of the statement is correct, but to say that the nuclear site is still leaking radiation, while true, does not characterize the radiation exposure at the site.

Lake Barrett, an ANS member and consultant to Tokyo Electric Power Company regarding its cleanup efforts, said, “No water is leaking from the basements [at the damaged nuclear site], but when it rains hard, there are storm drains that do have some very low levels of cesium. [It’s] very very small, but not zero.” Barrett continues, “[The levels of radiation] are all thousands of times below regulatory standards and not a real health risk at all. Being on an airplane for a few minutes gives more radiation exposure [than being at the Fukushima site].”

The ugly: Then the video mentions the very important issue of wastewater currently being stored in hundreds of tanks on-site. This issue has been talked about since 2013 and has been met with fierce opposition from the fishing industry lobby in Japan—an important part of the Japanese economy. The video states, “By 2022, the nuclear plant will run out of storage facilities for radioactive wastewater. Experts have advised the government to release the water into the ocean, which could impact fishing and raise concerns for local produce.” Again, this statement is partly true, but it does not provide the whole picture.

TEPCO uses several water treatment systems: initial cesium removal systems named Kurion and SARRY, which remove 99.99 percent of cesium, followed by a desalination system that purifies the water to be reused as coolant. The waste from the desalination process is then moved to storage tanks to be processed by the advanced liquid waste processing system (ALPS). These advanced systems remove 62 radionuclides, such as cesium-134, cesium-137, strontium-90, and iodine-129, from the highly radioactive water. The process is so effective that the levels of these radionuclides in the water are well below the current international regulatory standards.

The problem that officials have to deal with is tritium levels in the water. According to TEPCO, tritium levels in the treated storage tank water are at levels higher than reg­ulatory limits allow. However, it is common prac­tice by nuclear power plants all over the world to sufficiently dilute and discharge tritiated water into the environment over a period of time under the strict supervi­sion of regulatory bodies.

Paul Dickman, ANS member and study director for the ANS Special Committee on the Fukushima Diaiichi accident, said that while the level of radio­activity is high, “The United States discharges almost double that amount from our nuclear reactor fleet every year, and South Korea annually discharges an amount equal to about 40 percent of the stored tritium at Fukushima.”

Natrium, a 345-MWe sodium fast reactor with a molten salt energy storage system, was developed by TerraPower and GE Hitachi Nuclear Energy. TerraPower is planning to build the first Natrium...