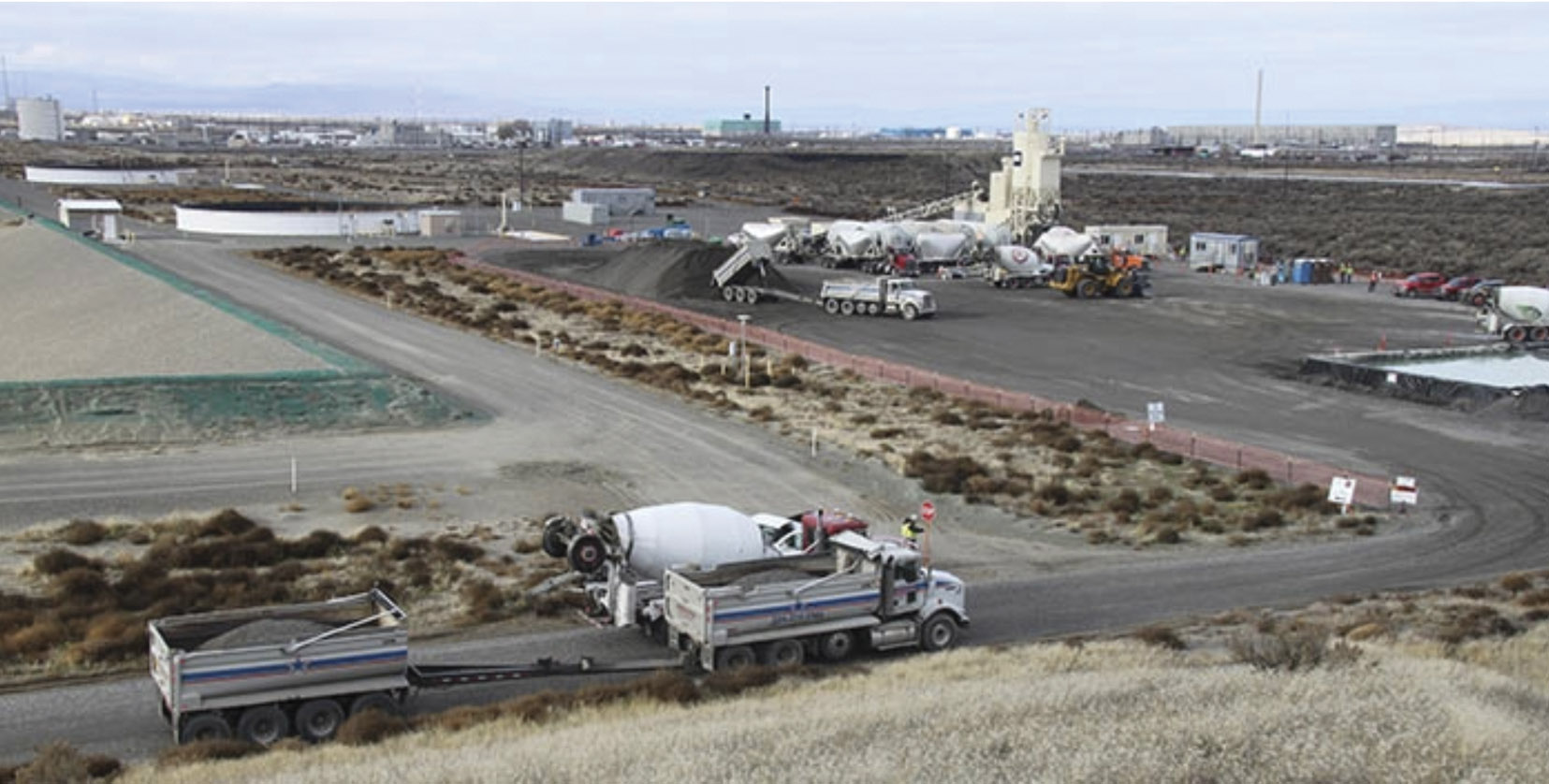 Truckloads of grout are placed in PUREX Tunnel 2 to stabilize it. PUREX Tunnel 1 partially collapsed in 2017. Photo: DOE

“Despite efforts to mitigate risks and clean up excess facilities, significant vulnerabilities remain at Hanford due to, among other things, the degrading state of hundreds of contaminated excess facilities still requiring cleanup,” the GAO said in the report. “Given the pivotal role of the S&M program in ensuring that aging and degrading contaminated excess facilities do not collapse or fail to contain radioactive or hazardous material, it is important that this program is functioning effectively and that any weaknesses are addressed in a timely manner.”

According to the GAO, the partial collapse of the Plutonium Uranium Extraction (PUREX) Tunnel 1 in May 2017 (NN, June 2017, p. 63) was “a clear signal that there are flaws in the S&M program at Hanford.” While the DOE took some actions to evaluate the physical causes that contributed to the tunnel collapse, the department has not investigated the programmatic causes by conducting an accident investigation or root cause analysis, the GAO said.

While an engineering evaluation of the PUREX tunnels was completed at the request of Washington State, officials with the DOE’s Richland Operations Office (RL) told the GAO that an accident investigation was not conducted because the collapse did not meet threshold requirements in a DOE order that includes, among other things, damages or costs exceeding $2.5 million. The GAO, however, found that the costs of responding to the event and stabilizing the tunnel were about $10 million. RL also waived a root cause analysis at the request of its cleanup contractor, according to the GAO. CH2M HILL Plateau Remediation Company is RL’s prime cleanup contractor at Hanford.

The GAO also found that parts of Hanford’s Reduction-Oxidation Plant, which operated from 1952 through 1967, have not been entered in more than 50 years, and its structural conditions are unknown. “Without conducting comprehensive inspections, RL cannot ensure that it is meeting all of DOE’s S&M requirements, such as addressing aging degradation and obsolescence of some facilities and preventing other potential events similar to the PUREX tunnel collapse,” the GAO said.

The GAO is recommending that the DOE (1) analyze the programmatic root causes of the PUREX tunnel collapse, (2) routinely conduct comprehensive inspections of contaminated excess facilities and take tvimely action as warranted, and (3) assess RL oversight of S&M of Hanford excess facilities. In response to the report, the DOE agreed with the GAO’s recommendations and stated that it is taking steps to implement all of them by the end of the year.

The full 60-page report, DOE Should Take Actions to Improve Inspections and Oversight of Contaminated Excess Facilities (GAO-20-161), can be found on the GAO website at <www.gao.gov>. The DOE's OEM and contractor CHPRC are testing a conveyance system that will pump engineered grout through more than 1,500 feet of pipe to three underground at-risk structures at the Hanford Site. (Credit: OEM)

As the Hanford Site continues a phased remobilization of site operations, the Department of Energy’s Office of Environmental Management and its contractor CH2M HILL Plateau Remediation Company (CHPRC) recently began designing and constructing a full-scale, off-site mock-up to support the stabilization of three underground structures with engineered grout, the DOE announced on July 7.

Located near the former Plutonium Finishing Plant, the structures—the 216-Z-2 Crib, 216-Z-9 Crib, and 241-Z-361 Settling Tank—received liquid waste during Hanford’s plutonium production operations and contain residual radioactive and chemical contamination. A 2019 report indicates that the structures are at risk of age-related failure. The National Academies of Sciences, Engineering, and Medicine on February 21 released its fourth and final report on its review of possible approaches to treating low-­activity waste at the Hanford Site. The Department of Energy plans to vitrify approximately 56 million gallons of radioactive and chemical waste at the Waste Treatment and Immobilization Plant, which is currently under construction at Hanford. The waste will be separated into high-­level waste and low-­activity waste (LAW) streams before being turned into a solid glass form through vitrification. Not all of the LAW, however, will be vitrified, and the DOE has not determined a treatment method for the excess waste, called supplemental LAW (SLAW).