Understanding the legacy of the “Atom for Peace” speech

What to expect from this article: (4 minutes read)

An unprecedented and threatening context: 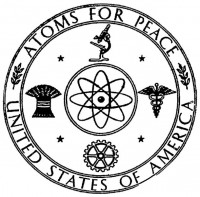 The Atom for Peace symbol [1]

On December 8, 1953, President Dwight D. Eisenhower gave a speech to the UN General Assembly in New York entitled "Atom for Peace". [2,3] This speech was a tipping point for the peaceful use of atomic power. Today, 66 years later, we will attempt to summarize its contested legacy.

"I feel impelled to speak today in a language that in a sense is new, one which I, [...] would have preferred never to use.That new language is the language of atomic warfare."-President Dwight D. Eisenhower

In 1953, atomic power is not exclusive to the United States anymore. The Soviet Union already tested several nuclear bombs. Among them, at least one thermo-nuclear bomb [2].

President Dwight D. Eisenhower is conscious of both the dangers and promises of atomic power. On one hand, he acknowledges the increasing risk of nuclear proliferation and the threat of mutual destruction from atomic warfare. On the other hand, he recognizes the immense potential of peaceful use of nuclear energy.

As such, in his speech, the president declares: "...the United States pledges before you, and therefore before the world, its determination to help solve the fearful atomic dilemma - to devote its entire heart and mind to finding the way by which the miraculous inventiveness of man shall not be dedicated to his death, but consecrated to his life."-President Dwight D. Eisenhower

Positive consequences of the speech:

"The governments principally involved [...], should begin now and continue to make joint contributions from their stockpiles of normal uranium and fissionable materials to an international atomic energy agency [...].

The more important responsibility of this atomic energy agency would be to devise methods whereby this fissionable material would be allocated to serve the peaceful pursuits of mankind." -President Dwight D. Eisenhower

The "Atom for Peace" speech described the framework for the creation of several international treaties and agencies. Among them, the International Atomic Energy Agency and the treaty on the Non-Proliferation of Nuclear weapons. The IAEA never became a weapon-grade materials bank, but still had a tremendous effect on non-proliferation and the development of peaceful nuclear energy (learn more in [4]).

"The United States knows that if the fearful trend of atomic military build-up can be reversed, this greatest of destructive forces can be developed into a great boon, for the benefit of all mankind."- President Dwight D. Eisenhower

This speech led to the creation of a multitude of peaceful nuclear programs across the world, benefiting mankind in energy production, medicine, and many other fields [5].

3) Democratization of the discussion around nuclear power

"If the peoples of the world are to conduct an intelligent search for peace, they must be armed with the significant facts of today's existence." -President Dwight D. Eisenhower

After this speech, atomic power ceased to be exclusively a secret matter of the state to become a global challenge for every citizen of the world. The Atom for Peace program launched soon after supported the development of nuclear research to civilians and countries that did not have previous access to nuclear power.

Shortcomings of the speech

1) This speech did not prevent the nuclear arm-race that followed.

"...two atomic Colossi are doomed malevolently to eye each other indefinitely across a trembling world" -President Dwight D. Eisenhower

Unfortunately, the President predicted the fear the world would live under during the rest of the cold war between the United States and the Soviet Union.

2) Some programs that were launched after the speech might have contributed to proliferation.

"First, the knowledge now possessed by several nations will eventually be shared by others, possibly all others." -President Dwight D. Eisenhower

Despite the president's desire and efforts to limit the proliferation of military nuclear power, some argue that programs put in place after the "Atom for Peace" speech initiated the development of nuclear military programs in some countries. Ariana Rowberry, for example, described how the well-intended Atom for Peace program might have contributed to the subsequent development of Iran's nuclear weapons program (learn more in [6])

The" Atom for Peace" speech was a turning point in the international discussion around atomic power.

In this short story, we discussed the positive consequences of the "Atom for Peace" speech, as well as some of its shortcomings. It democratized nuclear power and laid the ideological foundations for international agencies and bodies for the development of peaceful use of nuclear energy. This development improved the condition of mankind thanks to the production of clean and plentiful electricity, as well as improvements in medicine, space propulsion, and plenty of other technological advancements.

In essence, the "Atom for Peace" speech was a call for international unity in an ambiguous time of unprecedented danger and immense opportunities. Today, as the world faces the reality of climate change, it is important we remember these words of President Eisenhower:

[3] Draft of presidential speech before the general assembly of the United Nations. https://www.dwightdeisenhower.com/DocumentCenter/View/2278/Atoms-for-Peace-Draft-PDF?bidId=

Pierre-Clément Simon is a Ph.D. candidate in nuclear engineering at Pennsylvania State University where he works with Prof. Arthur Motta (ANS Fellow). He is the vice-president of the local Alpha Nu Sigma chapter. He is also an ANS member and part of the ANS Social Media Team. He invites you to connect with him on LinkedIn.