Underway On Nuclear Power: A Retrospective 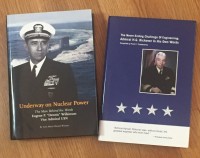 I was honored to participate in a panel session on November 14, 2018, at the American Nuclear Society's Winter Meeting in Orlando, Florida. The title of the session was "Underway on Nuclear Power: A Retrospective," focusing on the importance to nuclear power of Admiral Hyman G. Rickover and Vice Admiral Eugene P. "Dennis" Wilkinson.

The now well-known phrase Underway on Nuclear Power was first transmitted by flashing light at 11:00 a.m. on January 17, 1955, as the submarine USS Nautilus (SSN-571) made history as the first sea-going vessel of any kind to be successfully powered by a nuclear reactor. Rickover's and Wilkinson's collaborations and commitment to highest standards of operating excellence were key to the development and implementation of the U.S. Navy's use of this new power source. It changed underwater military tactics and the world.

While their first collaborations began 70 years ago, the importance of these two men to the nuclear industry is as vital today as it was back then. Rickover and Wilkinson were remarkable leaders, each in his own way, who made nuclear power a viable propulsion option for the Navy and that later was transferred to the commercial sector as a worldwide energy source. Years later, Wilkinson was the first CEO of the newly established Institute of Nuclear Power Operations (INPO) following the Three Mile Island accident in 1979, and further influenced the commercial nuclear power industry.

Joe Colvin, CEO-emeritus of the Nuclear Energy Institute and past ANS president (2011-2012), served as session chair and panel moderator. Joe added depth to the discussions from having personally interacted with Admiral Rickover during his Navy career and later working with Admiral Wilkinson at INPO and later still in the commercial nuclear power industry.

Captain Richard Claytor USN (Retired) worked with Admiral Rickover at the Navy's Naval Reactors office for a number of years. His personal recollections of their interactions were entertaining and informative, and provided broader perspective of the Admiral.

Paul Cantonwine, manager of Fuel Performance and Design group at Global Nuclear Fuels, compiled a book of Rickover's speeches and writings, The Never-Ending Challenge of Engineering: Admiral H.G. Rickover in His Own Words. Paul talked of how working on Admiral Rickover's speeches and writings greatly influenced his professional development even though he had never met the Admiral.

I participated as author of Vice Admiral Eugene P. "Dennis" Wilkinson's biography, Underway On Nuclear Power: The Man Behind the Words. I was privileged to have worked with Dennis Wilkinson at INPO and called him friend for many years. My comments at the session summarized his career accomplishments and highlighted a number of his guiding principles about leadership.

There was a lot of interest in these two great men. Following the panelists' remarks, we enjoyed lively interactions with the audience during the Q&A session. It was a great day. Many thanks to Ted Quinn, Operations and Power Division and past ANS president (1998-1999), and ANS for hosting this session.