Yesterday, I was reading an old (1970's) brochure published by ASEA-ATOM on district heating reactors.  While looking at that material I remembered that now, today, there is at least one effort afoot today to use a simple pool reactor for district heating - a pretty sharp idea, actually.  However, following that and spurred by a conversation on social media with Jessica Lovering, it occurred to me that the lowly pool type reactor, often the first kind of reactor many students have historically encountered in their trip through the nuclear universe, has not been given its due.  With that in mind, let's take a look at pool reactors through historic photos and materials.

Pool reactors have historically been non-power reactors; that is to say, they've not been used to generate electricity or do useful work related to power production.  Instead, they fall generally into the classifications of training reactors (reactors used in the educational process for giving first-hand experience in operating a reactor) and test and research reactors (reactors used to test materials or fuels, or used to bombard target experimental materials with radiation for the purpose of investigation.) 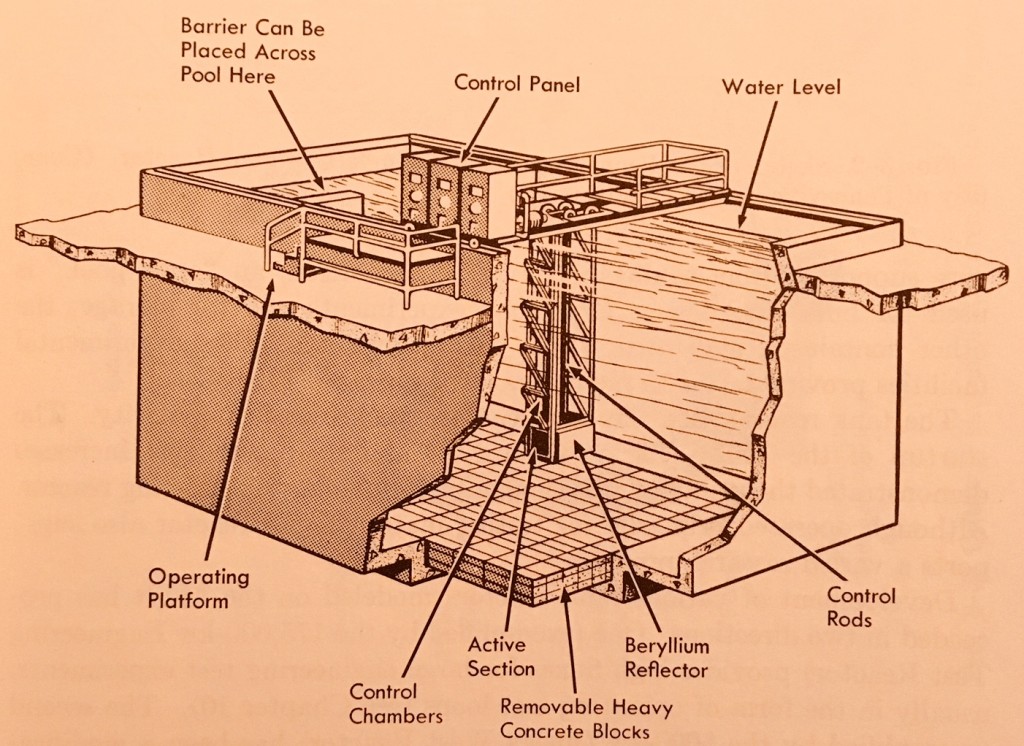 Above, we see the very first reactor that could be classified as a "pool reactor" - the Bulk Shielding Reactor at Oak Ridge, placed in operation in 1950.  The installation was made as simple as possible, with the reactor core itself held at the bottom of an extension from a movable bridge.  "Bulk shielding" was provided by a large pool of water, keeping radiation levels safe for operators on the bridge or near the pool edge while the reactor was operating.  Interestingly, the control equipment for this reactor was initially mounted on the traveling bridge itself as seen in this early illustration.  This reactor operated initially with conventional MTR type plate fuel (BSR-1 core) but also tested dispersion-type high enriched fuel in a steel plate form (BSR-2 core).

This reactor differed from other early test and research reactors like the Materials Test Reactor and the Engineering Test Reactor (both at NRTS) because of its open construction; the other two mentioned were tank type reactors with the core placed in a tank through which cooling water was pumped.  The Bulk Shielding Reactor relied only on the pool water for cooling the core, which was not operated at anything near the power levels used in the larger reactors.  In many cases, pool reactors were referred to as "swimming pool reactors" - a fairly appropriate identification, if not an invitation.  With the completion of this new type reactor in 1950 it became apparent that a solution had been found to allow a wide number of small reactors to be built (once allowed by the changes to the Atomic Energy Act in 1954). 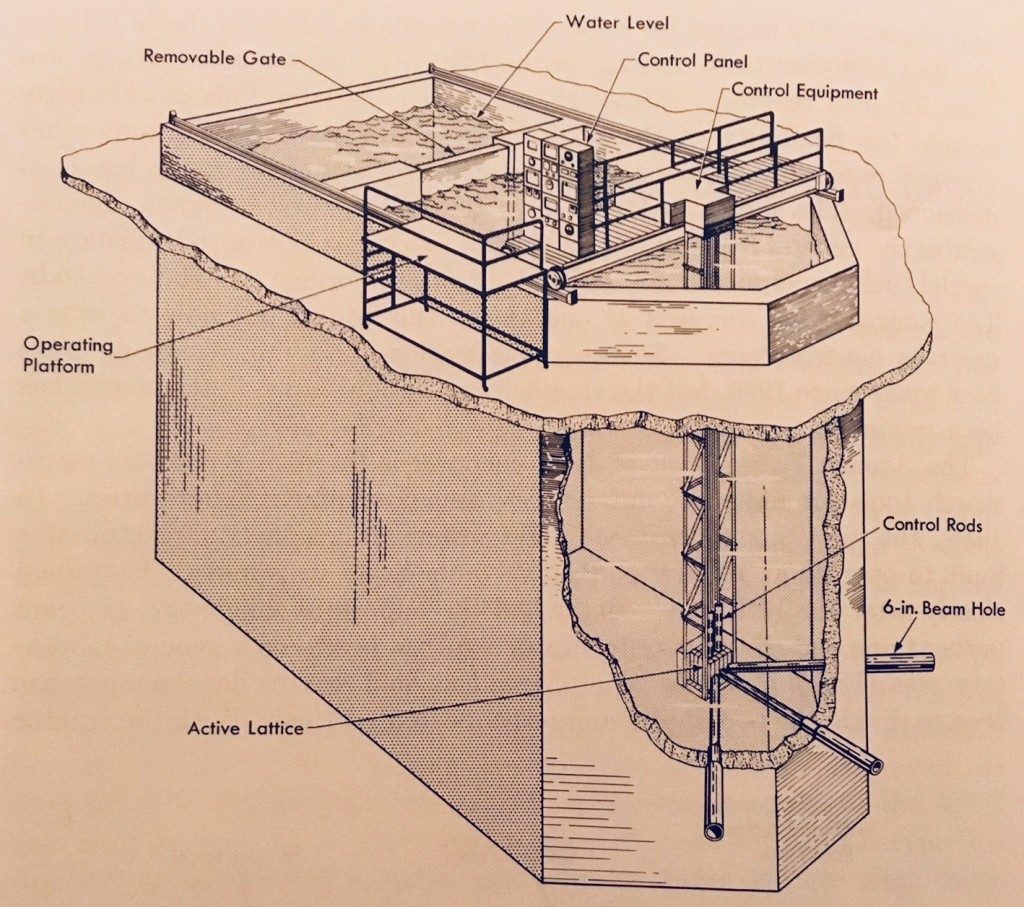 The first non-government-owned pool reactor to be completed was that which Pennsylvania State University designed and built at University Park, Pennsylvania and which is illustrated above.  This reactor first started up in 1955, and as can be seen followed a number of features of the Bulk Shielding Reactor closely (including having the control panels on the bridge.)  This reactor was originally just a 100 watt reactor, using MTR type fuel; later it was upgraded to 200 watts.  This installation also pioneered the use of beam holes, used to directly port radiation from the core out to where it could be used to bombard test objects and materials. 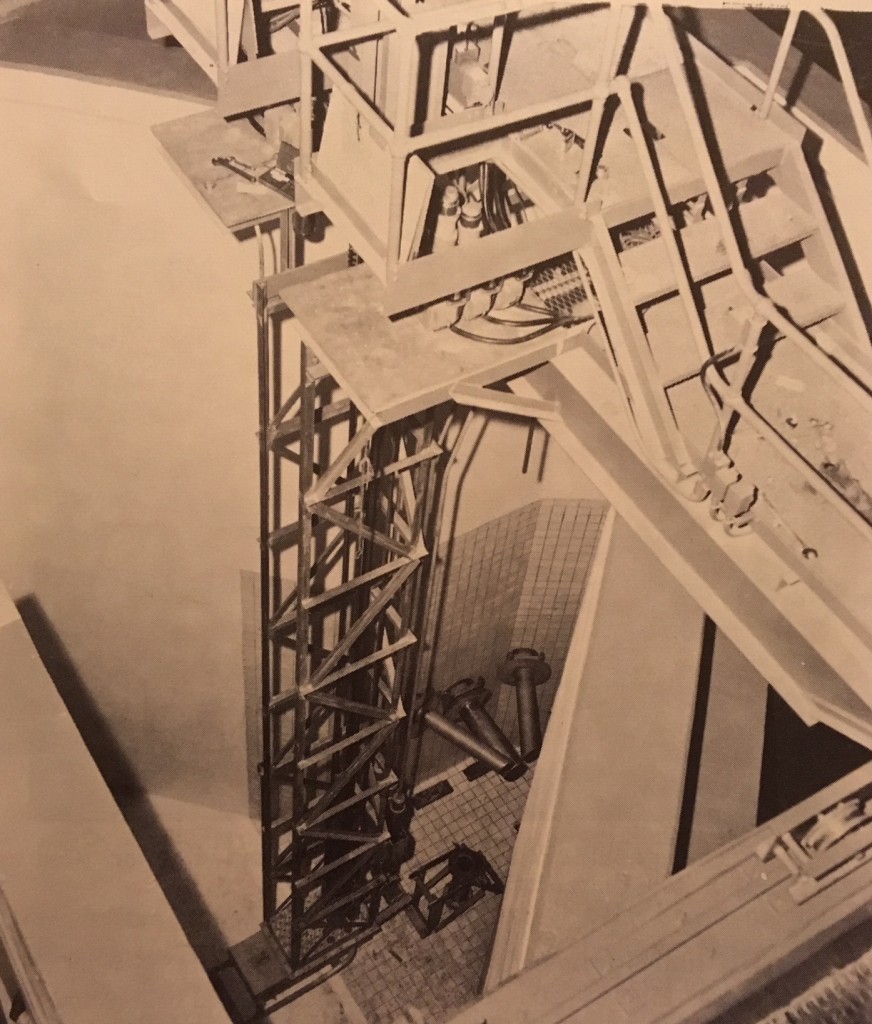 The Pennsylvania State reactor is shown here with the bridge (and thus core) pulled away from the normal operation position, which was right next to the beam tubes visible entering the pool through the structure.  The pool is drained in this photo, likely taken during construction. 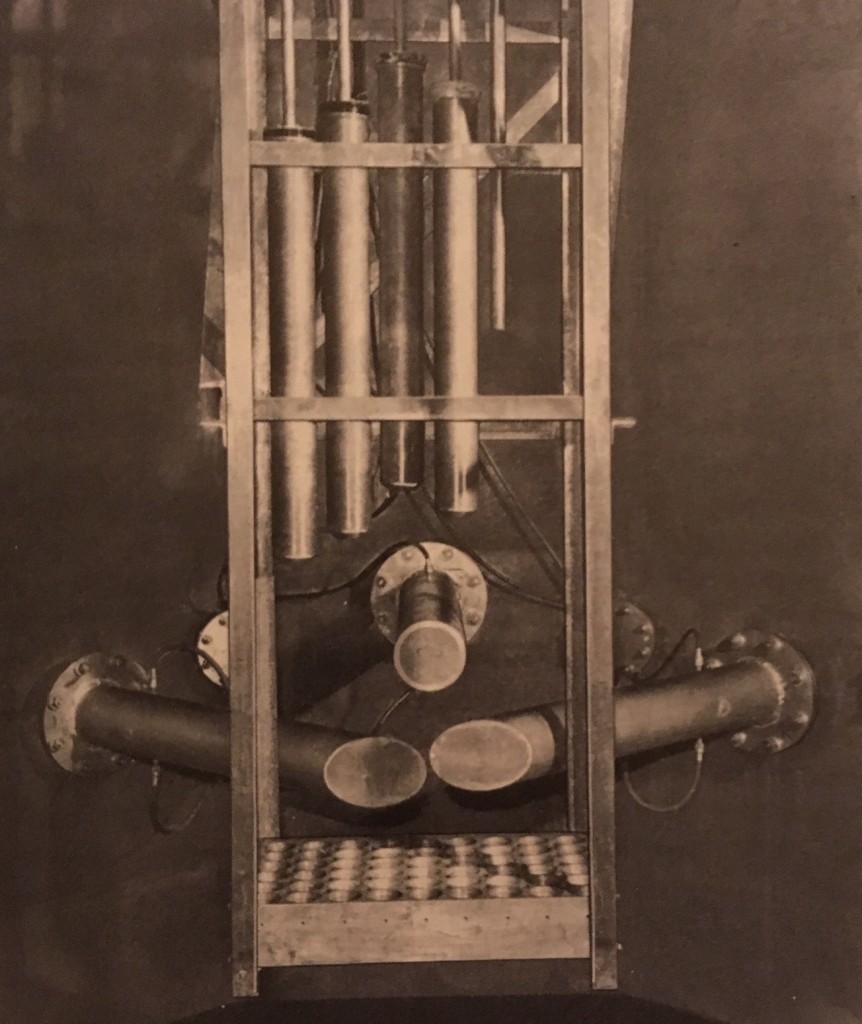 This view inside the pool of the Pennsylvania State reactor shows the core support plate, without any fuel, in its normal operating location by the beam tubes. Neutron detectors are hanging down inside the support bridge structure in this view; these are used to detect power and operate safety systems, just like in a power reactor. However on small early reactors typically the counter channel (source range) detector was pulled away from the core while at power to lengthen its service life. This view of the Chalk River Reactor (Canada) shows SYL-COR fuel elements installed at the center of the core support plate, surrounded by cylindrical detectors and/or samples. While many pool reactors followed the general size and layout of those we see above in photos, there were also efforts made to shrink the pool reactor down to the smallest conceivable useful size - spreading the availability of an actual reactor even more widely. Above, the diminutive ACF Nuclear Products "Pool Training Reactor." This was described by ACF as follows: "The ACF Pool Training Reactor is a portable, low powered, pool type reactor designed for educational and industrial applications. It is inherently safe and simple in both construction and operation and it includes the basic reactor operating principles and can be used either to train students or operators in the uses of a reactor and its technology. It requires only standard laboratory utilities and can be installed in existing buildings without excavation. A 40 ft. by 40 ft. floor area will provide ample space for its operation."  Note the operator using a "Cutie Pie" radiac near the control rod drives. 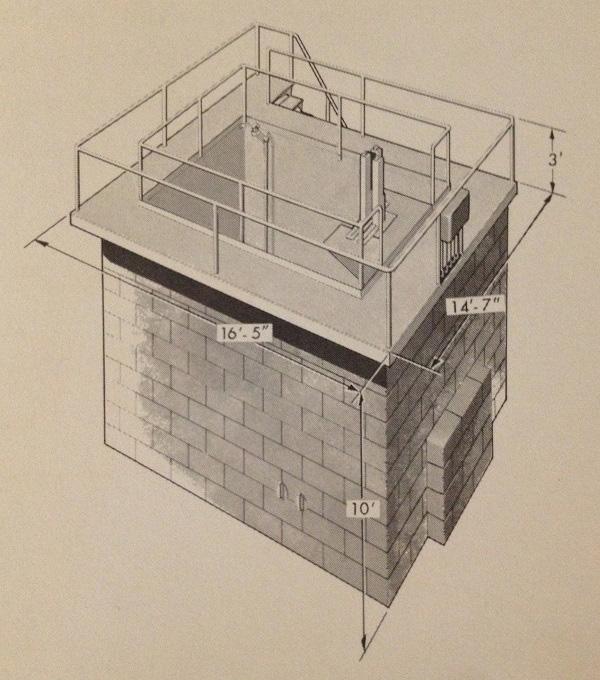 Here we see the dimensions of the ACF Pool Training Reactor structure. This reactor was offered at a 1 watt power rating. ACF offered supervision of the installation, training of operators, a service guarantee, a lab manual and assistance to the owner in preparation of a hazard report.  The author can find no evidence of any of these having been sold.

The pool type training and research reactor spread fairly widely.  By the time of the Geneva Atoms for Peace conference in 1958, nine were operating in the United States and seven more were under construction.  By 1963, 24 were operating, under construction or planned in the United States and another 20 had been built by US firms abroad or were planned.  (For comparison, in 1963 there were 26 of the solid homogeneous type training and research reactors, which are the familiar AGN and Triga reactors, built or planned in the United States - a virtual parity.)

•Illustrations in this article come from sales brochures in Will Davis' collection and the following books: