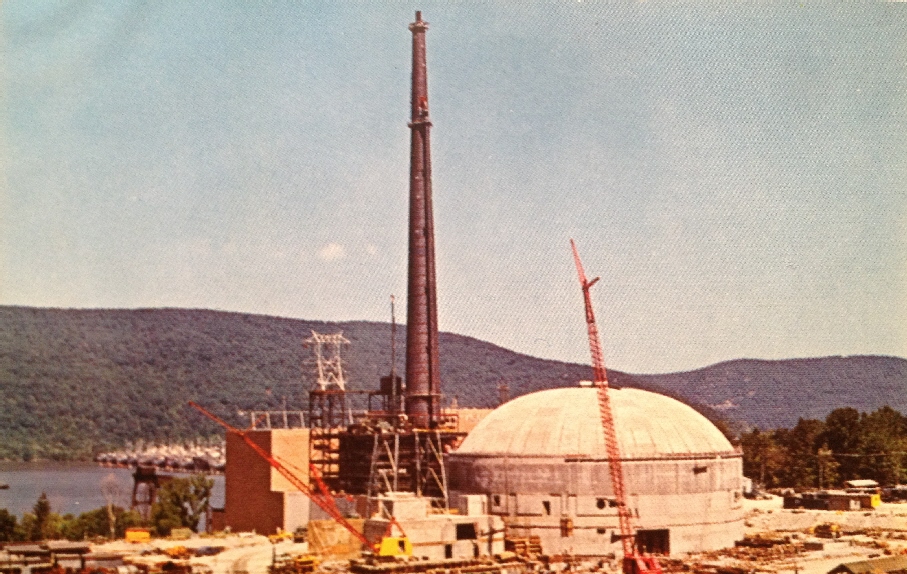 Indian Point Unit 1 under construction. Photo in Will Davis library.

A new article published by the Korea Times, entitled "Korea is second-fastest nuclear plant building country: IAEA" points up the fact that South Korea has historically built its nuclear plants on the average of 56 months (from construction start to commercial operation.)   The article points up the fact that two nations normally thought of as nuclear power leaders and pioneers, France and the United States, have historically seen this average way up at 126 months and 272 months, respectively.  I'd like to offer some comments -- not a defense, but just some comments -- on those numbers to provide perspective, since they're pretty long and, in the case of the U.S., extremely long.

The French nuclear program began, as did so many others, with some questions about which type of reactor would be best suited to the varied needs of that nation.  It was a short time before the Pressurized Water Reactor (PWR) was settled upon as a national standard and built in increasing numbers to ensure the energy independence of the country.  Orders for the first standardized type, known as the CP1, began in 1974.  Even as these were under construction and planned, a design revision was made that rearranged a significant portion of the power plant without changing intrinsically the important systems contained therein. This was the CP2 series ordered starting in 1976.  The CP2 series showed a wider variance in construction times, unit for unit, than did the CP1 series.

All of these were not yet complete -- and in fact the last of the CP1 units not even yet ordered -- when a newer, much larger and different design, known as the P4, was ordered in 1977.  It's important to note that the French had at this point begun to transition from a solid national standard to having three designs of nuclear plant under construction simultaneously. Unfortunately, the P4 did not fare well in its cost to construct and no economy of scale savings were experienced.  A revised P'4 design was launched in 1978 to simplify plant arrangement and construction with the aim of reducing costs. The design was ready for order by EDF, the nationalized utility, in 1980.  Still after this, several more P'4 units were ordered.

I could go on through the N4 design in France, and the fact that by 1988 there was a very deliberate slowdown in nuclear construction as the nation reconsidered its needs and faced actual oversupply, potentially, for several years.  However, one point in comparison with the Korean standard plants now being built is clear -- in Korea, which also is building nationwide standard plants, when a design revision is made, it immediately and totally replaces other plants in the pipeline.  In France, a very considerable overlap occurred, which in itself may have led to overstretching of design talent and the unpredicted economic problems (in terms of cost to construct) of the P4 series.

In the end, France was victorious in its effort to achieve a very high degree of nuclear power on its grid with about 75% of its total electricity being generated by nuclear energy.  Even with delays introduced later in the program, the program's intent was carried out completely successfully, to the well justified pride of the industry and entities involved in France. Conditions of course in the United States, with many different private and public electric utilities, architect-engineers (to design the plants), construction managers (to build the plants), and vendors (to supply equipment to the plants), were exceedingly different from those found today in Korea, and in the days of old in France, so that direct comparison isn't particularly useful.  However, it suffices to point up the fact that a number of factors both inside the nuclear enterprises themselves (owners and all of their contractors) and outside of them served generally to drive construction times out.

Estimates of electric power demand increases for the future, which were made in the 1960's and early 1970's and which led to the ordering or announcement of very many nuclear plants, turned out to be quite optimistic in most cases.  The energy crises of the early 1970's led not to a sense of the need of increased use of nuclear electricity but rather to a national sense that economy and austerity were the watchwords of the future.  As a result of this, and other pressures, the demand flattened.  However, by this point quite a number of utilities which had not cancelled their in-progress nuclear plants elected to slow construction (not wishing to abandon facilities partly built, to write off income already spent and to 'get out of line' for major components that were on long lead times), so that artificially the average construction time dragged out longer.

In the late 60's, when the US Atomic Energy Commission was suggesting that a utility could expect that it could have a nuclear plant in commercial operation about six years after the award of the first contract (normally to an architect-engineer) a flood of orders coming in to the various firms involved in designing and constructing plants here began to result in a paper backlog for equipment.  For example, the large and heavy reactor pressure vessels could not just be turned out like toasters, and the general rule of ordering the vessel five years before the expected commercial operation date for the plant (actually it would be delivered well before this) began to look short.  This and other equipment delays began to push the average construction time out.  The insertion into the competitive field of foreign makes for both pressure vessels and turbine generators, as well as the early cancellation or delay of a number of plants in the pipeline, alleviated this delay somewhat prior to 1970. But then, there was a serious shock to the system. 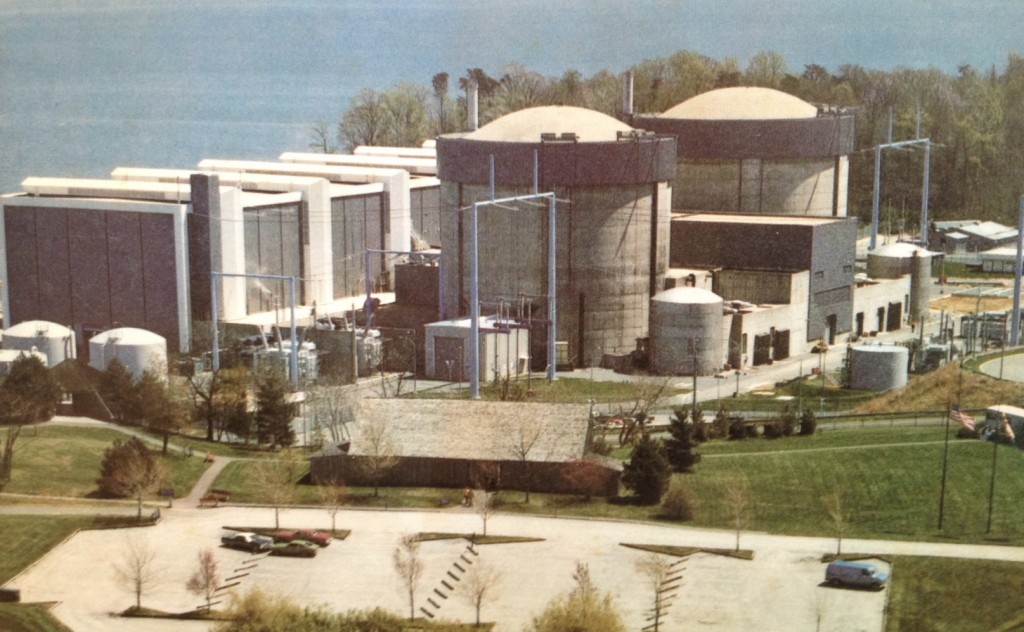 The whole episode known generally in the business as "The Calvert Cliffs Decision" is too lengthy for inclusion here in appropriate detail, but it will suffice to say that the legal decisions over this case which forced the nuclear utilities to develop and file Environmental Impact Statements for all nuclear plants being built, in line with the National Environmental Policy Act, was a very serious blow to the schedule average.  One architect-engineer firm estimated that this process, coupled with more stringent site selection (and the narrowing of available sites on which to build plants) added more than two years to the overall schedule of building a nuclear plant in the United States.  In fact, by this time in the middle 1970's the schedule was more like nine or ten years from first contract award to commercial operation.  Also, a licensing moratorium while the Calvert Cliffs legal decision played out did not help matters.

Much the same effect followed the Three Mile Island (TMI) accident in 1979, after which a tremendous impact was felt throughout the fields of nuclear utilities and every one of their vendors and contractors. In all reality TMI had a deeper effect on the industry than Calvert Cliffs could ever have had.  Plants still under construction after about 1980 experienced very serious delay because of this incident.

Serious complications were experienced more and more as the 1970's wore on, as well, in the area of protest and intervention by outside parties.  Legal wrangling by outside parties, usually allied with environmental groups of the day whose leadership lived nowhere near any given nuclear plant being protested and who "shipped in" opposition, seriously delayed many projects.  Some groups even took full credit for having killed off projects, although they by themselves had no power to do this, per se. TVA's Browns Ferry Nuclear Plant under construction, early 1970's. This is a rare example wherein the owner also acted as engineer-constructor (although GE assisted in design because of the proprietary pressure suppression containment.) Photo from TVA brochure in Will Davis library.

This isn't to say that internal factors weren't discovered.  In some cases, less than optimal design made plants or portions of plants difficult to construct. New construction methods, such as over-the-top, helped alleviate these problems. In other cases, the constructor began, or was directed to begin, construction work without having the final complete drawings from the architect-engineer -- only to find that some components or structures had to be changed or modified. This led invariably to not just significant cost problems but delay as procedures had to be developed for rework of jobs which were never intended or planned for rework in the first place. Sometimes coordination between the architect-engineer, the constructor, and the utility was poor or poorly managed.  There was a little benefit obtained by some customers, who contracted firms that could act as both architect-engineer and as constructor (sometimes referred to as "engineer-constructor" or "AE-constructor), but such firms, even at the height of nuclear construction in this country, did not have the qualified manpower to take on all the jobs they were offered.

For all of these, and many other reasons, the whole situation in the United States during the years of what we sometimes today call "The First Nuclear Build" was almost constantly in flux, and was throughout its history, subjected to both external pressures and to internal complications.  The difficulties of those years first led to standardized nuclear plant drawings. Eventually, it led to whole standardized nuclear steam supply systems and nuclear plants complete. In today's world in the U.S., a whole nuclear power plant is pre-certified by design before it is even ordered, and only customer and site-specific alterations within permissions are to be made.  Today's new builds are still first-of-a-kind, even though they're designed with a generation or three worth of experience.  We can, and should, hope that with continued experience in construction of today's standardized and design certified plants that inroads will be made on that national average for time-to-construct our nuclear plants here in the United States.