Wednesday during National Nuclear Science Week is devoted to the topic of Nuclear Energy.  Do you know how we use the energy obtained by splitting the atom to produce the electricity that charges up your phone, powers your TV and router, and lights your way?  Click on the link below to see the basics.

Nuclear Energy at the ANS CNSTI Website - A basic introduction

Those are the basics.  But what does a real nuclear plant look like, inside and out?  Let's take a look back at a nuclear plant of "yesteryear," using an original brochure, to find these answers. 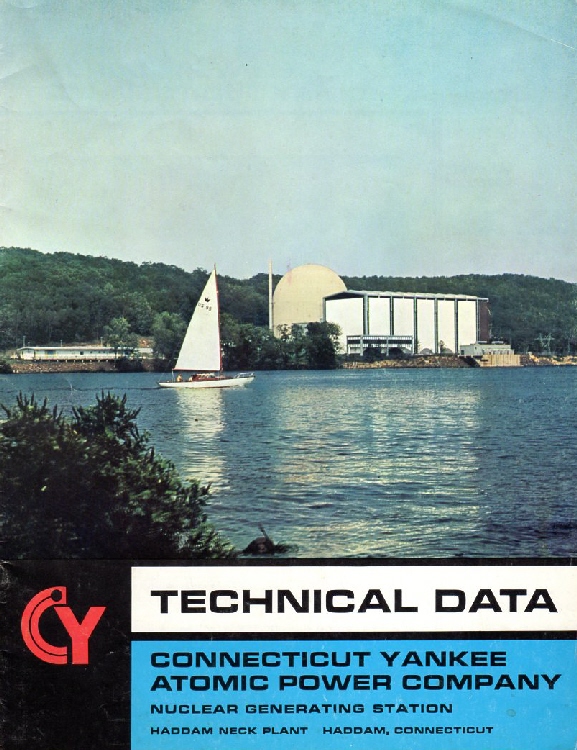 The plant we'll take a look at, Connecticut Yankee, was first proposed in the Spring of 1962.  Several years of negotiations and contractual arrangements between the eleven utility companies that comprised Connecticut Yankee Atomic Power Company, the plant architect-engineer Stone & Webster, the reactor vendor Westinghouse, and the US Atomic Energy Commission led to final contracts being signed in July 1963.  First concrete was poured August 1964 to start the actual construction of the plant.

Why a nuclear plant?  A different brochure (not shown) for the company tells us the answer:

"There are two basic reasons.  The first is economic.  In New England, transportation charges make up a great deal of the cost of fossil fuel (coal, oil and gas) used in steam generating plants.  But with nuclear fuel, because a small amount can generate a large amount of electricity, transportation is not a major cost factor.  For example, seven-tenths of a pound of coal will produce one kilowatt-hour of electricity, but the same amount of nuclear fuel will generate more than 50,000 kilowatt-hours.  And, while construction costs of nuclear plants are higher than costs for conventional plants, their lower fuel costs make nuclear plants economically feasible in a high fuel-cost area such as New England.  The other reason is that, at the rate our fossil fuels are being consumed, we must start investigating ways to conserve it.  Although our reserves are vast, nuclear fuel must be viewed as the fuel of the future."

The brochure cover above shows the exterior appearance of the plant, built on the Connecticut River.  The overall site area was about 500 acres, but the power plant only took up about 15% of the total site; the rest of the site remained in its original, natural condition.  Below we see another, closer view of the nuclear plant and a diagram of the buildings and structures. 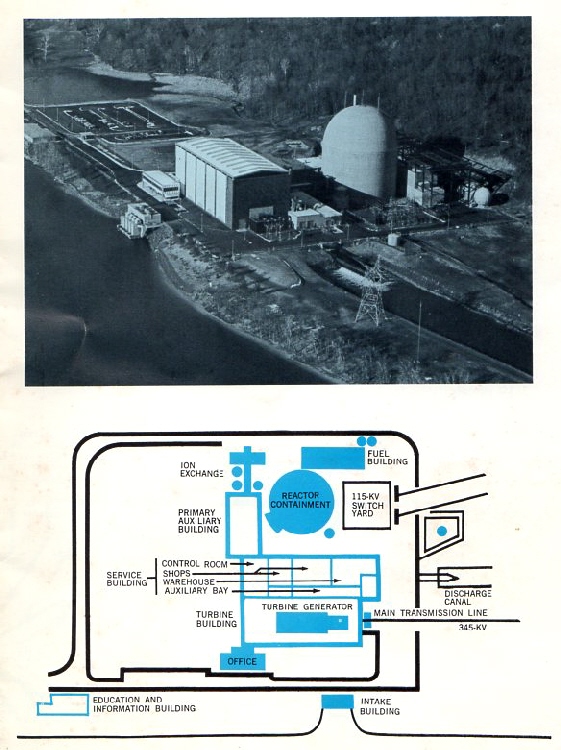 As you can see, the nuclear reactor is actually in the tall, round topped structure called the "containment."  The large machine that actually uses steam to generate electricity, the turbine generator, is in the long, rectangular building called the "turbine building." 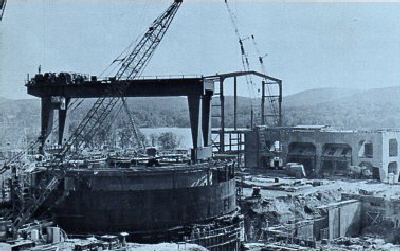 Here's an interesting photo of the nuclear plant under construction.  The base of the containment building is in front of us; it's circular, and you can see that a large rotating crane (which looks a lot like a bridge) has already been built on a ring track inside.  This crane, which was rated to lift 175 tons, will be used to install the reactor vessel and steam generators and will actually be enclosed inside the building when it's finished.  In the background on the right, the large structure being built is the pedestal that will support the turbine generator.  Some of the framing for the turbine building is already going up. 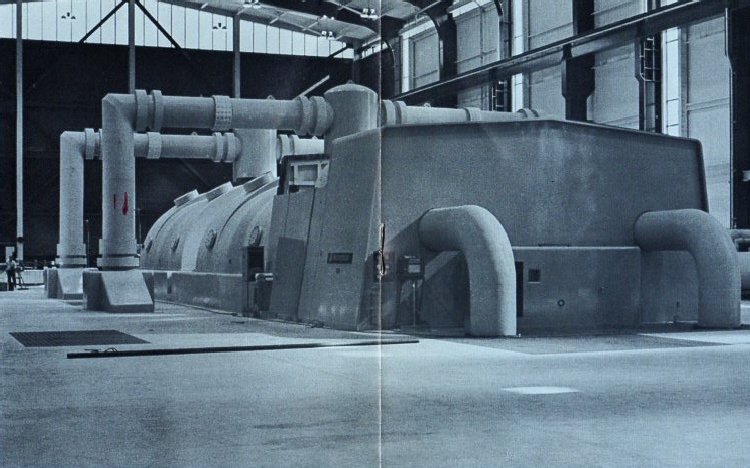 Here's a view inside the turbine building when completed.  This turbine generator had one high pressure turbine (it's under the large, square shield at this end) and two low pressure turbines mounted on the same shaft, with four MSR's (Moisture Separator / Reheaters) in between high and low pressure portions. (They're under the floor.) This machine was rated at 616,200 KW gross (at which the steam flow through it was 7,341,000 lbs per hour.)  That's 826,000 horsepower!  The turbine ran at a constant 1800 RPM, in order to generate 60 Hz electric power just as you receive it at your electric outlet. 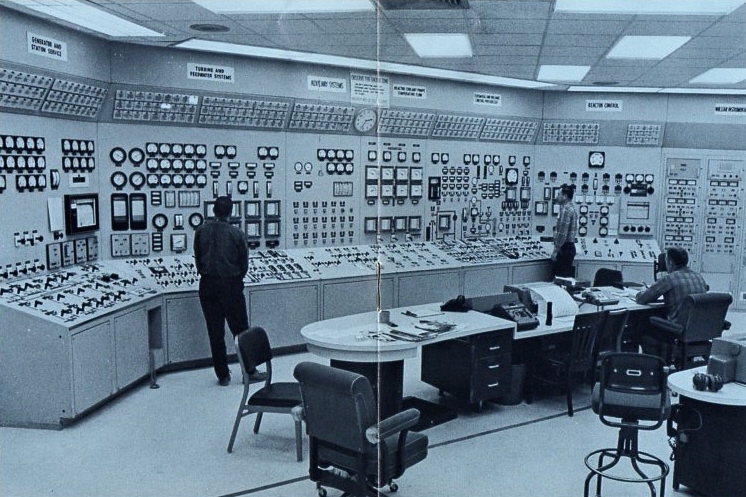 This is the nerve center of the nuclear plant --- the control room.  Although it may look confusing at first, each of the sections of the control panel covers a specific set of functions; see the signs above each section.  In this way, operators can track the flow of water and power through the plant in a very logical way.  The strip of dozens of small, square lights running all the way around near the top is alarm, warning or alert lights for the many monitored functions in the plant.

Most people, of course, never saw these inside views of the plant.  Many did see the view below, though, as they visited the Visitors Center right near the nuclear plant --- a feature which today, in a post -9/11 world, we can only look back on with fondness.  Below, the approach to the visitor center from the back of the brochure. 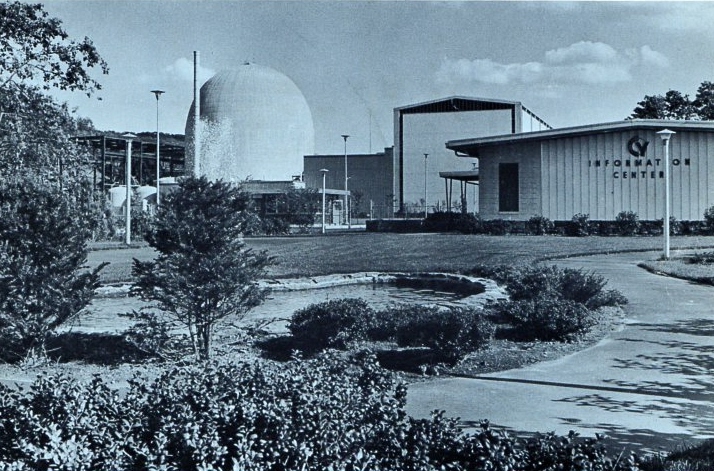 This plant first started up in July 1967 -- about 36 months after the first concrete pour.  The first grid connection was made the next month and the plant provided its first electricity to the grid.  After a period of early testing and modification the plant entered full commercial service in January, 1968.  The plant initially operated with a power limit of 1473 Megawatts, thermal (MWt) for the reactor, which resulted in putting out 490 Megawatts, electrical (MWe) to the grid.  In March, 1969, the plant received from the AEC its full power license, after which it operated at 1825 MWt / 616 MWe.  It operated in a safe and reliable manner for 28 years.

The story of Connecticut Yankee is of even greater interest to us when we find out that what we have seen above is completely gone.  That's right -- this entire plant has been dismantled and removed, and what is left today is a site that looks as if no such thing were ever there.  The plant was shut down for the final time in 1996, and from 1998 through 2007 a very large project was undertaken to decommission the plant.  We can truly see the whole life cycle of a nuclear plant by this example.

Click here to see the official website for Connecticut Yankee.  Make sure to click on the "Decommissioning" link if you'd like to see the process of taking down the plant.  If you don't want to find your way around, click here for some aerial views of the decommissioning.

There you have it!  A quick look at how a nuclear plant works, what one looks like and what the various buildings are, some views inside and finally a look at what happens when you dismantle the plant.  Now - what other questions do you have about nuclear power plants, and nuclear energy?