Editor's Note: Josep Rey Cases is a new nuclear enthusiast writer from Spain. This is his first article on the ANS Nuclear Cafe.

During Franco's dictatorship (1939-1975), nuclear energy seemed a good option to cover the growing energy demands of Spain. That's where everything started in this country.

But after the Three Mile Island nuclear accident in the United States in 1979, some countries reconsidered their bet for nuclear power. One of those countries is my country, the Spanish kingdom.

Some countries had decided to finish their nuclear power plants already under construction but also to stop their nuclear expansion in order to push forward on renewable energies. Spain's government, which was led in the 1980s by the Socialist Party of the Spanish People, decided to immediately stop all plans for additional nuclear power stations. With this decision, a nuclear moratorium was approved in 1984.

As a result, in the same year five nuclear reactors were cancelled from the seven that were already under construction: Valdecaballeros I and ll, Trillo ll, and Lémoniz l and ll, with the last one being 90-percent completed. Other reactors such as Sayago were only "planned". 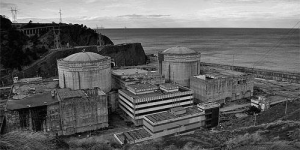 Companies that were involved with supplying and building the power stations sought refunds on their investments, so the Spanish government approved an increase in consumer electric bills (referred to as a "plus") to cover the costs back to the investors. This "plus" is expected to end in October 2015, and all investors should have recovered their investments. The result is that 40 million people will have paid for more than two decades for something that they won't get back in the form of electricity. They will never have gotten benefits for their extra cost.

Despite the moratorium, there are still seven reactors operating in Spain, creating 18 percent of the energy demand during peak hours and a 27 percent during night time. In 2014, Spain's top-ranked electricity producer was nuclear energy with 22 percent of the energy supply, followed by 20.3 percent of wind power and 16.4 percent by coal power.

Despite the fact that both the government and society want options other than nuclear power, I believe that one day the Spanish people will see that renewable energies can't supply a high percent of the demand for long periods of time, meaning that we would need to import more fossil fuels such as coal, gas, and oil to cover our needs (so that the energy price would rise).

Those seven reactors provide a bit of energy independence to Spain. In my view, the solution to the needs of this country are a mix of renewable energies and nuclear energy with III+ generation reactors, which are able to start up and produce electricity at full power within 30 minutes in a safe and an environmentally friendly way. 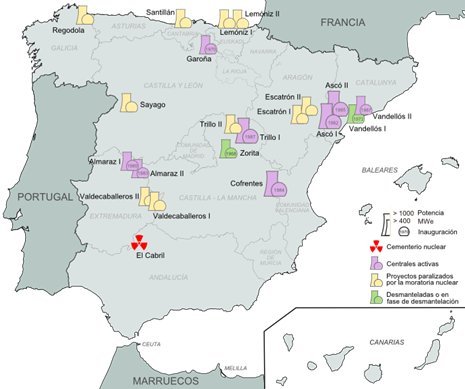 Map of Spain showing the different status of nuclear power plants. In the green area, we can see the decommissioned reactors. In yellow, reactors cancelled by the nuclear moratorium. In purple, active reactors (except Garoña, which has been closed since 2013). There are more than five cancelled reactors on the map, and this is because there were plans for 10 more nuclear reactors (making a total of 17 operative reactors).

Connection to the grid

Note: Ascó II was connected to the grid in 1985; the nuclear moratorium didn't affect this reactor because it was finished in 1984.

When the moratorium was approved in 1984, there were seven reactors under construction: Vandellós II, Trillo I and II, Lémoniz I and II, and Valdecaballeros I and II.

Because Spain's energetic plan was supposed to reach an installed nuclear power of 7600 MW, only two of those seven reactors were going to be fully finished: Vandellós II and Trillo I. Those power plants had been rigorously selected, keeping in mind the social approval of nuclear power near the nuclear facility.

Regarding Lémoniz, the astonishing fact about Spain's nuclear past is that terrorists were a part of the reason that Lémoniz was first delayed more than two years and then ultimately cancelled. The plant director was kidnapped on February 1, 1981. Terrorists warned that they would kill him if the power plant was not cancelled and demolished. The director was found murdered in a forest.

Fifteen months after the director's murder his replacement was found dead even with the added security he was provided. These deaths, along with construction workers killed by bombs and the 1984 nuclear moratorium, ultimately led to the closing of the nuclear power plant. Today, Lémoniz is known as "The Ghost power plant" because of its abandonment.

Although nuclear moratoriums have also been put in place in many countries, I think that Spain has the most shocking and serious dark side of nuclear history around the world. If the moratorium hadn't been added in 1984, Spain today would have 16 full operative reactors, which would supply 16.000 MWe of power 365 days/year 7 days/week. This is enough to cover 57 percent of the power supply during night time, and a 40 percent during day time as of March 2015. With this supply, we would be able to lessen dirty power sources such as gas and coal. Spain could have been an example around the world of an "energy mix", having approximately 50 percent of its power coming from solar, wind, and hydro power and the rest from nuclear facilities.

For me, personally, I think that it is a shame that the Spanish government and the society (due to a lack of knowledge) said "no" to what could save our Earth from overheating and could have helped to provide a cleaner countryside.