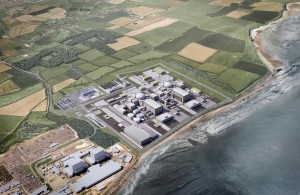 In the midst of many challenging trends for the nuclear industry, two bits of good news happened recently. The US Department of Energy announced up to $12.6 billion of additional load guarantee authority for nuclear projects, and the European Commission voted to allow Britain's Hinkley Point C project (to construct two AREVA EPRs) to proceed.

On September 30, the DOE announced a draft solicitation of up to $12.6 billion in loan guarantees "to support construction of innovative nuclear energy and front-end nuclear projects in the United States that reduce, avoid, or sequester greenhouse gas emissions."While any such project may apply, the DOE said that the focus would be on four key areas, including:

The loan guarantees are authorized by the Energy Policy Act of 2005, and therefore do not require congressional authorization or appropriations. Thus, the DOE has discretion in approving the loans.

Best use of loans?

The Breakthrough Institute believes that the last two areas listed above may be of particular importance, as they may result in quicker CO2 emissions reductions (through uprates and helping to keep existing plants open).

I'm not sure that I agree with this. As for front end (fuel) projects, the price of fuel is not exactly a significant factor in overall nuclear costs.It would seem to me that uprates are something that plants should not have trouble in securing private financing (given that one utility got private financing to build two new reactors). And I'm not sure how the struggles of existing plants (where ongoing operational costs are apparently too high) would relate to the ability to borrow money, at a slightly lower interest rate.

It's probably crazy talk, but my favorite idea for the use of a loan guarantee is not to fund nuclear build projects, but to directly fund supply chain development, as China did with solar panels. (Unlike

the United States, they subsidized panel factories, as opposed to the purchase of panels, resulting in U.S. customers buying Chinese panels with U.S. government money.) Specifically, my dream would be to see loans for construction of an SMR assembly line (probably a light water reactor, like mPower or NuScale). With that seed money, the assembly line could result in module costs low enough so that plant project subsidies would not be needed.

Even better would be for the government to "prime the pump" by agreeing to buy the first module, and put it in inventory. Then it would be sold to a utility customer.When that module is sold, the government would buy another one, etc. The idea is to keep the assembly line running, and ensure, for the customers, that the "construction time" for the reactor (nuclear island) is effectively zero.Just buy it, put it in place, and connect it to the balance of plant.

I keep hearing that construction time is a big source of overall cost for nuclear projects. How does 0 years sound?The government would commit to ensuring that at least one (or a few) modules are in inventory at any given time. It may be possible to get a virtuous cycle going.

After years of discussion and debate, the European Commission ruled, by a vote of 16 to 5, to allow Britain to provide financial support that is necessary for the Hinkley Point C nuclear plant project to go forward. The most notable aspect of that financial support is a guaranteed minimum price of ₤92.5 (about U$148) per MW-hr for 35 years. While allowing the project to go forward, the EU did extract some concessions, including a lower level of subsidy and a stricter limit on potential "windfall" profits for EDF (the company that will operate the reactor).

The EU had threatened to disallow the financial support, on grounds that it may violate EU rules against "state aid" that favor one industry over another (or favor domestic industry over those in other member states). The argument is that such state aid "distorts the market."

A counter argument to the above is the fact that the market does not account for the external (pollution and global warming) costs of fossil fuels. Thus, aid (subsidies) for clean energy sources is not a distortion, but actually correct and existing market distortion. Under similar reasoning, renewable projects have received even larger subsidies, and were simply exempted from the state aid restrictions in question. Thus, the question is whether favoring nuclear over fossil fuels should also be allowed. A related question is whether individual member states should be able to support nuclear, at their own expense, if they choose to.

EU Competition Commissioner Joaquin Almunia alluded to the above arguments while explaining the decision. He said that they concluded that "a market failure exists" and that the project would not have gone forward without support (so it's not just padding the bottom line of a domestic industry). It also seems clear that the EU decided not to interfere with a member state's ability to set its own energy policies, and to support nuclear if it chose to. Perhaps they thought their case was not strong enough, given the inconsistency with how renewables are treated.

Reactions to the EU ruling

Predictably, several EU countries long opposed to nuclear power protested the decision. Both Austria and Germany are considering legal challenges to the ruling. Ireland is also complaining about not being "adequately consulted" on the project.

One has to wonder how strong their case is, given that renewables receive even larger levels of support, and are simply exempt from the rules in question. The Austrian Chancellor at least clarified where they were really coming from when he stated that "alternative forms of energy are worthy of subsidies, not nuclear energy. "Whether or not that sentiment is true, it's not clear if it forms a legal basis for challenge. The EU ruling concerned compliance with EU state aid rules, and whether member states have the right to subsidize favored energy sources; not the relative merits of nuclear vs. renewable energy. It appears that the EU has ruled that they do. I can't see any legal challenge to this ruling that wouldn't also result in renewables subsidies being struck down.

It is also doubtful that Ireland's complaint will amount to anything. One also has to wonder why Ireland feels it should be consulted about a modern reactor in Britain, downwind from Ireland and too far away to have any potential (post-meltdown) impact on Ireland in any event.  Meanwhile, Ireland continues to operate old dirty coal plants, whose pollution generally drifts over Britain, without consulting the Brits about it (I'm guessing).

On the other side, the world nuclear industry, as well as several EU member states considering nuclear projects, reacted positively to the ruling. It is expected that this ruling will serve as legal precedent for other nuclear projects in Britain, as well as nuclear projects being considered in other EU countries such as the Czech Republic, Poland, Hungary, and Slovakia.

While I'm pleased with the EU ruling, and believe that all non-polluting sources (i.e., nuclear and renewable) should be treated equally, I'm still surprised and disappointed in the ₤92.5 per MW-hr (i.e., ~15 cents/kW-hr) that is apparently necessary for a new nuclear plant. Frankly, it should cost little more than half that. The dramatic rise in nuclear costs over the last decade remains very hard to explain (in my opinion). This is true for both construction and operating costs (with even existing plants struggling to stay open, despite how we've always been told that, once built, they are extremely cheap to operate).

If nuclear was less expensive, many of its issues (political, etc.) would go away. And yet, I don't see the industry or anyone else making a significant effort to determine what the causes of this dramatic cost escalation are, let alone doing something about them. As I've stated before (here and here), the industry, policymakers, and regulators need to get together to make a concerted effort to determine what's behind these out-of-control costs and then have an open, objective discussion about what to do about it.

And yes, reforming and/or reducing nuclear regulations and requirements (including many that have been around a long time) needs to be on the table. All requirements need to be objectively re-evaluated for cost-effectiveness. Potential negative impacts of (excessive) nuclear requirements on public health and safety, due to the use of fossil fuels in lieu of nuclear, need to be fully considered in any such evaluation.