Changing How We Communicate

Preface: Robert Rock, a Canadian professional who authored the post you're about to read, is relatively new to the field of nuclear communications but isn't new to communications overall. I believe it's good to get outside perspectives once in a while-they make us think about and reflect upon our own actions. I hope that his piece, specifically written for us here at ANS Nuclear Cafe, can provoke some discussion and help us develop new perspective. Your Editor, Will Davis.

Changing how we communicate.

Participating in a LinkedIn Group called Cool Hand Nuke got me to thinking of the movie that it wittily takes its name from-Cool Hand Luke. Specifically, one of the movie's most famous quotes, "What we have here is ... a failure to communicate"

I think that quote sums up the nuclear industry both at the moment and over the last few decades.

Right now, I see a large amount of people looking for safe, cheap, non-carbon emitting energy, which can produce a large amount of power reliably. Dear nuclear crowd, doesn't that describe nuclear energy? How have we not been able to tap into this desire?

By the very nature of the nuclear industry, we are heavily weighted toward scientists, engineers, and other technical professionals. This is exactly what the industry needs to continue its great track record of safety and reliability.

The flip side is that there are far too few people who are professional communicators. We need these professionals in our industry as well as to improve our ability to connect with our audience.

An analogy that I often hear in the nuclear industry is that we aren't building 1970s reactors anymore. Why do we still want to communicate like it's the 1970s?

First, we need to define our audience. In my personal opinion, we have two major audiences for our message, but they're very closely linked-the general public and politicians. They're linked because politicians can move forward on new nuclear build without public support, while the public won't demand new nuclear from politicians without knowledge of the industry.

Next is our message. As an industry, the question is do we have a clear, concise message that we all believe in? If we do, then I've never heard it. We desperately need to develop that message, but we have to develop that message with our audience in mind. It has to connect to them and satisfy their "what's in it for me" desire. We won't get it right the first time out and that's okay. We need to experiment, learn from other industries, and have some trial and error. This process will improve our connection to the audience.

Finally, after we know our audience and our message, we now need to define the ways that the audience wants us to relay that message to them. That could be social media, blogs, videos, infographics, radio, TV, a combination of some, or all of the above. Again we need to experiment and constantly review the impact that each method has had in reaching the audience.

Our current society has had an explosion in the amount and variety of ways that we are communicating with one another. We "talk" to one another over email, we text, we participate in online groups in Facebook, Google, and LinkedIn, we tweet each other, we watch videos on YouTube, and sometimes we use Skype to have a conversation "face to face".

Taking the 101 and mapping it out, we see the components of communication. The most common problem on the sender side of the message is that what they want to say and what they end up saying is often very complex and often not even totally clear to themselves. The message of the industry is filled with technical information, acronyms, and the science of nuclear. Will our desired audience understand the message? Are we delivering the message using words they understand and in a format that they want?

On the receiver side, if the message is complex, they don't understand it. The reader, listener, viewer immediately wants to know "what's in it for them." If there isn't that connection, then they shut down. This may even include the words the sender has chosen to use in their message (i.e., how many of you non-industry friends know what LFTR or LWR or IMSR stands for?). If they don't understand the message or it's too complex, they most often simply reject it. If we aren't speaking their language, and presenting ourselves in a way that makes "sense and cents" to the audience, they simply aren't interested.

How we can change

We have to connect our good news stories into the current zeitgeist, and that's going to mean some strange bedfellows. The documentary Pandora's Promise really kicked off one of those new strange partnerships linking environmentalists with the nuclear industry. Now before the comment field explodes, I'm not advocating the film, climate change, global warming, or anything else that seems to really upset people in the nuclear industry.

What I am saying though is, this film opened the eyes of a lot of people who have historically been against the nuclear industry. We've done nothing to follow up on that opportunity.

How can we be better?

I welcome your comments and feedback and I hope we all work together to change how we communicate about the nuclear industry. 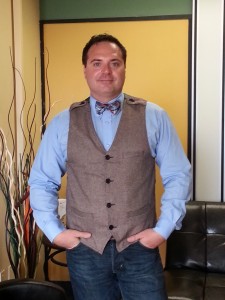 Robert Rock is President of Nuclear Edge, a digital and communications company that specializes in the nuclear industry. He is also President of Environmentalists for Nuclear, Canada and is on the Board of Directors for Environmentalists for Nuclear US, US Nuclear Energy Foundation, and the Durham Strategic Energy Alliance. Robert has worked to get the positive message of nuclear energy out to the public in a variety of means, including strategy development, content creation, advertising, and more. Robert has been a radio host since the age of 18, and has appeared on or hosted many TV shows. His own TV show is "Social Media Learning," and he's the resident expert on Digital Media on Rogers Daytime.