The Environmental Protection Agency's proposed Clean Power Plan has gained favor with some nuclear energy advocates. An extensive analysis of the proposal, however, reveals that current nuclear generating capacity would largely suffer under the new carbon rules. In fact, the results of an evaluation performed by my fellow graduate student Justin Knowles and myself show that 15 states are actually incentivized to shut down all of their nuclear units and replace them with natural gas combined cycle (NGCC) generation. In effect, this plan allows for increasing carbon emissions; a far cry from the stated goals of the Clean Power Plan.

We conducted our analysis after learning about the plan in July while participating in the Nuclear Engineering Student Delegation in Washington, DC. While in Washington, EPA representatives explained to us how nuclear energy was considered in the rule, but admitted that only a small portion of current nuclear energy generation would be credited in a state's emissions rate. The EPA contacts we met with encouraged us to submit a comment of what changes we would make and analyses to support these recommendations. We have been working to understand this plan since then, and intend to submit our analyses with our comment.

Reading the entire 130-page rule is a daunting task, but the root of our concern can be found in the section titled "New and Preserved Nuclear Capacity" (page 34870 of the Federal Register), which states that current nuclear generation is given 5.8 percent credit for replacing fossil-fuel energy. While seemingly arbitrary, this figure comes from an Energy Information Administration (EIA) report that states that six reactors in the United States (equivalent to 5.8 percent of U.S. nuclear generation) are at risk of being shut down. The EPA recognizes that keeping current nuclear generation is the only way this plan will be able to achieve its goal, but erroneously attributes only 5.8 percent of the energy produced from nuclear plants to calculating a state's emissions reduction goal.

The current rule regulates emissions through a state's carbon intensity in lbs/MWh using an equation developed by the EPA for this specific purpose. (For example, the EPA provides a sample calculation for Ohio). As you can see, only fossil fuels, renewables, 5.8 percent of current nuclear generation, and 100 percent of nuclear presently under construction are used in this calculation. The plan then outlines a Best System of Emissions Reductions (BSER) used to calculate what carbon intensity a state can attain if they implement emissions reduction practices. This new carbon intensity is the goal that each state must meet by 2030.

Since current nuclear generation is only valued at 5.8 percent of its energy generation, the loss of one plant in a state has only a marginal effect on a state being able to achieve its goal under this standard. If this rule is intended to be a carbon regulation, then all energy sources should be valued based on their emissions and no technology should be given preference over another. Renewables, coal, natural gas, and others are given credit for 100 percent of their current capacity; nuclear energy should be no different. 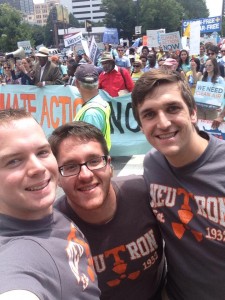 Following these revelations, a triumvirate of three students from the University of Tennessee ANS student section attended the EPA hearing in Atlanta to share our comments on the new carbon regulations and draw attention to the subject. We were very fortunate that each of us was allowed to provide public comments, and the EPA responded by requesting detail on our analyses and an official comment on its plan. Afterwards, one of the panelists requested a conference call to clarify our points and asked for a personal copy of our analyses.

Below you can watch each of our public comments:

To create a fully developed comment, we-with the aid of our advisor, Dr. Steven Skutnik-used the data provided by the EPA to perform our analyses. We simulated a hypothetical scenario in which all nuclear plants were shut down and their generation replaced by natural gas combined cycle units. The results of this analysis were astonishing. By crediting nuclear at only 5.8 percent of its generating capacity, 15 states were shown to have lower emissions rates under the rule as currently proposed when all nuclear generation was replaced by NGCC-a clear indication that the EPA's method of emissions calculations is flawed. By valuing only a fraction of current nuclear generation, utilities are incentivized to shut down nuclear plants in favor of natural gas, the exact opposite of the EPA's stated intent with this plan. Our analysis has exposed a perverse incentive for states to allow the retirement of carbon-free nuclear generation for replacement with carbon-emitting sources.

We must insist that the EPA considers the total generation from all energy sources in calculating carbon emissions intensity. If the EPA gives nuclear energy its full due, then every reactor in the nation must keep running or be replaced with other clean energy sources for a state to meet its goals, making currently operating nuclear units all the more valuable to states. We can make this happen, but only if the nuclear community rises to this urgent challenge, rallying together to push for a fairer, more effective rule that credits current nuclear generation at 100 percent of its current capacity in state-level emissions goals.

I urge each and every one of you to take a look at the Clean Power Plan and submit a comment. The comment period on the carbon rule is open until October 16, 2014, and the final rule will be implemented in June 2015.

Remy Devoe is a graduate student in Nuclear Engineering at the University of Tennessee-Knoxville. He is currently working towards his Master's degree in nuclear engineering and plans to pursue a PhD in the same. His research focus is in nuclear fuel cycles and used fuel management. He is currently the Vice-President of the University of Tennessee American Nuclear Society Student Chapter.

The global nuclear sector is at a crucial point. The future of nuclear power looks brighter than it has in many years, but it is up to us to capitalize on the current momentum and make the...

When the Department of Energy, the state of Idaho, and the Environmental Protection Agency signed a federal facility agreement and consent order in December 1991, the agencies outlined a plan...

Soil and groundwater contamination at the Hanford Site’s 100-BC Area will be treated under a record of decision (ROD) signed by the Department of Energy and the Environmental Protection...