Correcting History Can Be an Uphill Battle

In April 2014, ANS Nuclear Cafe published a valuable historical account and analysis of the Three Mile Island accident titled TMI operators did what they were trained to do.

As author Mike Derivan explained in great detail, the operators on duty at TMI-2 during the early morning hours of March 28, 1979, took exactly the actions that they were trained to take when provided indications of low primary plant pressure, combined with pressurizer water level indication that was "pegged high." That level indicator told operators that the pressurizer was full of water. There were no other direct indications of water level provided.

Derivan has a unique perspective on this historical event; he was the shift supervisor on duty at the Davis Besse Nuclear Power Plant on September 24, 1977, when that plant experienced an event that was virtually identical to the event that initiated the TMI accident. Derivan and his crew initially responded like the crew at TMI; their indications were the same and both crews had been trained to make the same diagnosis and perform the same actions.

The primary reason that the event at Davis Besse turned out to be a historical footnote, while the event at TMI resulted in billions of dollars worth of equipment damage, world-wide attention, and changes throughout the nuclear industry, was that Derivan recognized that he had been trained to make a wrong diagnosis, which led to incorrect actions.

About 20 minutes after his event began, he took a new look at the symptoms his indications were describing and revised his overall diagnosis. That led him to recognize that his plant was experiencing a loss of coolant from the steam space of the pressurizer. He realized that the response of available indicators to that event was unlike the indicator response for loss-of-coolant accidents from any other part of the reactor coolant system. He directed his crew to shut the valves that isolated the stuck power-operated relief valve and to restore water flow from the high pressure injection system into the primary coolant system.

Derivan participated in the required post-event analysis and reporting, so he knew what the Nuclear Regulatory Commission and the plant vendor B&W were told. He was thus uniquely affected by the TMI accident, especially once technical explanations of the accident sequence were available. He spent a considerable amount of time during the subsequent 35 years reviewing the available reports on TMI, trying to understand why the lesson he and his crew had learned in September 1977 had not been absorbed by the operators at TMI.

His conclusion is that the operators never had a chance to absorb and incorporate the lessons he had learned because they were never told that his event happened and never informed how to revise their procedures and training to enable a safer response. Despite all the effort that was put into various commissions and internal lessons learned efforts (Kemeny, Rogovin, the NRC task force that wrote NUREG-0585, etc.), none of the documents clearly state that the specific root cause of the sequence of events that melted 25-40 percent of the fuel material at TMI-2 was that almost everyone associated with pressurized water reactor design and operation misunderstood how the system would respond to a leak in the steam space of the pressurizer.

Unlike any other leak location, a steam leak would provide indications of falling system pressure and rising indicated level in the pressurizer. Since designers, regulators, and trainers assumed that all loss-of-coolant accidents would cause both pressure and pressurizer level to fall, that is what the available training materials-including the computerized simulators-taught operators to expect.

From the start of the accident, operators at TMI were thus placed into a situation that almost no one expected; they did not have an emergency operating procedure to follow. They had strong warnings about not overfilling the pressurizer, so they stopped pumping water into the plant when the level indication showed that the pressurizer was already more full than it should be. That was not an error on their part; it was an error in system response understanding that carried through to all training materials and operating procedures.

It was also an error in processes for sharing operational experience; at the time, the NRC was the only agency that received all reports from operators, so it was the only one that could distribute those reports back out to others that might need the information.

Unfortunately for the hard-working people who chose to become plant operators, the court of public and industry opinion blamed "operator error" as a primary cause of the accident. An excerpt from the history page of the Professional Reactor Operator Society (PROS) provides an operator perspective on how this misapplied responsibility affected members of the elite community of commercial reactor operators.

Remember Three-Mile Island (TMI)? Even if you weren't in the nuclear business in March of 1979, you couldn't have missed all the references since. As markers for change go, the event itself will not soon be forgotten, but more important are the lessons learned on all fronts.

Life was not very pleasant for the nuclear plant operators in the early eighties. The Three Mile Island accident started a chain of reforms in the industry that to a large extent were directed at operators. The basis for change was reported to be that the accident was caused by operator error. That announcement was made to the public almost immediately after the accident began and, as the core was uncovering, every special interest group in the nuclear industry was racing to protect its image.

In the days that followed, a media picture of incompetence in the TMI control room emerged. As we operators picked up the bits and pieces of information, it became clear that the picture was somewhat distorted. The TMI operators were being held accountable for deficiencies that legions of engineers, designers, trainers, and regulators had failed to recognize. Operators everywhere began to imagine themselves in a similar situation and realized that the results would probably be the same.

During the next few years, the industry was deluged with solutions to the "problem" of operator incompetence. The solutions ranged from threats of jail sentences to mandatory college degrees for all nuclear power plant operators. Few thought it was necessary to ask operators what tools they needed to help them operate the plants.

In addition to writing his story for distribution and creating an informative website-Nuke Knews-with his collected wisdom about the TMI event, Derivan recently took one more step in his quest for an improved understanding of why TMI happened and who should bear the responsibility.

He wrote a letter to NRC Chairman Macfarlane asking her to remove "operator error" as the root cause of the accident. His letter and supporting documentation can be found in the NRC ADAMS document database with a search for accession number ML14167A165. The NRC's official response was provided on July 21, 2014, by Thomas R. Wellock, the agency's historian. It is available in the same place with accession number ML14197A635.

Here is a quote from that response letter:

... none of the five major investigations of the accident commissioned by the NRC, Congress, and President Jimmy Carter claimed that operator error was "the" root cause of the accident.

Virtually all of the studies I reviewed agree with your analysis that while the operators committed errors, the chief culprits behind the accident were industry-wide and regulatory flaws. These included a poor understanding of PWR plant response to loss-of-coolant accidents (LOCA), a failure to circulate information about several precursor events at plants in the United States and Europe, flawed operator training and plant procedures, and inadequate control-room design. While you argue that these reports implicitly blame the operators as a "default position," my reading of them indicates they were careful to avoid such a conclusion, and some pointedly challenged the thesis that operator-error caused the accident.

It may be correct, as you argue, that more should have been made of the industry's poor understanding of plant response during a LOCA in the pressurizer steam space, but as you know, the NRC and industry addressed this issue with numerous reforms in training, reporting requirements, and event analysis. In fact, learning from precursor events may be the most important history lesson from TMI. On the 25th anniversary of the accident, NRC Historian J. Samuel Walker published Three Mile Island: A Nuclear Crisis in Historical Perspective. The Davis-Besse event, Walker shows, was a critical missed lesson: "Neither Babcock and Wilcox nor the NRC had taken effective action to draw lessons from Davis-Besse or provide warnings to other plant operators that 'could have prevented the accident' at TMI-2."

In sum, the official reports and NRC histories have been and continue to be in substantial agreement with your overall analysis as to the causes of the accident. Like you, they place the errors committed by the TMI operators in the context of general industry and regulatory failings regarding human factors.

That letter comes close to the pardon that Derivan is seeking, but it might have been better if he had asked for "operator error" to be removed as "a" root cause rather than as "the" root cause.

In the years since the accident, plant designers and regulators have made substantial improvements in their system understanding and in the processes that they use to share lessons learned and operating experience. However, it is still worthwhile to remind everyone, especially as newly designed systems and whole new technologies are introduced, that there is no replacement for a questioning attitude and careful incorporation of operating experience to enable continuous improvement.

There is a useful paragraph on page 2-3 of NUREG-0585 that can serve as a conclusion to remember:

In the Naval Nuclear Propulsion Program, Admiral Rickover has insisted that there be acceptance of personal responsibility throughout the program and that the designer, draftsman, or workman and their supervisor and managers are responsible for their work and, if a mistake is made, it is necessary that those responsible acknowledge it and take corrective action to prevent recurrence. This concept applies equally to the commercial nuclear power program, but it has not yet been achieved. 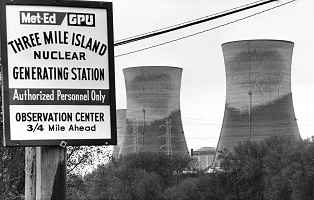 A recent article on a radio station website about an auxiliary feedwater (AFW) pump problem at the Diablo Canyon nuclear power plant led to information exchanges between a reporter, the...