Where Do Nuclear Engineering Students Work After Graduation?

The number of students graduating from nuclear engineering programs continues on a considerable upward trend over the past decade, as shown in the figure below. More recently, total enrollment has dropped 9 percent for undergraduates and 5 percent for graduate students since 2012. The overall trend of increasing graduation rates can likely be attributed to the "nuclear renaissance" in the United States and globally that was gaining momentum around 2008, and thus students attracted to the growth of the nuclear industry at that point would be graduating about now. The slight dip in enrollment rates more recently might be attributable to the accidents at the Fukushima Daiichi nuclear power plant that occurred in 2011, resulting in a slowing down of the nuclear renaissance worldwide. ORISE expects the number of bachelor's nuclear engineering graduates to level to about 600 per year over the next couple of years. 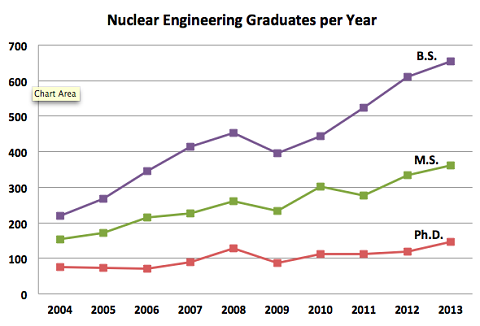 The ORISE survey also included data on where nuclear engineering graduates find employment after graduation. Unfortunately, the post-graduation plans of a third of the total students are unreported or unknown. Another 7 percent report seeking employment. Taking out the unknown data, we can still get some interesting insight into where nuclear engineering students are going after graduation.

First of all, nearly half of graduating students continue with school to obtain higher degrees or serve in a post-doctorate position. This reflects the intense research and technical nature of the nuclear field. As for graduates who seek employment, the chart below shows where students are going to work with different degrees. The government sector includes local, state, and federal government along with military and government contractors. Industry includes working at a nuclear utility or other nuclear-related industry. Academic employment does not include continued study. And the "other" category includes employment in other industries and foreign (non-U.S.) employment.

Lenka Kollar is the owner & editor of Nuclear Undone, a blog and consulting company focusing on educating the public about nuclear energy and nonproliferation issues. She is an active ANS member, serving on the Nuclear Nonproliferation Technical Group Executive Committee, Student Sections Committee, and Professional Women in ANS Committee. Connect with Lenka on LinkedIN and Twitter.