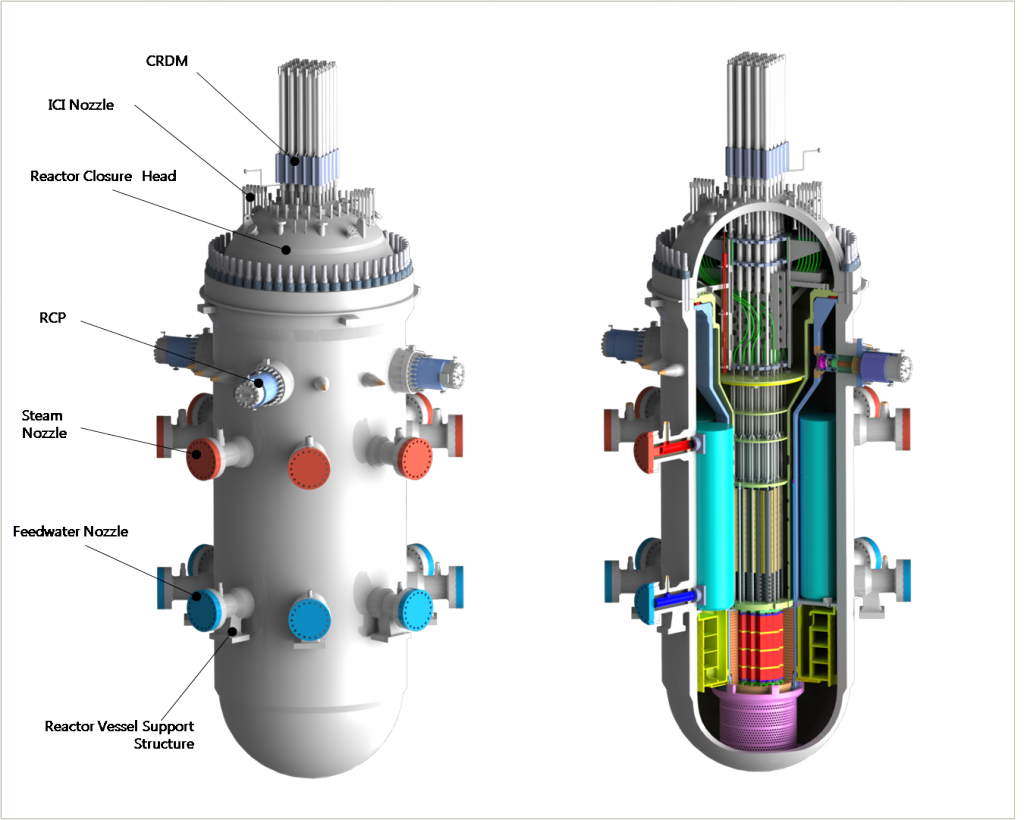 Small Modular Reactors are below 300 MWe output and typically have all components located within the reactor vessel or attached directly to it, as with the South Korean SMART SMR design here

As Topical Meeting Chair Tom Sanders noted at the conference opening plenary this morning, Small Modular Reactors (SMRs) have been a part of ANS Meetings for five years - signaling the importance of these reactors to the industry and to the future of nuclear energy.  Talks this morning further showed the promise of the SMR as a 'game changer' - and in some ways, warned of some perils to be avoided lest the concept die on the vine.

Dr. Sanders explained that a lucrative field in fuel sales to foreign nations which had purchased US-built SMR's could develop, if buy-burn-return contracting were included.  Such contracts could also alleviate proliferation or spent nuclear fuel concerns.  Sanders added that it's up to the industry to convince the United States government that SMR's are worthwhile - and noted the difficulty of the US ensuring safety control or proliferation resistance regarding reactors built overseas which did not come from the US.

Peter Lyons, Assistant Secretary for Nuclear Energy at the US Department of Energy stated unequivocally that the SMR could truly usher in a new paradigm for how we build nuclear plants, but he added that this would not obviate the need for large, gigawatt class reactors in the field of power generation.  Lyons pointed out that 99% of the coal plants in the US that are older than 50 years are below 300 MWe - placing their capacity and replacement solidly in the SMR output range.  Lyons gave DOE expected figures for SMR plant costs at roughly $4700 to $6000 per KWe, or about $900M to $1200M total for a 200 MWe plant; he compared this to a total cost of about $5B to $7B for a gigawatt class nuclear plant.

In an interesting observation, Lyons said that he believes that eventually the economies of mass production for SMRs may roughly equal in importance the economies of scale which drive utilities toward very large, powerful reactors.  While the first few orders for SMR plants would not be enough to convince a vendor to construct and operate an automated factory for building these plants, SMRs will be built with present or expanded resources and facilities until orders of 'several plants per year' are on the books, at which point large dedicated facilities would be built, to realize the full economies of SMRs.

Lyons observed that in the United States we'll need about 50 GWe of new generating capacity just to replace coal plants alone in the decades to come (hinting at openings for SMR plants), and that the Executive Order for DoD sites to reduce carbon footprint might also open the door for government/DoD ownership of SMR plants somewhere down the line.

As always, Bruce Lacy of Lacy Consulting gave an excellent, detailed talk - this time on the economics of nuclear power in general, as well as SMR plants specifically, as viewed by actual investors on Wall Street.  Lacy's remarks, far too voluminous to reprint here, contained great pieces of information for those interested in SMR plants - and for those who wish to build them.

Lacy made it clear that in the vast majority of cases, Wall Street investors aren't against nuclear power - however, they are against impractical or risky investments.  Lacy said "they're against giant projects that are a large percentage of a company's balance sheet, have an open-ended completion time, and are faced with regulatory uncertainty."  He pointed out that investors looking at a company that wishes to build a plant would "like to see a balance sheet at least five times the cost of the nuclear plant project."  This rules out very many companies for large gigawatt class plants.  What all of this means, of course, is that investors may well be interested in SMR's which will have, in theory, vastly lower costs per unit.

Lacy pointed out that Wall Street views government funding not as a guarantee that a project will launch and continue, but rather as a fleeting resource which can disappear at any time.  While government lends to solar and renewables now, if and when the funding is taken away, Wall Street will still invest money somewhere else.  It's here that nuclear in the form of SMRs or, perhaps for large utilities or utility groups, large commercial plants, has an opportunity.

Lacy made a number of points about prospects in the coming years for the SMR market, and while some were familiar (for example, the concept that SMRs must be viewed, right out of the box, as a truly global industry), one stood out above all: avoid hype.  The nuclear industry should "under-commit and over-perform" to retain credibility with investors, who are familiar enough with overruns and cancellations in the 1980's to run at the sound of hype.  Incidentally, Lyons reported that an announcement on a 2nd round of SMR R&D funding would be "soon."

The opening speeches at the SMR topical meeting once again showed that the door is in fact open to SMRs as a concept.  Progress remains slow - painfully slow for some of us.  Much work remains to be done, but in measured ways, all signs still remain "go" from just about every perspective - which, during this current season of nuclear rollbacks, cancellations, and even plant closures, is good enough news for now.

SMR plants have been discussed, as noted above, for use as direct replacements for coal-fired plants.  Small nuclear plants were already built, many years ago, that were actually added on to existing steam plants.  Read an extensive ANS Nuclear Cafe piece on such plants

SMRs were discussed in-depth at an ANS Winter Meeting last year in San Diego.  Read about that event by clicking here

Nuclear power from small modular reactors should be a central part of the chemical industry’s drive toward achieving carbon neutrality, according to Jim Fitterling, chairman and chief...

The Tennessee Valley Authority and Oak Ridge National Laboratory have signed a memorandum of understanding to advance decarbonization technologies in pursuit of the federal government’s...

A Montana citizens group has failed in its effort to repeal H.B. 273, a recently enacted law that transfers the power to authorize the construction of nuclear power facilities in the state...