From October 30 through November 1, 2013, a group of about 150 people with questioning attitudes about small, modular reactors (SMRs) met in Idaho Falls, Idaho.  They were treated to a number of presentations that described the technical progress that has been made so far and also provided a realistic, sobering look at the long, challenging development path that must be traversed to allow the technology to begin contributing to the world's energy security.

A wide variety of organizations sponsored the meeting; there were reactor vendors, several supplier companies, and a couple of focused development organizations from Missouri.  (Come to think of it, the active involvement from the "Show Me" state might have had something to do with the fact that the meeting addressed a lot of hard questions with open-ended answers rather than being dominated by optimistic sales pitches.)

Though the Idaho National Laboratory (INL) was not a conference sponsor, it was an active participant.  On the first day of the event, the Lab provided a tour of several of its historical and operating facilities, including the EBR-I, the Advanced Test Reactor, and the Hot Fuels Examination Facility. 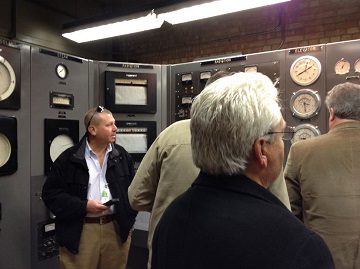 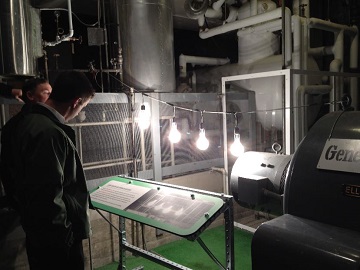 The INL facilities tour also included several in-town labs in Idaho Falls that perform research that does not require the isolation of INL's desert facilities.  One of the most impressive facilities on that tour was the Human Systems Simulation Laboratory (HSSL).  It is a fully reconfigurable, digital representation of a nuclear power plant control room with impressive fidelity.

According to the technicians supporting the tour, it is possible to shift the HSSL from one plant's control room to another in approximately 30 minutes.  As a national lab, INL has been able to develop agreements and relationships with a number of different simulator vendors and utilities.  INL is a trusted agent that has shown that it can help distribute important operating experience that should be shared and protect intellectual property that should not be shared.

Our tour guides "took the fifth" with a chuckle on a question about the ability of the HSSL system to display commercial high-definition TV (there was a World Series game scheduled on the day of our visit).

John Grossenbacher, the Director of the Idaho National Laboratory, gave a talk that identified several important contributions that the national labs, his own in particular, can make to the development of small modular reactor technology.  He reminded the attendees that there is plenty of space within the 860 square miles of lab property to site first-of-a-kind reactors if needed.  Several INL scientists participated in the conference, including Dr. Piyush Sabharwall, who was recently featured in an ANS Nuclear Cafe post about his selection as the 2013 Young Member Excellence Award recipient.

Jeff Sayer, the Director of the Idaho Department of Commerce and Chairman of the Leadership in Nuclear Energy Commission 2.0, served as the master of ceremonies for the conference.  Throughout the event, he reiterated his home state's long history in nuclear energy development, its record of having been the site for more than 50 first-of-a-kind small reactors, and its interest in continued involvement in nuclear energy development.

Brad Little, the Lieutenant Governor of Idaho, provided a luncheon address that reinforced what Mr. Sayer had been telling us.  Unlike many politicians when invited to a technical conference, he attended the entire day's sessions and incorporated some of what he heard in the morning in his enthusiastic and engaging talk.

Based on the number of references by other speakers after she gave her talk, Andrea Jennetta, the publisher of Fuel Cycle Week, certainly made a lasting impression.  Her talk was titled "Industry Observer, Provocateur - Uranium Saves Lives... And Other Shocking Truths about the Science and Politics of Nuclear Power."  Among her many memorable points was an admonition to nuclear technology promoters to remember that there is "no 'R' in safe."  That is, she asked people to stop trying to sell their systems based on the idea that they are "safer" than the existing systems - that have not exposed anyone to dangerous radiation doses in 50 years.

Aside:  Jennetta has several more people to convince, including the NRC and the scientists that recently wrote a pronuclear letter titled To Those Influencing Environmental Policy But Opposed to Nuclear Power.  End Aside.

She also made the bold statement that nuclear energy's ONLY obstacle was POLITICS.  Several later speakers stated that they believed that economics was an equally important obstacle, but Andrea insisted that most of the most difficult economic challenges have been imposed by political processes.

Paul Genoa, Senior Director of Policy Development for the Nuclear Energy Institute, described the importance of improving the dysfunctional markets that have resulted in the recent decision to close two, relatively small, existing reactors.  He agreed with many of the motivations for building smaller, simpler, factory-produced power plants, while also offering a warning that there might not be a market if we all do not work together.  He recommended action to fix the way that existing market rules place little or no monetary value on important characteristics like voltage support, steady baseload, and ultra low emissions, all of which are strengths of nuclear energy.

Finis Southwirth, the Chief Technical Officer for AREVA, described his company's expertise in supplying a wide variety of nuclear fuel for existing power plants and offered the somewhat surprising fact that qualifying a slightly modified light water reactor fuel might cost $100 to $200 million, while qualifying a brand new fuel for a different kind of coolant might require $1 billion and at least 10-15 years worth of lead time.  That explains why all of the SMR projects that are planning to have commercial offerings before 2025 are light water reactors using only slightly modified fuel.

Newport News Shipbuilding (NNS) had three representatives at the event.  Bob Granata, Vice President, Operations and Technology Development, informed the power plant vendors that shipbuilders have been manufacturing and assembling modular nuclear systems for many years.  He described how the current process for building Virginia class submarines has some modules of the ship being made by Electric Boat Company in New England and others being manufactured by NNS in Virginia.  The key to the program's success is design and processes that ensure that those modules fit together.  The shipyard is ready for orders to "bend metal" whenever the vendors have finished their designs and found power plant customers.

Mike McGough, Chief Commercial Officer of NuScale Power, described his company's history and unique technology.  The NuScale concept of building a 540 MWe power plant from a collection of twelve identical, independently contained, natural circulation 45 MWe reactors, each with its own power turbine is quite different from any of the other proposed systems.  As McGough reminded everyone, NuScale opened up its initial licensing dialog with the NRC in 2008.  McGough claimed to have been happy that NuScale was later joined in the race to commercialization by B&W and Westinghouse as they each recognized the potential value of the smaller reactor market.

Throughout the event, it was apparent that the state of Missouri is very interested in the potential of SMRs as a statewide development effort.  It was difficult to join any small group conversation without it including someone from a Missouri organization; there were representatives there from the state economic development office, from several universities, from Ameren, and from several potential suppliers.

Missouri has formed a strong, bipartisan coalition with those groups plus support from a Republican legislature, a Democratic governor, and the public power cooperatives.  The state has selected Westinghouse as its partnering vendor; everyone I talked to is eagerly awaiting the announcement of the selection for the second Department of Energy SMR Funding Opportunity Announcement (FOA), believing they have made a very strong case.

One of the best things about the event was the opportunity to engage in frank discussions with experienced people who understand that major new developments do not happen quickly in the nuclear energy industry, but who also understand the importance of making steady progress.  The vendors all acknowledged that their systems will be tough sells in the US under conditions of current natural gas prices, but a number of attendees reminded everyone that no one really knows what natural gas prices will be in the 2022 to 2025 time frame when the first SMRs will begin commercial operations.  Even more importantly, no one knows what the prices will be during an SMR's 60-year lifetime.

As some speakers pointed out, natural gas prices in Europe, parts of South America, and the Far East are already high enough to encourage a reasonably high level of excitement about SMR development.  With ongoing concern about climate change, it is always worthwhile to invest in a zero emission power source that can compete with methane (aka natural gas).  That fuel's climate-related boast is that it is... only half as dirty as coal.