From July 7 -12, 16 students from around the country came to Washington DC to talk with politicians and policymakers about nuclear engineering education funding, energy policy, and other nuclear issues as part of the 2013 Nuclear Engineering Student Delegation (NESD). This year the delegation was comprised of students with especially diverse backgrounds, including nuclear engineering, chemical engineering, materials science, and nuclear safeguards policy. The chair of the delegation was Matthew Gidden, a Ph.D. candidate at the University of Wisconsin-Madison studying nuclear engineering and energy policy. He was assisted by two co-vice chairs: Mark Reed of the Massachusetts Institute of Technology and Nicholas Thompson of Rensselaer Polytechnic Institute.

The NESD began in 1994 as a response to deep cuts in funding for nuclear research reactors in the fiscal year 1995 budget. Funding was ultimately restored to the program in part due to the efforts of these first delegates. Following this initial success, the NESD has returned every year to bring the voice of nuclear engineering students to Washington. This year, we had the distinct honor to meet with key governmental affairs staff at Areva and from the Nuclear Energy Institute, high-level staff at the Department of Energy's Office of Nuclear Energy, four of the five Nuclear Regulatory Commission commissioners (including the chairman), non-proliferation experts at the Department of State, budget staff at the Office of Management and Budget, congressional staff on the Natural Resources and Environment and Public Works Committees, and over 100 congressional offices including some meetings with representatives and senators in person. 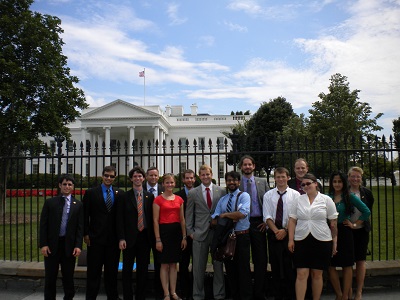 First, the entire group gathered in a meeting room at the hotel and spent the first hour or so talking about what we considered to be the important issues facing nuclear engineering education. After everyone had a chance to express their thoughts, the chairs gave a quick recap of everything that had been discussed. The delegates emphasized two subjects: continued funding of the Integrated University Program and passage of the Nuclear Waste Administration Act. A number of other issues were addressed, including domestic fusion research funding, energy policy, nuclear export agreements, and neutron detectors for port security. After the break for lunch, the delegates divided back into groups and drafted each section of the policy statement. At the end of the day the group edited the sections together. The delegates read the combined document and agreed upon its content by consensus. Throughout the week, the delegates distributed this statement in meetings with congressional offices and other organizations. This year's policy statement can be found here.

On Monday morning, the delegates had their first meeting with the governmental affairs staff of Areva. The meeting began with a general presentation by the vice president of governmental affairs on Areva's international business portfolio. The Areva staff gave a presentation about the mixed-oxide fuel project and its importance to our joint arms reduction commitments with Russia. They also discussed the business importance of being active in policy discussions in DC. The morning concluded with a discussion with Mary Alice Hayward on her experiences in nonproliferation and the importance of technical expertise in international agreements.

On Monday afternoon, the delegation visited the Nuclear Energy Institute. Leslie Barbour and other staff members described the function of NEI and how the organization operates. They then discussed the importance of building and maintaining relationships with congressional staff. They also explained NEI's surveys and data on the nuclear workforce. We ended the meeting discussing our policy statement and received helpful feedback.

On Monday evening, the delegation had dinner with Lara Pierpoint (American Association for the Advancement of Science congressional fellow working for Senator Ron Wyden, D., Oregon) and Ron Faibish (science fellow for the Senate Committee on Energy and Natural Resources). These young scholars shared their experiences on the Hill and specifically spoke about their efforts in crafting the Nuclear Waste Administration Act.

On Tuesday morning, the delegation visited the Department of Energy to meet with the Office of Nuclear Energy. The program leads for NE's Fuel Cycle R&D, Light Water Reactor Technologies, and Nuclear Engineering University Program (NEUP) discussed the myriad of funding and programmatic opportunities for research provided by NE. The staff discussed some of the priorities in specific research areas and the importance of Integrated University Program (IUP) funding. Brad Williams spoke about the various forms of funding for graduate education, discussing the NEUP Scholarships and Fellowships (funded through the IUP) and the research grants that provide graduate research assistantships at specific universities. We then had lunch with Pete Lyons, the DOE's assistant secretary of energy for nuclear energy, who shared his perspective on how DC operates and the importance of nuclear engineering research to our nation's future.

On Tuesday afternoon, the delegation went to the Nuclear Regulatory Commission headquarters in Rockville, Md. The delegation met with NRC education staff, who described the various methods by which the NRC provides educational enrichment opportunities to universities-through graduate fellowships, undergraduate scholarships, and curriculum development grants. The staff discussed internal metrics used to ensure the effectiveness of the programs and reiterated that none of these programs would be possible without the IUP. We also had the great fortune of meeting with three of the commissioners: Chairman Allison Macfarlane, Commissioner George Apostolakis, and Commissioner William Ostendorff. We had very robust discussions with all three commissioners about many different topics, including small modular reactors, Gen-IV technology, linear no-threshold dose, IUP funding, and commercial reprocessing.

The delegation's annual meeting with the Office of Management and Budget on Wednesday afternoon was the most notable in recent memory. Christine MacDonald, one of the employees responsible for allocating DOE funds, discussed current budgeting. A representative from the National Science Foundation (NSF) discussed the President's Science, Technology, Engineering & Math initiative, NSF fellowships, NEUP, and IUP. The delegation provided recent statistical evidence showing that the majority of nuclear engineering graduate students work for the U.S. government after completing their studies, effectively communicated how NEUP and IUP have helped increase the attractiveness of the nuclear field to graduate students, and provided numerous examples of how IUP has allowed students to conduct important nuclear research that would not otherwise be funded.

On Wednesday evening, the delegation had dinner with Commissioner Magwood, who cares deeply about student issues. We discussed our meetings with the other three commissioners, recent events in the nuclear industry (e.g., shutdown of San Onofre and Kewaunee), and the IUP and the NRC's role in education and workforce development. Magwood imparted wisdom from his past experiences as chairman of the Generation IV International Forum and working with the Fast Flux Test Facility.

On Thursday and Friday, the delegation accomplished its main objective on the Hill. Delegates met with or dropped by the offices of all 100 senators as well as 42 representatives. The delegates also personally met with five senators (Maria Cantwell, D., Wash.; Patty Murray, D., Wash.; Jeff Merkley, D., Oregon; Mike Lee, R., Utah; Tom Harkin, D., Iowa) and five representatives (Ralph Hall, R., Texas; Steve Stivers, R., Ohio; Chris Gibson, D., N.Y.; John Garamendi, D., Calif.; Bill Flores, R., Texas). The remainder of meetings took place with congressional staffers and committees. The delegation's presence was well received and there were many conversations and an overall interest in learning more, leaving us with the impression that our efforts indeed left a mark of influence this year. In particular, as our visits earlier in the week to the NEI, NE, and NRC showed broad support for the Nuclear Waste Administration Act, many of the congressional offices were interested in learning more about the bill or already supported it. Some memorable discussions included one with Senator Feinstein's office, which is working on the Nuclear Waste Administration Act. They stated that nuclear waste storage issues are more political than technological, and that they are open to implementing nuclear power in the future to reduce carbon emissions if a waste storage solution is adopted. In addition to discussion of our statement, delegates also had the opportunity to discuss other nuclear-related topics and applications such as nuclear desalination and nuclear development of U.S. oil shale. Delegates established relationships that will be extremely valuable in the future, and we look forward to observing the delegation's impact as the year progresses.

Thursday night we were pleased to have dinner with ANS/AAAS fellow Vincent Esposito and Annie Caputo of the Senate Committee on Environment and Public Works. Esposito gave some great career advice and talked about some of the legislation he's been working on.

The following morning, we had breakfast with Leslie Barbour of NEI and Craig Piercy, the ANS Washington representative. Piercy talked about the ongoing challenges with Yucca Mountain and the need for people with technical experience coming to Washington.

This was one of the best NESDs in recent memory, and it would not have been possible without the help of many individuals and organizations. We'd like to especially thank Leslie Barbour for her instrumental role in facilitating meetings and for her continued support and guidance of NESD over the years. The NESD would also like to thank NEI and ANS for supporting the NESD financially, as well as the individual institutions of each of the delegates for supporting their travel expenses. We would also like to thank the other organizations, offices, congressmen, and other officials with which we were able to meet; each meeting brought different insights and points of view to these issues. The NESD is always looking for enthusiastic and articulate technical leaders with a desire to influence policy. If you are interested in being part of the NESD or meeting with us next year, please visit our website or email us. 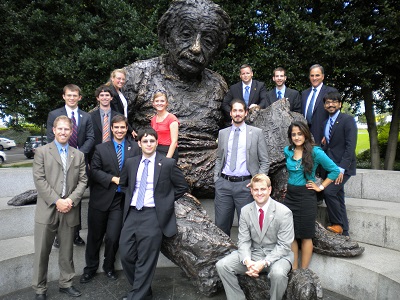 Matthew Gidden is a Ph.D. student in nuclear engineering at the University of Wisconsin-Madison. He is a member of the Computational Nuclear Engineering Research Group under Professor Paul Wilson, and his research focuses on modeling and simulation of the nuclear fuel cycle.

Nicholas Thompson is a Ph.D. student at Rensselaer Polytechnic Institute studying nuclear engineering and science. His current research is on using a lead slowing-down spectrometer to measure various nuclear data at the Gaerttner Linear Accelerator Center.