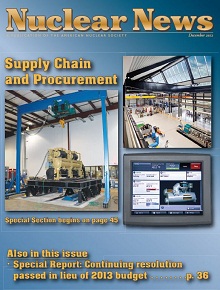 This issue also features a special report: "Continuing resolution passed in lieu of 2013 budget" on risks to nuclear from possible federal sequestration cuts.

Don't go a month without your Nuclear News!

This month’s issue of Nuclear News focuses on the role of probabilistic methods in assessing and mitigating the risk of adverse events at nuclear plants and facilities. It’s a timely topic...

It’s like clockwork. In June of every year, the American Nuclear Society brings in a new elected leader for the next 12 months. I’m Steve Nesbit, the latest in a line of distinguished (and...