Public Service Board hearing a success

Supporters and employees of the Vermont Yankee nuclear power plant mounted a successful appearance at a Public Service Board hearing on November 7 in Vernon, Vt. This was to be the only face-to-face meeting between the board and the public in the process for a new Certificate of Public Good, required for continued operation of the plant. The hearing appearance was judged a success, due to the 3 to 1 margin of supporters to opponents and subsequent balanced press reporting.

The Public Service Board hearing was announced a few months in advance, so there was time to notify supporters and plant staff and plan for our appearance. The plant notified and encouraged supporters, employees, and unions. Groups notified included the ANS Grassroots Project, Vermont Energy Partnership, Ethan Allen Institute's Energy Education Project, and others. These groups notified their mailing lists and Facebook pages. For example, see this blog post by Meredith Angwin. 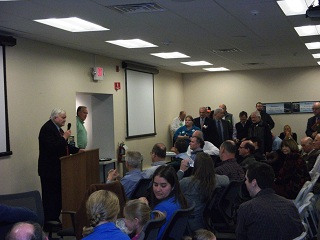 Governor Salmon at the briefing

The Vernon Elementary School is a short walk from the Governor Hunt House. The gym is the only large meeting room in the town. Public meetings concerning the Vermont Yankee plant are held here by the Nuclear Regulatory Commission and the state of Vermont, as well as at locations in Brattleboro, Vt. 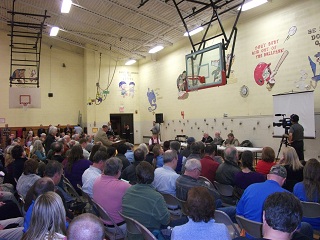 The doors opened at 6:30 and the board and staff arrived soon after. Sign-up lists for speakers were on a first-come basis, so supporters and opponents moved quickly to get in line. Eighty speakers signed up. The hearing had been announced in advance for 7pm-9pm, but the board extended the hearing to 10pm. About 300 persons were in attendance.

The board allotted two minutes per speaker. Testimony was recorded by a court reporter. Testimony could also be submitted by e-mail and letter, as long as the docket is open, the board said. We encouraged supporters to bring written testimony and submit it to the board at the hearing, even if they also spoke. Also, there was a risk that they would not get the opportunity to speak, in which case their written testimony would become even more important.

The board is a quasi-judicial body, providing Certificates of Public Good to all utilities. The Public Service Department, under Vermont's governor, oversees utilities, and serves as the public's representative before the board. The board stated that the information provided by the public is not evidence, but is used to inform its questioning of witnesses. It was also stated that radiological and nuclear safety are not in the board's jurisdiction, so that these topics should not be addressed. (A few of the opponents did, anyway.)

The speakers were timed by a board member, given 15 seconds warning, and cut off when their time was up. A few took less than the allotted two minutes. 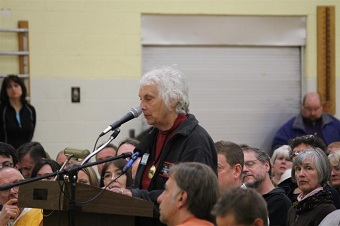 Opponents raised all the usual non-nuclear issues: company trustworthiness; emergency planning and evacuation; climate change; weather events; conservation, efficiency, alternative energy; and the river ecosystem. A new objection, strangely, concerned the cost to Vermont of the Emergency Plan. This is strange since the Vermont Yankee plant funds the emergency plan. Without the plant, taxes would have to support the plan.

Supporters stressed the great economic benefit, the increase in CO2 emissions that would result without the plant, the benefit of baseload power to the grid, the grid as a shared responsibility, and the contribution of plant employees to the area as citizens. It was noted that the plant's direct charitable contributions are quite significant.  [Readers are strongly encouraged to visit Yes Vermont Yankee to read the ongoing series of excellent written testimonies and guest posts in support of continued operation of Vermont Yankee.]

Vernon residents, including plant employees, spoke of their trust of, and comfort with, the plant. Patty O'Donnell, of Vernon-Selectboard chair and a former 12-year state representative from the town-also spoke of the town's comfort with the plant. She said that no amount of money, i.e. economic benefit, could convince the town to favor the plant if residents did not feel the plant is safe.

Nuclear power supporters are out there. With organization and support, they will come forward and join in the political fray.

Plant employees are the best advertisement there is. One employee spoke of living in Vernon, and having his wife teach at and his child attend the school (about a half mile from the plant). Over the past decade, several scientific public opinion polls in Vermont have consistently shown that 65 percent of the public feels "people who work at the plant" are the most credible and trusted source of information about plant safety and operations.

Supporters need to gather and socialize. Refreshments or food is needed for morale (to prevent the "brownie deficit" syndrome). Anti nukes always have food.

A great deal can be accomplished with management support, at minimal cost.