The MTR—Gone now, but not forgotten

Recently, Dr. Nicole Stricker of the Idaho National Laboratory sent a link for the following video to members of the ANS Social Media list.

The entire video is quite interesting, but my interest was tweaked during the time frame 3:23 to 3:28 in the video by what looked like a reactor vessel being tipped over during decommissioning of a nuclear facility; the voice-over at the time is talking about just that. A request for information revealed that the reactor shown at that moment in the video was the Materials Testing Reactor, or MTR.

I had known that the MTR had been long shut down, but was really unaware of its present status. The MTR has a place in nuclear history in the United States as the first widely available test reactor; according to The Atomic Energy Deskbook, the MTR was designed jointly by Oak Ridge and Argonne National Laboratories.  Blaw-Knox acted as architect-engineer, and the plant was built by the Fluor Corporation.

Let's let the words of Phillips Petroleum Company, which operated the MTR for the Atomic Energy Commission, describe the facility; they're found in the booklet (in my collection) whose cover is reproduced below. 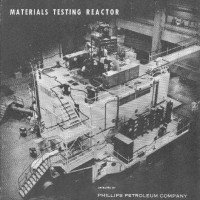 "The Materials Testing Reactor is a unique and versatile research tool. It was designed and constructed as a pioneering step in the development of high neutron intensity reactors with the primary purpose of providing facilities to test the effects of neutron bombardment on materials of interest in future reactor construction. It has neutron fluxes 10 to 100 times greater than those in other reactors. As a result, it can provide radiation at a very high dose rate and produce isotopes with higher specific activity than those now available from other sources. 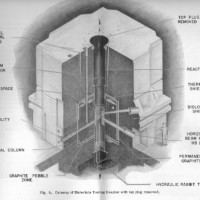 The enriched uranium fuel is contained in an active core which is inside a lattice region 40 by 70 centimeters in area and 60 centimeters high (16 x 28 x 24 inches). It is surrounded by a 40 inch high reflector of beryllium pieces. Both lattice and reflector are enclosed in a 55 inch diameter aluminum tank which is extended by stainless steel sections above and below to form a 30 foot deep well which is closed top and bottom with heavy lead filled steel plugs.  ....The reactor lattice and beryllium reflector are cooled by water flowing at a rate of 20,000 gallons per minute. This water enters near the top of the well at 100F and leaves near the bottom at 111F. The water is fed by gravity from a 170 foot high tank through the reactor tank to a vacuum spray evaporator system for cooling and degassing, then is pumped back to the tank."

According to contemporary documents from Sylvania-Corning Nuclear Corporation in my collection, fuel elements for the MTR were "93% enriched uranium alloyed with aluminum, clad in aluminum, and formed into curved plates approximately 24" long, 3" wide and 1/16" thick. The fuel element consists of nineteen such plates brazed into aluminum side plates to form a boxlike assembly approximately 3" x 3" in cross-section. Aluminum adaptors are welded to the ends of the fuel element. Each element contains 200 grams of U235 and normally 25 such elements fuel the reactor." 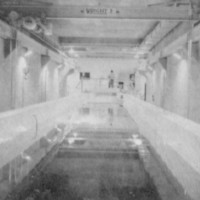 "The gamma field is provided by used MTR fuel elements, which are stored under water until they have cooled sufficiently to be transferred to the chemical processing plant for recovery of U235." At left, the original MTR canal where gamma irradiation was performed, which offered, according to Phillips, gamma fields up to 10^7 roentgens per hour.

The MTR first began operating in 1952-although, according to the excellent "Proving the Principle" (Susan M. Stacy/Idaho Operations Office of the Department of Energy, 2000), the plans were started for what became the MTR as early as 1944. The MTR, when placed in operation, quickly found itself with a list of experiments to perform and samples to irradiate. According to documentation provided by Erik Simpson, CWI media spokesman, the MTR performed over 15,000 irradiation experiments during its operational lifetime.

The MTR operated successfully as one of the most highly in - demand test reactors for many years. Time caught up to the MTR in 1970; according to "Proving the Principle," the final experimental plutonium core (nicknamed "Phoenix") was operated in the reactor through April 23, 1970, when the reactor was shut down. One final experiment in August 1970 saw the MTR go critical again for 48 hours when Aerojet, by then the MTR contractor, started it up for paid research into mercury contamination of wildlife. But that was it. The reactor never operated again.

The reactor was defueled, and parts of the facility were used for other purposes (some functions even going on next to the shutdown reactor itself without involving it) for some years until the DOE made the decision in 2005 to dispose of the facility. Erik Simpson has provided us with a copy of the 2007 Engineering Evaluation/Cost Analysis for the Materials Test Reactor End-State and Vessel Disposal; of the various site solutions described in this document, the one chosen and carried out is the one that called for removal of the above grade structure, the reactor vessel, and below-grade structure with the vessel being stabilized and stored onsite at a dedicated facility.

Erik provides us with two fascinating links that show much more than we saw in the opening video of the decommissioning of the MTR facility. In the first video link, we see a number of activities of the Idaho Cleanup Project; the MTR facility is seen in this video at the time frame 1:15 - 2:30. The second video link gives us a mostly time-lapse view of the demolition of the MTR reactor building (with the large internal shielding and beam tube/sample tube complex, as well as reactor vessel and tank extensions already gone), but slows to real-time to display the explosive demolition of the roof structure.

It goes without saying that in terms of the overall site, many reactor facilities have been remediated, or placed in some level of storage, or will be remediated. Dr. Stricker points out that the former NRTS site, now called the Idaho National Laboratory site, has housed 52 different reactors.

As related in "Proving the Principle," there were serious last-minute attempts to revitalize the MTR with new projects and new money, but this wasn't enough to prevent its  shutdown; designation of the MTR as a "historical Signature Property as designated by DOE Headquarters Advisory Council on Historic Preservation" (as related in the disposal analysis) wasn't enough even to keep the building. We've at least put a marker for the MTR and all those who worked on, or at, the facility on the ANS Nuclear Cafe blog with this post, and noted its passing.