I'm taking some time out from the summit to write a few words for the ANS Nuclear Cafe. This is my first trip to India, and Mumbai has been an exciting and interesting city. The trip started out with some difficulties: suitcase malfunctions, flight delays and rerouting, and lost luggage. But I arrived in India early Wednesday morning ready to see more of and learn more about India and, in particular, its nuclear programs.

First, I had to buy some clothes, as I wasn't sure when, or if, my suitcase would ever catch up with me. It turns out it got here about 24 hours after I did, spending a day in Heathrow Airport, in England, before traveling on to catch up with me. I didn't get it in time for the conference start, however, so native dress was my uniform for the day. See the picture below with Don Hoffman, vice-president/president elect of the 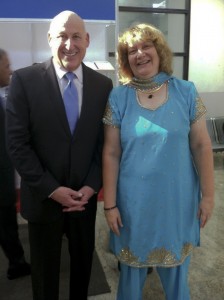 The morning session was a welcoming plenary, with speakers mostly from India telling us about India's energy needs, and the history of nuclear energy in India. Dr. Alok Mishra, secretary of the ANS India Section, opened the session followed by Shri SK Sharma, INS president, and then by Don Hoffman. I particularly noted Don's comments to the India Institute of Technology (IIT-Bombay) students in the room, i.e., we must all continue to learn. Learn from events like Fukushima, learn from each other's countries and cultures where we can do better and be more effective.

There is a traditional (and literal) lighting of the lamp ceremony. Red and gold flowers surround a brass lamp where each of several dignitaries take turns lighting the candles in the lamp. The lamp stays lighted, by tradition, for the conference. Of course, safety precautions meant that it didn't really stay lit, but it was a fun tradition to observe. 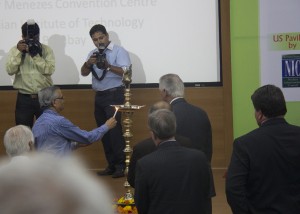 The next speakers-Prof. Khakhar, director of IIT-Bombay, and Dr. Kakodkar former AEC chairman-helped put the Indian nuclear industry in some perspective. India is focused on safety and education in its nuclear program. Regaining access to more information from the United States helps improve the safety of existing Indian nuclear power plants.

There were some really interesting and important discussions of why India has sought out nuclear energy production and why it must continue to use nuclear to generate electricity. Many in India have no electricity for 8-10 hours every day. This includes residences, businesses, and manufacturers. The sheer lack of reliable power takes an enormous toll on the population and the economy. India has few natural energy resources of its own. No coal, oil, or natural gas. Relying on other countries for basic energy needs leaves countries unacceptably vulnerable. India has uranium (and thorium) and can generate power without reliance on any other country.

Currently, India's per capita access to electricity is about one-third to one-half of other developed nations. The enormous need to increase access to reliable electricity makes nuclear an important part of the path forward. This huge energy need means that India is pursuing all sources-wind, solar, and nuclear. The sheer density of nuclear energy becomes an important part of bringing energy to the population. India does not have large amounts of land that can be dedicated to energy production, making both wind and solar more difficult to install.

In order to bring other countries into a cooperation, however, India must keep clear and bright lines separating military nuclear programs from their commercial nuclear programs.

Despite the fact that uranium production in India is expensive compared with the rest of the world, its internally developed PHWR produces electricity at competitive costs.

There's more, but I need to get back to what's happening. I'll post again later! 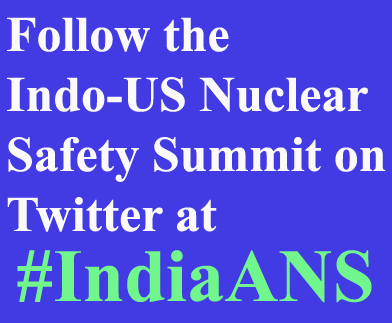 Margaret Harding has almost 30 years of experience in the nuclear industry in technical design, licensing, and quality issues.  She worked for GE-Hitachi for 27 years with positions of increasing responsibility, leading to vice president of Engineering Quality. Two years ago, she left GE-Hitachi to start her own consulting business to help companies with business ventures in the nuclear industry. She is a guest contributor to the ANS Nuclear Cafe.

On Saturday, January 25, 2014, members of the American Nuclear Society's Chicago Section organized and participated in "Atomic Fission Fun," an event for Girl Scouts to learn about nuclear...

On January 31, 2013, about 30 lucky members of the Virginia section of the American Nuclear Society heard a series of informative tales from one of the many innovative pioneers of the First...