The August 2012 issue of Nuclear News is available electronically and in hard copy for American Nuclear Society members. 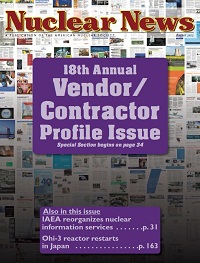 The issue contains a 128-page special section containing advertisements and "advertorial" information about products and services provided by companies serving the nuclear industry.