For your reference: Nuclear News magazine 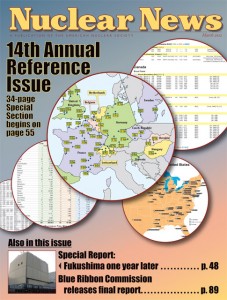 There is also a special section titled Fukushima one year later that contains the following articles:

And, in case you missed it, the February and past issues of Nuclear News are available here. For example, the February issue contains the following feature stories:

Welcome to the New Year!  Even though I am on the road, there is just so much happening lately in nuclear I could not pass up the opportunity to talk about it! This episode of RadioNuclear, we take a look at recent and exciting legislation and policy for advanced nuclear. This includes the passages of the NEIMA and NEICA bills and what the Idaho National Laboratory may look like in the coming years. We also discuss the NRC's recent decision on post Fukushima regulation. Lastly, we look on how you can adopt a dog from the Chernobyl exclusion zone. No, I am not making that up!