NRC/Fukushima hearing in US Senate on Thursday

A hearing titled "Lessons from Fukushima One Year Later: NRC's Implementation of Recommendations for Enhancing Nuclear Reactor Safety in the 21st Century" will be held in the U.S. Senate on Thursday, March 15, at 10:00 AM EDT. The hearing will be a joint session of the Senate's Committee on Environment and Public Works and the Subcommittee on Clean Air and Nuclear Safety. 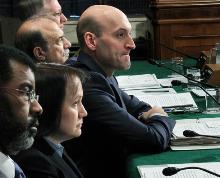 Featured testimony will come from NRC chairman Gregory Jaczko and fellow NRC commissioners Kristine Svinicki, George Apostolakis, William Magwood, and William Ostendorff.  The hearing will be webcast at the website for the U.S. Senate Committee on Environment and Public Works.

In the aftermath of the Great East Japan earthquake and tsunami, the NRC formed a task force to reevaluate the safety and security of the 104 nuclear power plants in the United States, and develop a series of recommendations based on the lessons learned from Japan. The March 15 hearing will concern the orders, rules, and other actions from the NRC intended to enhance reactor safety and protect public health based on those task force recommendations.

The hearing is a follow-up to the Senate committee's hearing 0n December 15, 2011, titled "Review of the Nuclear Regulatory Commission's Near-Term Task Force Recommendations for Enhancing Reactor Safety in the 21st Century,: which is archived here. The prepared opening statement of Chairman Barbara Boxer (D., Calif.) for that hearing is here. The prepared opening statement of Ranking Minority Member James Inhofe (R., Okla.) is here.

Jaczko and the other commissioners have not always been in agreement on regulatory decisions facing the NRC, notably including a recent 4-1 vote to grant a license to build and operate two reactors at the Vogtle nuclear facility in Georgia.