Living next door to the most powerful computers in the world offers the Tennessee Valley Authority (TVA) a unique opportunity to get answers to important questions about its operating nuclear reactors. The utility has multiple reactors at three sites-Browns Ferry (three boiling water reactors), Sequoyah (two pressurized water reactors), and Watts Bar (one PWR). And TVA is having its own mini nuclear renaissance: It completed a reactor at Browns Ferry in 2007, it will complete a reactor at Watts Bar next year, and by the end of this decade, it is likely to be nearing completion of a reactor at Bellefonte.

So where does TVA go when it wants to look deep inside its reactors to help optimize their performance? After all, with billions of dollars invested in these facilities, the utility's managers want to insure that they get every ounce of performance out of them while securing safe operation in all respects.

The answer is that TVA turns to the Department of Energy-funded Consortium for Advanced Simulation of Light Water Reactors (CASL) operating at Oak Ridge National Laboratory (ORNL).

Rose Montgomery, a project manager and a TVA employee on loan to CASL, says that the primary value in the near term is validation of fuel cycle design and reactor operations computer codes.

This work is consistent, she notes, with the DOE's objective for CASL, which is to boost reactor reliability and uptime.

The CASL project is a mix of scientific research and applied research and development, but that brief summary doesn't do justice to the objectives the organization has set for itself.

"We are looking for giant strides in computer simulation of phenomena inside a reactor in the areas of thermal hydraulics, fuel rod mechanics, and numerous safety boundary conditions," she said. 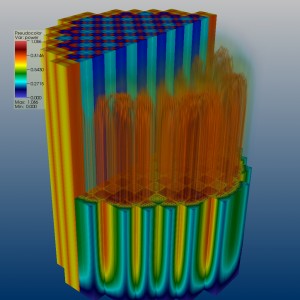 CASL's vision is to achieve results. Three broad areas of expected outcomes are defined in its vision statements:

TVA's work with CASL is based on the assumption that there is industry wide applicability to the modeling and simulation work. CASL is moving beyond a focus on simulating normal steady state reactor conditions.

Its scientists and engineers want to provide insights and enhancements to fuel system design, reactor life extension, accident simulations, and used fuel storage. These are all key issues for a multi-reactor operator such as TVA.

CASL gets data about what's going on inside TVA's reactors by collecting operational information and using it in advanced modeling and simulation software that runs on some of the world's most powerful supercomputers located at ORNL.

Montgomery lists work that has applicability to the U.S. nuclear industry including optimizing fuel efficiency and improving the understanding of fuel performance issues. The six technical focus areas of CASL are:

TVA believes that the CASL program has wide industry applicability in terms of modeling and simulation. CASL is currently focused on the reactor system and nuclear fuel in PWRs. If given more time, however, CASL proposes to move on to simulations of BWRs, small modular reactors, and balance-of-plant systems.

CASL does not expect to license the codes they provide; this will be left up to the utilities and fuel vendors to complete. However, CASL is working to ensure that the codes will be available to industry and will be in a position to be licensed in the future. The project is currently interfacing with the Nuclear Regulatory Commission's Office of Nuclear Regulatory Research, with regular updates on the development progress.

In the short term, TVA expects to see benefits in some aspects of management of core cycle designs and a reduction in some costs related to operating issues such as CRUD deposition. (CRUD refers to tiny, solid, corrosion products that travel into the reactor core, become highly radioactive, and then flow out of the reactor into other systems in the plant.) In the longer term, CASL's work is expected to result in findings that will be applied to TVA reactors so that they can produce more power.

For more information on CASL, contact them at http://www.casl.gov