GE Hitachi Nuclear Energy has proposed to the U.K. government to build an advanced nuclear reactor that would consume the country's stockpile of surplus plutonium.

The technology is called PRISM, which stands for Power Reactor Innovative Small Module. If accepted, it would be very different than the other proposals to process plutonium, including those that would turn it into mixed oxide fuel (MOX).

According to GE Hitachi, the PRISM reactor disposes of a great majority of the plutonium as opposed to simply reusing it over again. This process takes it out of circulation forever. 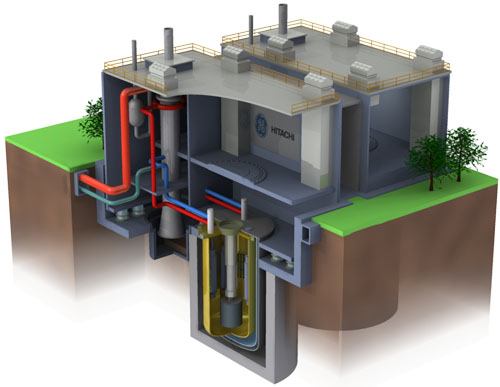 Fuel for the PRISM reactor is created by converting the plutonium from powder form mixing it with uranium and zirconium to make a metal fuel. The resulting spent fuel contains plutonium in a form that cannot be used to make nuclear weapons.

Eric Loewen, chief engineer on the project (and president of the American Nuclear Society), said that the waste form is much the same as what comes out of light water reactors. Once the plutonium has been in the PRISM reactor for five years, it is mixed with other nuclear materials that make it nearly impossible to retrieve the metal for the purpose of making a weapon.

The PRISM reactor is a so-called "fast reactor" because it uses liquid metal sodium rather than water to cool the system. The sodium allows the neutrons to maintain higher energies and to cause fission in elements such as plutonium more efficiently than light water reactors.  (large image)

Based on the design of the Integral Fast Reactor (EBR-II) developed at the Argonne National Laboratory in Idaho, the PRISM reactor uses passive safety features that cause it to shut down automatically. In the event of a complete loss of electrical power, it simply stops working and passively dissipates residual heat. EBR-II was canceled in 1994, but not before a safety analysis showed that there were no technical barriers to getting a license and safely operating one.

The Argonne National Laboratory as it appeared in the 1990s when work was stopped on EBR-II.

According to a fact sheet from GE Hitachi, the PRISM reactor's relatively small size and simpler design would allow it to be built in modules and transported for assembly on site. Another benefit of the reactor is that while it is disposing of weapons materials, it is also generating electricity.

According to the proposal, there would be two PRISM reactors each generating 300 MW of electrical power. It would take about five years to burn through the 112 tonnes of material. The reactors could be used for up to 60 years.

The UK government had considered building a MOX plant at the Sellafield site where the plutonium is stored, but it canceled those plans as the Japanese government stopped orders for MOX following the Fukushima earthquake.

GE Hitachi contends that the PRISM reactor will cost less to build than a new MOX plant. It is costing the U.K. government £2 billion (about $3.1 billion) a year to maintain the plutonium inventory.

In the United States, the government is building a MOX plan that will process 34 short tons of plutonium, turning it into the equivalent of 1,700 PWR MOX fuel assemblies for light water reactors at a cost of $4.5 billion.

If an assumption is made that the delivered cost of the PRISM reactor is $4,500/Kw, then 600 MW of power would cost $2.7 billion or about the cost of one year of storing the plutonium in its current form.

Additional costs would include a fuel fabrication facility, the fuel itself, and spent fuel disposal. Life-cycle costs would have to be taken into account to get a true comparison.

The U.K. government hasn't said what it thinks of the GE Hitachi proposal, but it has talked about what it needs to know to make a decision.

In addition to financial feasibility, U.K. energy minister Charles Hendry told parliament that the government needs to know the work can be done safely and securely. He said U.K.'s Department of Energy & Climate Change would examine the PRISM proposal. He also said that the government is considering converting 28 tonnes of foreign-owned plutonium at the Sellafield site into MOX. 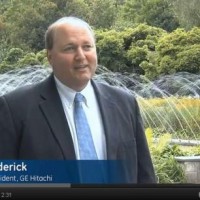 GE Hitachi vice president Danny Roderick told financial wire services that while the government is looking at the plutonium as a security risk, his firm sees it as an asset that can be burned to make electricity.

The plutonium was created as a result of nuclear spent fuel reprocessing, which took place at the Sellafield site starting in the 1950s.

In October 2010, GE Hitachi signed an agreement with the U.S. Department of Energy's Savannah River Site to investigate the feasibility of constructing a prototype of the PRISM reactor there.

Coincidentally, the proposal to use the technology from EBR-II comes almost 60 years to the week that electricity was first generated on the Idaho desert in its predecessor EPR-I.