Up, Up, and Away: Victor Hess and the Cosmic Ray

Victor Francis Hess was awarded a Nobel Prize in physics for discovering "cosmic rays." Hess did some of his research in a very bold manner-here's some of his story.

Ionizing radiation is very potent, as radiation goes, because it has sufficient energy to knock electrons off of atoms or molecules-thus producing positively-charged ions. Ions can also be negatively-charged, such as when a free electron is caught by an atom or molecule-and ions can even be formed by adding other ions.

This "ionizing radiation" was known and measurable in the early 1900s, but the results of some measurements were not as expected. The newly-invented instruments of the time-electrometers, which could detect the presence of energetic charged particles-had been used to detect many radiation sources at ground level. Naturally, moving away from these ground-based radiation sources should  have resulted in lower electrometer readings.

Instead, early experiments, such as Theodor Wulf's taking his new electrometer to the top of the Eiffel Tower, seemed to indicate that ionizing radiation in the atmosphere increased at levels above the (radioactive) ground. These results were definitely not well accepted by scientific authorities at the time.

Victor Hess was very interested in this puzzle. He improved the accuracy and endurance of Wulf's electrometer, then put this new equipment to good use by taking measurements of charged particles in the atmosphere-from the gondola of a balloon! These were no ordinary balloon excursions. Both during the day and night, in 1911 and 1912, Hess measured ionizing radiation at altitudes up to 3 miles high. A risky endeavor at the time.

Hess's work showed that, as one ascended above the surface of the earth, the level of radiation at first decreased just as expected. Then, radiation levels began to increase with increasing altitude-reaching several times that of ground level at Hess's maximum attainable altitude of about 3 miles. 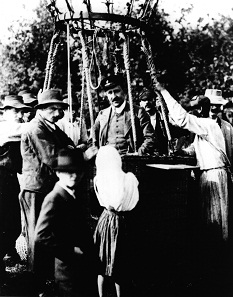 Hess and his balloon

Hess even made an ascent during a solar eclipse, to rule out the sun as the source of the radiation. With the moon blocking most of the sun's radiation, levels of radiation in the atmosphere still increased at higher altitudes. Hess could only conclude that the atmospheric radiation came from outer space, and eventually came to be known as cosmic rays.

The earth's atmosphere does a good job of protecting us on the surface from cosmic rays-and this is fortunate, since some cosmic rays have energies much greater than can even be created with the largest particle accelerators. Cosmic rays interact in the atmosphere to create secondary radiation, including x-rays, muons, protons, alpha particles, pions, electrons, and neutrons.

In spite of the atmosphere's shielding, cosmic rays are still a substantial portion of the natural background radiation that the earth experiences every day.

The effects of cosmic rays explain why airline flight crew workers receive more radiation dose on average than any other worker. Fortunately, for eons our distant ancestors flourished in our (mildly) radioactive environment on earth-equipped  with the ability to successfully repair the occasional damage from ionizing radiation. To estimate your own overall radiation dose rate, click the interactive ANS Radiation Dose chart.

Paul Bowersox is a fan of ballooning and a contributor to ANS Nuclear Cafe.
Tags:
irradiationnuclear pioneersphysicsradiation
Share:
LinkedInTwitterFacebookEmail