Lord Rutherford and the Atomic Pudding

Today is the 100th anniversary of the publishing of Ernest Rutherford's revolutionary article, "The Scattering of α and β Particles by Matter and the Structure of the Atom," which appeared in Philosophical Magazine (Series 6 21: 669-688). In the article, Rutherford explained his astonishing and profound discovery that atoms consist of a small and dense nucleus surrounded by electrons.

Peter Caracappa, in his February ANS Nuclear Cafe blog article, The March of Time, Nuclear Wise, marveled at how only 100 years ago, such technologies as airplanes, automobiles, and electric lights already existed, yet there was no such concept as the atomic nucleus. Caracappa commented on how relatively young the fundamental knowledge of nuclear science really is, and how Rutherford's visionary paper postulated that the atomic nucleus was a centennial worth celebrating.

Let's take a quick look at how Rutherford proved that atoms consist of a tiny, super-dense nucleus-and how he put to rest the then-popular "plum pudding" model of the atom.

J.J. Thomson in 1897 discovered that all atoms contain far smaller, fundamental building block particles eventually known as electrons. To account for the atom's overall neutral charge, in Thomson's model of the atom (published in March 1904 in Philosophical Magazine), the atom's electrons were embedded in a uniform "soup" of opposite charges throughout the volume of the atom-like negatively-charged plums in a positively-charged plum pudding. 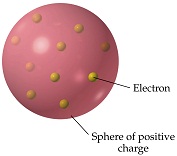 Hans Geiger and Ernest Marsden, under the direction of Rutherford in 1909, directed a beam of alpha particles (helium nuclei) onto sheets of gold foil only a few atoms thick. The researchers expected that these alpha particles would pass through the dilute soup of the plum pudding gold atoms, with at most some minor deflections, perhaps of a few degrees. This was expected because the positive charge of the gold atom was supposedly diluted, spreading throughout the entire volume of the atom.

Instead, the researchers found alarming results. Some alpha particles were deflected at very large angles-including almost directly backward-while most 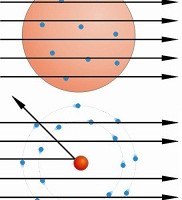 alpha particles passed straight through. This kind of result was not expected from any theory of matter at the time. Rutherford was flabbergasted:

"It was quite the most incredible event that has ever happened to me in my life. It was almost as incredible as if you fired a 15-in. shell at a piece of tissue paper and it came back and hit you. On consideration, I realized that this scattering backward must be the result of a single collision, and when I made calculations I saw that it was impossible to get anything of that order of magnitude unless you took a system in which the greater part of the mass of the atom was concentrated in a minute nucleus. It was then that I had the idea of an atom with a minute massive center, carrying a charge."

Rutherford's nuclear model of the atom

Rutherford interpreted the gold foil experiment results in his May 1911 Philosophical Magazine article-and the plum pudding model of the atom was destined for the dustbin. No soup of positive charge across a whole atom could carry the concentrated charge needed to deflect alpha particles so strongly. Instead, Rutherford reasoned that much of the atom's charge and most of its mass were concentrated into a very small central region-later to be called the nucleus-surrounded by a cloud of electrons. 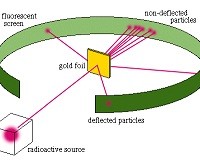 Rutherford calculated that the central charge at the center of the gold atoms must be, at most, perhaps 1/3000 the diameter of the entire atom-not at all resembling lumps of electrons spread among a positively-charged atomic soup. When a positive alpha particle approached close enough to a nucleus, it was repelled strongly and rebounded at a high angle-and since most of the atom was empty space, most of the alpha particles simply passed through undisturbed.

Rutherford is now widely known as the "father of nuclear physics" for discovering the atomic nucleus, for being the first to split the atom, and for many other nuclear discoveries. On this centennial of his replacing the plum pudding atomic model with a modern nuclear model, let us feast on a delicious slice of plum pudding, which serves as dessert much better than it does as atomic structure.

Paul Bowersox prefers cake, and occasionally pie, and is a contributor to the ANS Nuclear Cafe.

In partnership with Discovery Education, ANS launched its third virtual field trip on May 6. “Nuclear Frontiers: Powering Possibility” takes students on a journey to learn how Earth-based...