It is ironic that cooperation among North American pro-nuclear energy bloggers would mark the first year of their operation in the middle of the Japanese crisis at Fukushima.  Nuclear energy bloggers talk to each other all the time.  It is one of the most intense online dialogs on the subject available in the English language.  Fukushima has pushed the envelope of subject matter in the blogsphere as well as responses to the mainstream news media.

In 2008 there were perhaps half a dozen pro-nuclear blogs active in North America.  Today, three years later, there are at least three times that number.   Most of them participate in the weekly carnival.  The carnival features blog posts from the leading North American nuclear bloggers and is a roundup of featured content from them.

This week there is continuing news from Fukushima, but there are also a diverse set of posts on nuclear energy topics. If you want to hear the voice of the nuclear renaissance, the Carnival of Nuclear Energy Blogs is where to find it. Contrary to what the anti-nuclear crowd would like you to believe, the wheels have not come off the renaissance.

Past editions of the carnival have been hosted at NEI Nuclear Notes, ANS Nuclear Cafe, NuclearGreen, CoolHandNuke, and, Idaho Samizdat, as well as several other popular nuclear energy blogs.

If you have a pro-nuclear energy blog, and would like to host an edition of the carnival, please contact Brian Wang at Next Big Future to get on the rotation. This is a great collaborative effort that deserves your support. Please post a Tweet, a Facebook entry, or a link on your Web site or blog to support the carnival.

New York Times buries the hatchet at the NRC

It isn't often that the independent-minded nuclear bloggers in the U.S. line up to aim their rhetorical fire power at the same article in the mainstream media.  It takes a lot to provoke a focus on a common target.  However, when they do, it is time to pay attention. This was the case this week as three of the nation's leading  nuclear blogs responded to an unbalanced article published in the New York Times.

At Rod Adams Atomic Insights, he notes that it is ironic the New York Times portrays NRC Chairman Gregory Jaczko as something of a white knight fixing a broken agency.  Jaczko, who once worked for the arch-druid of the anti-nuclear movement, Rep. Edward Markey (D-Mass.), now finds himself explaining his agency's actions to his former colleagues.

At Meredith Angwin's Yes Vermont Yankee, she walks through NYT reporter Tom Zeller's one-sided reporting point by point.  It's more than just a case of "he said / she said." It is holding the newspaper accountable for its hatchet job on the NRC.  Angwin writes . . .

"The article is one-sided and mostly quotes people who are associated with the Union of Concerned Scientist. It is really no surprise that Tom Zeller has left the New York Times and joined the Huffington Post, where this type of one-sided journalism will get more scope."

At Dan Yurman's Idaho Samizdat, he writes the New York Times deserves criticism for its handling of the charge of conflict of interest put against NRC Commissioner William Magwood.

There is no indication the newspaper spoke with Magwood about the claim made by Danielle Brian of the Project on Government Oversight (POGO). Ms. Brian told the newspaper her group feels Magwood's industry experience would prevent him from acting independently in matters that came before the NRC.

Yurman writes, "The newspaper's failure to give Magwood an opportunity to respond to the charge from POGO is an unfortunate departure from the standards of ethics and fairness the newspaper claims to uphold."

George Monbiot is another environmentalist for nuclear energy

In another example of independent nuclear bloggers pointing to the same interesting content on the Internet, both Atomic Insights and Nuclear Green ask readers to pay attention to the writings of George Monbiot at the Guardian. (right)

Rod Adams writes at Atomic Insights that George Monbiot has recently published some thought provoking articles about the dilemmas facing people who are focused on protecting the natural environment.

Charles Barton writes at Nuclear Green that Monbiot worries that environmentalism is at war with itself conflicted over technologies and beliefs without having rigorous examined the basis for its commitments to either.

Here are some examples cited by Adams and Barton . . .

You think you're discussing technologies, you quickly discover that you're discussing belief systems. The battle among environmentalists over how or whether our future energy is supplied is a cipher for something much bigger: who we are, who we want to be, how we want society to evolve.

Beside these concerns, technical matters - parts per million, costs per megawatt hour, cancers per sievert - carry little weight. We choose our technology - or absence of technology - according to a set of deep beliefs; beliefs which in some cases remain unexamined.

What the nuclear question does is to concentrate the mind about the electricity question. Decarbonising the economy involves an increase in infrastructure. Infrastructure is ugly, destructive and controlled by remote governments and corporations.

These questions are so divisive because the same worldview tells us that we must reduce emissions, defend our landscapes and resist both the state and big business. The four objectives are at odds.

Even with a huge glut of gas in the country, new nuclear is still found to be economical. FPL's latest filings on the need for two more nuclear units at its Turkey Point station will provide big savings that include "fuel cost savings for FPL's customers of approximately $1.07 billion (nominal) in the first full year of operation" and a reduction in "C02 emissions by an estimated 287 million tons over the life of the project."

Our energy policy, or lack thereof, is a result of our fractured education about energy. Rethinking how we communicate with the public, via education and popular culture, are just as important as research and development and licensing.

Marcus comments on the Atomic Energy Society of Japan recommendation for the nuclear regulatory functions in Japan to be consolidated into one independent agency.  Having served as the US NRC liaison to the regulatory arm of MITI in 1992, I can attest to the situation they describe and I endorse their recommendation.

Translating the radiation numbers we see in the newspapers into effects on our health is difficult and laced with many if's, and's, and but's. Cheryl Rofer digs through BEIR VII, the report that is the basis for American regulatory judgements on radiation risk, to find some numbers. This post is part of a continuing series in trying to make those radiation numbers more understandable.

Three major utilities confirm plans are on track for construction. Every time an anti-nuclear group talks about the Japanese crisis at Fukushima, in the next breath they proclaim the death of the nuclear renaissance in the U.S. This claim is wrong as to the facts and wrong-headed with regard to the nation's need for carbon emission free energy.

It seems almost like Fukushima has created a case of temporary amnesia about the value of nuclear energy to meet the twin challenges of global warming and energy security.  Did we all get hit with a falling coconut?

In recent weeks several nuclear utilities have stepped up to remind their investors and the public about the realities of the nation's energy mix and why nuclear reactors have a place in it.

Salt in the wound at Fukushima

This writer wonders about the early statements by GE, and the NRC, that there might be as much as 50 tons of salt accumulated inside the pressure vessel at No. 1 plant. This seems to have been either forgotten or omitted in much of the present commentary.

Given that most scenarios for long-term SBO include failure of the core support and dropping of the core to the bottom of the vessel, it's certainly plausible that this has happened. Perhaps, though, we should begin to wonder if this melted fuel material is encased in salt.. or sitting in a large mass of salt at the bottom of the pressure vessel. Perhaps, in fact, early core melt did actually cause some failures at the lower vessel head which was then plugged by the salt deposits. All of this is highly speculative.

This is a call to action to the pro nuclear advocates. For all the energy that they put out for the cause of promoting nuclear energy, much of that energy would have a greater impact if it were directed outside the circle of the already converted. Promoting a carbon free technology as well as opposing the backlash of irrational fears over the Fukushima event is essential in order to enable nuclear energy to become the leading power source for our future needs.

The Blue Ribbon Commission on Nuclear Waste was appointed during the most tumultuous politically charged periods in American history. The pressure from various senators and members of the house are potentially a disruptive force to enabling objective and forward thinking recommendations. The future of our ecosystem could depend a lot on the outcome of the BRC on Nuclear Waste reports.

Recycling should be Option for Managing America's Used Fuel

The Blue Ribbon Commission on America's Nuclear Future holds today its final public meeting before issuing draft recommendations for managing used nuclear fuel. One of their major considerations in shaping the policy of our energy future will be to decide whether to strategically view the 60,000 metric tons (plus 2,000 metric tons annually) of used U.S. nuclear fuel as waste, or as a significant recyclable energy resource, and whether that resource is commercially viable. 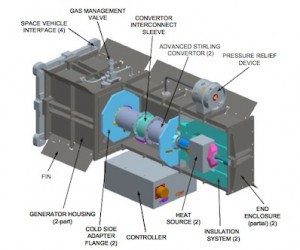 Two of the robotic missions NASA selected for further study last week would bepowered by experimental nuclear generators. NASA picked robotic missions to Mars, a comet and Saturn's moon Titan as finalists last week for a launch opportunity in 2016, and two of the probes would employ a cutting edge nuclear power source never tested in space.

Probes to Titan and comet Wirtanen, a small object composed of a mix of rock and ice, would be powered by Advanced Stirling Radioisotope Generators on their journeys into the outer solar system. The nuclear power units, called ASRGs, use less plutonium than existing generators.

Unlike Radioisotope Thermoelectric Generators, which have powered satellites and probes for nearly 50 years, the ASRG has the added complexity of moving parts.

But each ASRG creates between 130 and 140 watts of electricity with 1 kilogram, or about 2.2 pounds, of plutonium-238. More than four times more plutonium would be required to generate the same power in an existing RTG

The deadly side of energy technologies

Time Magazine blog refers to my death per twh article, and California Occupational health has tracked at least four deaths related to solar installation. Meanwhile coal easily laps the field in evil and danger. 14 killed at Mexican coal mine and the Coal industry pushes bills for less safety regulation and to delay pollution controls that would save tens of thousands of Americans

Many nuclear reactors can be situated on the same piece of land. Most of the land can be used for other purposes. There is no reason it cannot be used for many other purposes other than housing people. If nuclear power replaced coal then the large land areas of coal plants can be repurposed for nuclear power.

The second unit at China's Ling Ao II nuclear power plant has been connected to the grid. The 1080 MWe Chinese-designed CPR-1000 pressurised water reactor (PWR) was synchronised with the grid on 3 May. It is now undergoing final tests prior to commercial operation which is scheduled to begin on 15 June, exactly five years after construction formally began. The reactor is the second CPR-1000 to start up, following its sister plant Ling Ao II unit 1, which entered commercial operation in September 2010. 17 CPR-1000s already under construction. Work is planned to begin on at least five more during 2011.