IndyCar is the premier open wheel racing series in the United States. IndyCar features street races, road races, and oval track races around the country, including the world famous Indianapolis 500. "Indy cars" are technologically quite sophisticated, as they are built only for racing. One particular Indy car this season will be sporting a clean, new nuclear-themed look, courtesy of the Entergy, the second largest owner and operator of nuclear power plants in the United States. 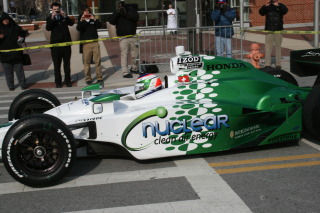 The race car,  no. 78, is driven by one of the most promising young drivers in open-wheel racing, 22-year-old Simona de Silvestro, winner of the 2010 Indy 500 Rookie of the Year Award.

De Silvestro dominated the developmental 2009 Atlantic Championship Series. She was the first woman in Atlantic Championship history to earn the most wins and pole positions, and to lead the most laps in a single season. In 2010, de Silvestro moved up to the top tier IndyCar Series. She led the field for several laps in her very first IndyCar race in Sao Paulo, Brazil, and finished in the top 10 in races in Toronto and Ohio. Entergy sponsored her in the 2010 Indianapolis 500, where she carried the message of emission-free nuclear energy on her racing uniform and racing car to an impressive 14th place rookie finish.

On January 24, 2011, Entergy Corporation made the official announcement of a new three-year primary sponsorship for de Silvestro and her team, HVM Racing. This rare long-term sponsorship, and the all new look of car no. 78, are the latest in Entergy's Nuclear Clean Air Energy national education campaign. This campaign has reached millions of fans at racetracks, college campuses, and community events with its message of promoting emission-free nuclear power. These important exhibits and events use the eye-catching car to open up essential one-on-one discussions between the public and nuclear engineers, and to aid in recruiting prospective employees for the nuclear sector.

At the official announcement of Entergy's sponsorship, an elated de Silvestro said, "It's pretty special to have a sponsor like Entergy and to have such an important campaign as the Nuclear Clean Air Energy initiative. It's a great message." John Herron, Entergy chief nuclear officer, added at the sponsorship announcement, "Education is key to smarter energy consumers, and doing so with a young role model like Simona couldn't be better." De Silvestro is widely known in the racing circuit as affable, very approachable, genuinely pro-nuclear, and a fan favorite with a huge following.

Simona de Silvestro gets her memory tested when she is asked to trace the Barber Motorsports course while blindfolded:

The story of nuclear promotion in open wheel racing spans nearly two decades. Denis Beller, research professor of nuclear engineering at the University of Nevada in Las Vegas (UNLV) and an American Nuclear Society Landis Public Communication & Education Award winner, was instrumental in using Indy cars to promote nuclear technology: "We had this wonderful source of electricity, medical breakthroughs, industrial applications... [in 1994] I was an IndyCar fan who had observed racing being used to successfully promote many organizations and causes, and I thought 'Why not nuclear?'" 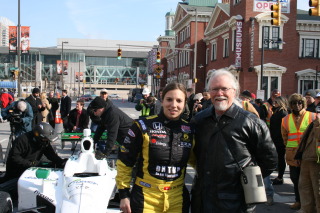 "I called Carl Haas at Newman-Haas Racing and explained my idea [in 1994, eight years before being introduced to Haas's partner Paul Newman]," said Beller, "and he suggested that I call Dick Simon, co-owner of Dick Simon Racing. I also called Sharon Kerrick at ANS, and she got it instantly." With approval from the ANS board of directors, Beller and Dick Simon Racing decided to put nuclear decals on the Simon team's show car for the ANS Winter Meeting. Thus was born the ANS IndyCar Outreach Program.

"My wife and I towed the car [and showed it] all over the country during 1995," said Beller. Among these very successful early exhibits were showings at the University of Wisconsin-Madison Engineering Expo, the Mall of America in Minnesota, Northern States Power headquarters in Minnesota, Milwaukee Machine Tool Expo, Purdue University in Indiana, the Toronto Grand Prix, and, of course, the Indy 500.

Complementary exhibits by ANS local and student sections at many events promoted the benefits of nuclear energy to the public, policymakers, some celebrities, and often local television crews.

In 2002, Beller was introduced to actor and racing enthusiast Paul Newman. Beller hosted visits by Newman to the Department of Energy's proposed Yucca Mountain repository in Nevada and to a nuclear waste recycling research project at UNLV. During the visits, nuclear issues were discussed. Newman, who eventually became a strong proponent of nuclear energy, co-founded Newman Wachs Racing (NWR) in 2006 with fellow racing enthusiast Eddie Wachs.

Several companies formed by Wachs are involved in nuclear design, modification, repair, maintainance, and decommissioning, and Beller wanted to meet Wachs and tour the companies. "We met on a Monday, and after quite a bit of discussion, he invited me to dinner," said Beller. "We came up with the idea of the philanthropic use of their cars to promote nuclear power and ANS. Sharon Kerrick quickly got permission from ANS to put its decals on the race cars. By Thursday, NWR's marketing exec was flying to a race in Mexico with ANS's decals in her bags." At the race that weekend in 2006 in Monterrey, Mexico, the ANS logo appeared prominently on the air for several minutes via the in-car camera.

With the success of the Monterrey race, nuclear decals on NWR cars eventually expanded to a full 'Go Nuclear!' livery. The new look on exhibit helped with setting a student recruitment record into the nuclear program at Purdue University in 2006, and in 2007 local and student ANS sections set up very successful nuclear communications exhibits at races in San Jose, Denver, Las Vegas, and Road America [Wisconsin]. Of course, the car's message was unmistakable on the racetrack.

After two years of nuclear logos and livery on NWR cars, by 2008 the continuous efforts of Beller and other key ANS members had attracted the attention of Entergy, the Nuclear Energy Institute, and the newly-formed Nuclear Clean Air Energy campaign. That year, then-19-year-old de Silvestro drove Newman and his partner Wachs to their first Atlantic Championship victory in the 2008 Nuclear Clean Air Energy car.

"My wife Judy deserves much of the credit for this whole thing," said Beller. "She traveled with me all over the country towing the Indy show car, helped me unload the car from trailers and trucks and maneuver it into some very tight spots and move it up and down ramps-it had no engine or brakes and was very valuable-and she set up and ran exhibits sometimes 12 or more hours a day, stood by me at professional meetings, worked with ANS students, took thousands of photographs, convinced nuclear industry leaders that it would work, and so much more."

There was a lot of support from many prominent people in ANS, "including then-President Alan Waltar of Pacific Northwest National Laboratory, Don Hoffman at Excel Services, Sharon Kerrick at ANS," said Beller. "I thank every ANS member who has helped with exhibits or who has otherwise supported my many public communication efforts."

De Silvestro with the last word and hopefully first place

When de Silvestro later moved to HVM Racing, Entergy's interest in her ability to promote nuclear energy followed, with a sponsorship at the 2010 Indy 500, and now this year's multi-year racing sponsorship. The first and lead spokesperson for Nuclear Clean Air Energy, de Silvestro perhaps summed it up best before the 2010 Indy 500 race: "Clean energy generation is a key issue globally, and I'm glad to be representing an industry that is a viable, green option."

Look for the talented young driver in a new, clean green-and-white nuclear-themed car beneath the checkered flag this Indy racing season-along with a message of support for clean nuclear energy.

Paul Bowersox is a new open-wheel auto racing enthusiast and freelance writer who lives near Mid-Ohio Speedway and holds a master's degree in science policy.

He is a guest contributor to the ANS Nuclear Cafe.