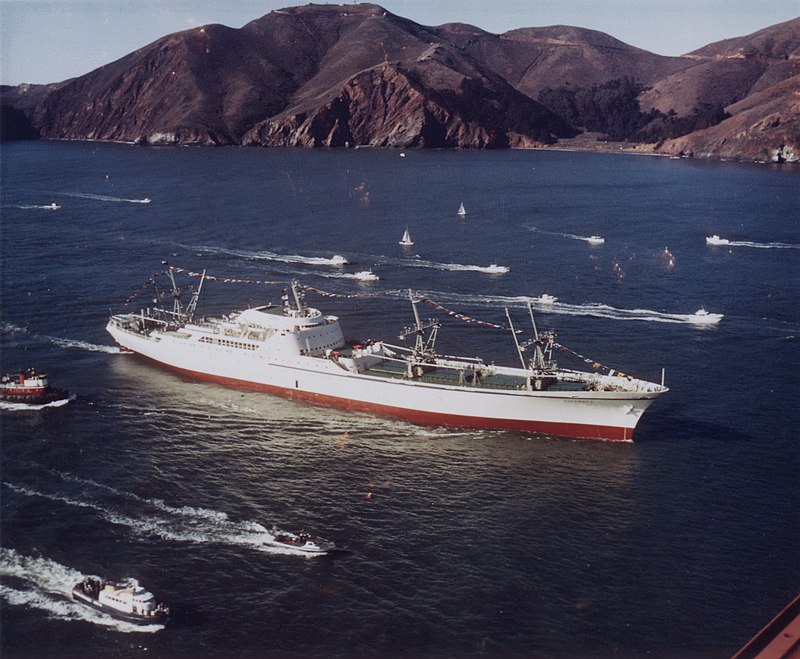 The Maritime Administration (MARAD), the branch of the DOT that operated the Savannah, continues to hold a license issued by the Nuclear Regulatory Commission to possess and dismantle a nonoperational nuclear reactor aboard the vessel. Decommissioning is part of the termination process of MARAD’s license. The draft PA among MARAD, the NRC, the Advisory Council on Historic Preservation, and the Maryland State Historic Preservation Office, outlines MARAD’s proposed plan to preserve as much of the ship’s historic value as possible during the decommissioning process.

On March 23, 1962, the NS Savannah became the first nuclear merchant ship at sea and is one of just four nuclear-powered cargo ships ever built. The vessel is equipped with a two-loop, 80 MWt pressurized water reactor.

During its time as an active merchant vessel, Savannah sailed more than 450,000 miles, serving as both a passenger cargo ship and a nuclear power educational ambassador. The ship was designated a National Historic Landmark in 1991 for “exhibiting exceptional value in illustrating nuclear, maritime, transportation, and political heritages of the United States.”

Not necessarily intended as a profitable enterprise, the NS Savannah was an experiment designed to show U.S. commitment to Atoms for Peace ideals. Savannah proved without question that a nuclear reactor could power a commercial ship. (Incredibly, the ship’s powerful nuclear-powered engine could allow it to sail around the globe 14 times at 20 knots without refueling.) Unfortunately, because its hybrid design as a passenger-cargo vessel was not economically viable and the ship did not lead to an effort to build a fleet of nuclear-powered vessels as originally hoped, the NS Savannah was removed from service.

After less than a decade of demonstrations and operations, the ship retired from active service in 1970 and defueled in 1971. It was then partially decommissioned and rendered permanently inoperable in 1976 and placed into a condition of mothballed protective storage (long-term protective storage). Since 2008, it has been moored at Pier 13 of the Canton Marine Terminal in Baltimore, Md.

The facility will remain under the regulatory regimen of the NRC as the Department of Transportation, through MARAD, implements decommissioning, which will involve dismantling, decontaminating, and disposing of the remaining systems, structures, and components that comprise the nuclear power plant. Once its license is terminated, MARAD will proceed with the disposition of Savannah.

Preserving history: To minimize harm to Savannah, given its landmark status, MARAD intends to adopt a set of guiding principles designed to minimally impact the ship’s surrounding spaces and historic fabric. These principles ensure that future preservation is the top priority. In that vein, MARAD also consulted with the American Nuclear Society, the Smithsonian Institution, the Steam Ship Historical Society of America, the N/S Savannah Association, and the National Museum of Nuclear Science and History and invited them to sign the PA as concurring parties.

MARAD will gauge public interest as part of the process to determine the future of the NS Savannah. The agency is considering several practical, cost-effective options for responsible disposition that can also provide environmental and economic benefits. One such option is donation, where an organization may choose to establish the Savannah as a museum, honoring the history of the ship and preserving it as a source of education and enjoyment for future generations. Another option is artificial reefing, which would strengthen marine habitats, enhance recreational fishing and diving, and reduce beach erosion. Finally, recycling the Savannah would allow for the collection of historic artifacts, repurposing of components, and reuse of valuable steel.

MARAD is inviting the public to comment on the draft PA. Comments can be sent to NS Savannah Senior Technical Advisor Erhard Koehler at Erhard.Koehler@dot.gov by January 31, 2023. To learn more about the NS Savannah, visit nssavannah.net.

Previous articles in this series were published on November 8 and November 14; this is the third and final installment of the series, which concludes just prior to the 60th anniversary of...