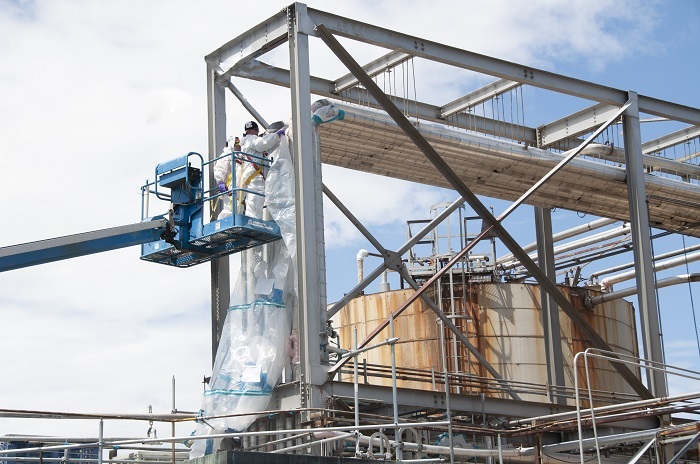 Workers at the PUREX plant install bags on a piping system to safely remove asbestos-containing material in the 203-A acid storage area. (Photo: DOE)

History: The PUREX facility was the final and most advanced chemical separations plant on the site. The PUREX process was key to Hanford’s plutonium production mission during the Cold War era. Nearly 70 percent of Hanford’s irradiated fuel rods were processed through PUREX, which was designed to recover plutonium from uranium fuel.

The 211-A area contains 20 chemical storage tanks, while eight more small tanks are located inside a pump house. Crews recently began draining chemical lines inside the pump house to prepare for eventual demolition. The lines were flushed during the 1990s, it needed to be confirmed that no process fluids remained. Workers also inspected and sampled inside tanks that had not been opened in decades, ensuring that the tanks can be safely demolished in the coming months.

Workers have also been making progress in cleaning up asbestos at the 203-A acid storage area. Constructed in 1954, the area consists of a pump house, a railroad loading dock, and a secondary containment area that housed nine aboveground tanks.

So far, crews have removed asbestos-contaminated insulation from nearly 1,600 of 1,900 feet of pipeline in the 203-A area.