December 8, 2022, 3:00PMNuclear News
A replica of the chianti bottle signed by many of those present on December 2, 1942, alongside the image of a document signed 20 years later by most of those present (Photo: ANL); a portion of a photo of CP-1 scientists taken on December 2, 1946 (Photo: ANL); January 1993 Nuclear News coverage of CP-1 50th anniversary commemorations during the 1992 ANS Winter Meeting.

Nuclear Newswire is back with the final #ThrowbackThursday post honoring the 80th anniversary of Chicago Pile-1 with offerings from past issues of Nuclear News. On November 17, we took a look at the lead-up to the first controlled nuclear chain reaction and on December 1, the events of December 2, 1942, the day a self-sustaining nuclear fission reaction was created and controlled inside a pile of graphite and uranium assembled on a squash court at the University of Chicago’s Stagg Field. 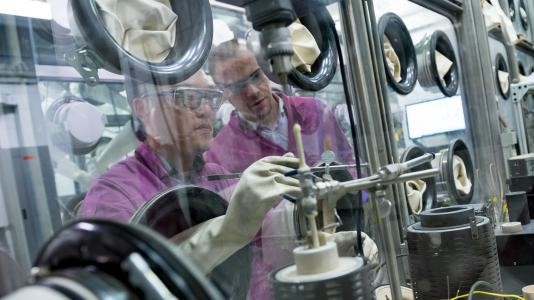