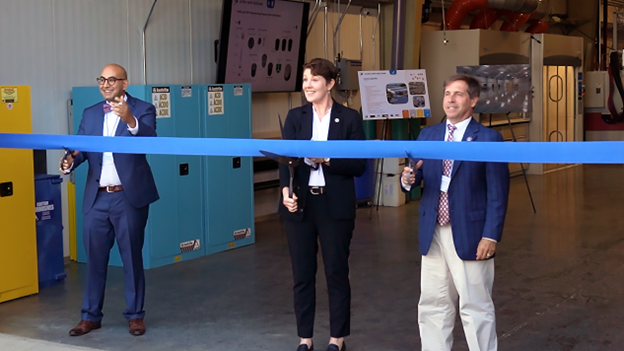 First-of-its-kind: Located in the East Tennessee Technology Park on the site of the Manhattan Project’s K-25 gaseous diffusion plant, the PFM facility hosts production-scale modules that will produce the first TRISO-coated fuel particles and pack those particles into 3D-printed silicon carbide shells to create fuel pellets ready for testing and qualification and for use in USNC’s 15-MWt high-temperature, gas-cooled, graphite-moderated microreactor, dubbed the Micro Modular Reactor (MMR).

The PFM facility will be capable of producing the company’s proprietary Fully Ceramic-Microencapsulated (FCM) fuel in multiple-kilogram quantities for testing and qualification and will also demonstrate modules the company plans to deploy in a future commercial fuel manufacturing factory. The 3D printing process used at the facility to produce the cylindrical silicon carbide shells was developed at Oak Ridge National Laboratory and licensed by USNC for use in the PFM production line.

“It’s great to get PFM up and running here in Oak Ridge, which has a uniquely qualified nuclear workforce and contractor community,” said Kurt Terrani, executive vice president of Ultra Safe Nuclear. “We selected this location specifically and the support we’ve gotten to build out this first-of-its-kind facility with this level of quality and care, on an aggressive schedule and on budget, is just phenomenal.”

They said it: At the ribbon cutting, Huff observed that “the group of people here is truly star-studded. I’m incredibly impressed at the folks who have joined us here, and I think it’s an indication of how clearly important this mission is going to be and what part this facility will play in the future of our nuclear energy as we transform this nation into a factory fighting the calamity of climate change.”

“I am very excited Ultra Safe Nuclear Corporation chose Oak Ridge to base their pilot fuel manufacturing operation,” said Fleischmann. “Advanced nuclear fuel technologies are essential to bringing next generation nuclear energy to the market and will allow us to meet our future clean energy needs.”

Kathryn McCarthy, associate laboratory director for fusion and fission energy and science at ORNL, said, “It’s great to see technology developed at ORNL being used by industry—tech transfer is an important role that the national labs play.”

Reactor plans: USNC plans to demonstrate its MMR at the University of Illinois–Urbana-Champaign as research and teaching reactor and at Chalk River Laboratories as a project of Global First Power—a joint venture formed by Canadian subsidiary USNC-Power and Ontario Power Generation.