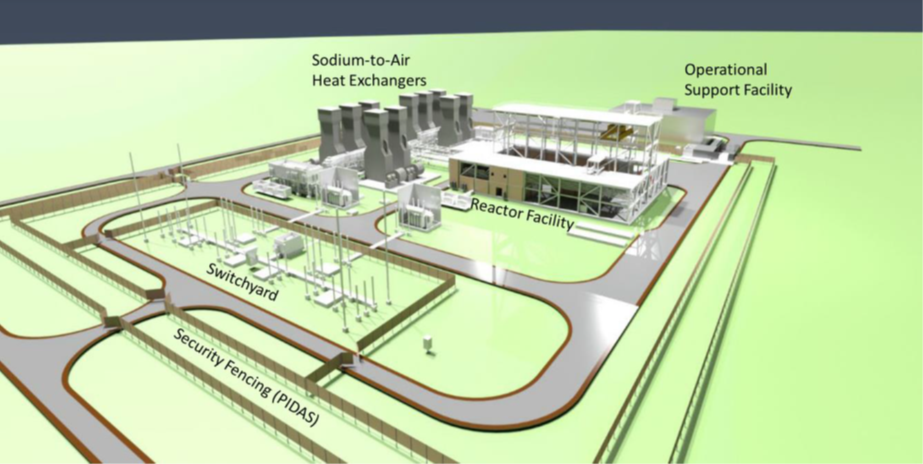 The 300-MWt pool-type sodium-cooled reactor using a uranium-plutonium-zirconium metal fuel could meet needs defined in the Nuclear Energy Innovation Capabilities Act (NEICA) if the project gets the go-ahead from the DOE and funding from congressional appropriators.

The impetus: The very high neutron flux generated by the VTR could reduce the irradiation time for testing materials by an order of magnitude compared to what is available today, accelerating the development of advanced nuclear fuels, materials, instrumentation, and sensors. The fast neutrons from the VTR would be similar to those expected in some advanced reactor designs.

“VTR will provide U.S. researchers from industry, academia, and our national laboratories with a critical tool for developing transformational technologies that will expand nuclear energy’s contribution to abundant, carbon-free energy,” said Kathryn Huff, the DOE’s assistant secretary for nuclear energy. “VTR’s contribution to the fight against climate change begins with our commitment to designing, constructing, and operating the VTR in a way that protects the environment and nearby communities.”

Final EIS scope: The Final VTR EIS analyzes the potential impacts of various VTR alternatives and options for reactor fuel production in accordance with the National Environmental Policy Act. Alternatives evaluated include construction and operation of the VTR at Idaho National Laboratory (the DOE’s preferred alternative) and at Oak Ridge National Laboratory. The project would include operating and performing experiments in the VTR, postirradiation examination of irradiated test specimens in hot cell facilities, and spent fuel conditioning and storage pending shipment for interim or permanent disposal. Under a no-action alternative, the DOE would not pursue construction and operation of a VTR.

The INL alternative would include the construction of the VTR adjacent to the Materials and Fuels Complex (MFC). Existing MFC facilities, some requiring new equipment, would be used for postirradiation examination and conditioning spent fuel. The ORNL alternative would include the construction of a VTR and a hot cell building at ORNL. The hot cell building would provide postirradiation examination and spent fuel conditioning capabilities.

Modified PRISM: GE Hitachi Nuclear Energy’s Power Reactor Innovative Small Module (PRISM) is the basis for the VTR design, and the test reactor would also incorporate technologies adapted from the Experimental Breeder Reactor-II and the Fast Flux Test Facility, according to the Final EIS. GEH’s PRISM design would require several changes, including eliminating electricity production and accommodating experimental locations within the core.

Fuel: The Final VTR EIS also evaluates options for preparing the feedstock for use in the reactor driver fuel and for fabricating the uranium-plutonium-zirconium fuel. Feedstock preparation would be performed using new capabilities installed in an existing building at INL or the Savannah River Site (SRS). Fuel fabrication would be performed using existing or newly installed equipment in existing buildings at INL or SRS. The conceptual design for the first VTR driver fuel core is an alloy of 70 percent uranium, 20 percent plutonium, and 10 percent zirconium (by weight), according to the Final EIS.

Both the INL and ORNL site options for the VTR itself would require construction of a concrete pad for dry storage of spent fuel pending shipment to an off-site storage or disposal facility. The DOE does not intend to separate, purify, or recover fissile material from VTR driver fuel.

Timeline: The DOE’s Office of Nuclear Energy established the VTR program in 2018 in response to NEICA, and in February 2019, the DOE announced its plans to build the VTR. The project is being led by INL in partnership with five national laboratories (Argonne, Los Alamos, Oak Ridge, Pacific Northwest, and Savannah River) and many industry and university partners. A draft VTR EIS was released in December 2020, confirming that INL was the DOE’s preferred site. At this writing, the DOE has not identified a preferred site for performing reactor fuel production activities.

ANS support: The United States has not had a fast reactor–based neutron source and testing capability for nearly three decades and risks losing ground in nuclear research and technology to countries such as Russia and China.

In July 2021, after the release of the fiscal year 2022 Energy and Water appropriations bill, ANS Executive Director/CEO Craig Piercy issued a statement in support of the VTR.

“We urge congressional leaders to take a closer look at the VTR as the process moves forward,” Piercy said. “Domestic fast-spectrum research irradiation capacity is critical to maintaining the U.S. nuclear infrastructure and enabling innovation and global leadership on safety and nonproliferation norms.”