JET started up in 1983 and operated for the first time with deuterium and tritium in 1991. A peak fusion power record that has yet to be topped was set in 1997, when 22.5 megajoules of fusion energy and 16 megawatts of fusion power were achieved in JET’s first dedicated D-T experiments. Subsequent experiments have focused on sustained fusion power rather than short bursts of peak power, and JET now holds a record for sustained fusion power. In a recent experiment, JET produced 59 megajoules of heat energy from fusion over the five-second duration of the experiment, which comes out to an average fusion power of about 11 megawatts (megajoules per second). The UKAEA and EUROfusion have produced a video on JET’s history of D-T experiments and the significance of the latest news. 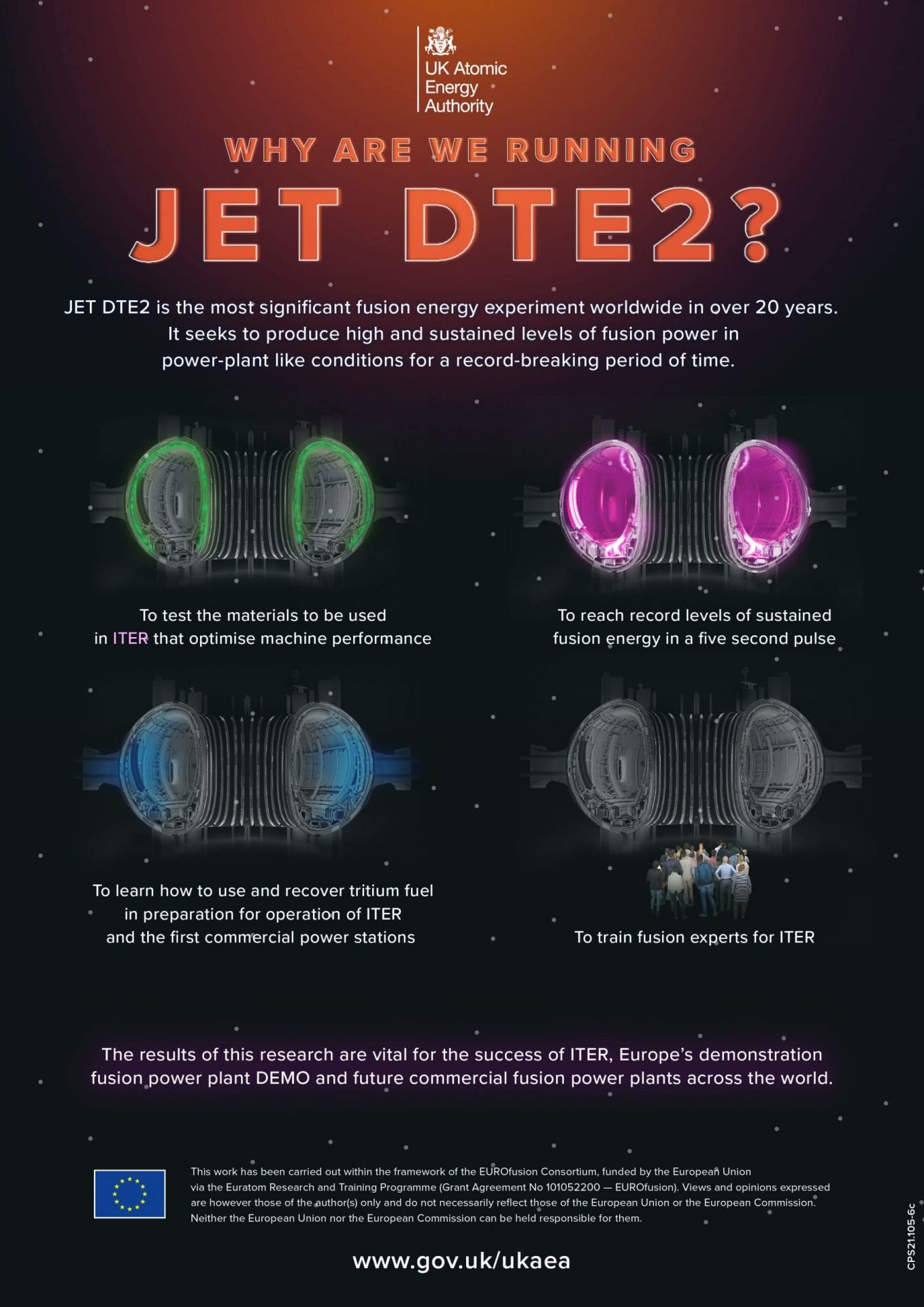 ITER takes note: JET fuses deuterium and tritium, the same fuel destined to burn in ITER, the international fusion tokamak under construction in the south of France. After JET was outfitted with a new inner wall of beryllium and tungsten in 2011, it had even more in common with ITER. Experiments conducted in JET can test materials that will be used in ITER, help researchers learn how to use and recover tritium fuel, and train the fusion experts who will work on ITER.

Bernard Bigot, ITER’s director general, said, “A sustained pulse of deuterium-tritium fusion at this power level—nearly industrial scale—delivers a resounding confirmation to all of those involved in the global fusion quest. For the ITER Project, the JET results are a strong confidence builder that we are on the right track as we move forward toward demonstrating full fusion power.”

European collaboration: Ian Chapman, the UKAEA’s chief executive officer, said, “These landmark results have taken us a huge step closer to conquering one of the biggest scientific and engineering challenges of them all. It is reward for over 20 years of research and experiments with our partners from across Europe.”

Tony Donné, EUROfusion’s program manager, said, “This achievement is the result of years-long preparation by the EUROfusion team of researchers across Europe. The record, and more importantly, the things we’ve learned about fusion under these conditions and how it fully confirms our predictions, show that we are on the right path to a future world of fusion energy. If we can maintain fusion for five seconds, we can do it for five minutes, and then five hours as we scale up our operations in future machines.”

A STEP announcement is expected this year: The UKAEA’s STEP (Spherical Tokamak for Energy Production) program plans to site a prototype fusion energy power plant on U.K. soil. On January 24, the UKAEA said that the selection of a site from a short list of five locations announced in October 2021 is expected later in 2022. Community engagement events in the five locations ran through February 10.

The STEP site will be selected by the secretary of state at the Department of Business, Energy and Industrial Strategy, according to the UKAEA, which will make recommendations based on a set of criteria, including support from the local community and the potential for socioeconomic benefits.

“STEP is not just of strategic importance to UKAEA, but to the national and global efforts to harness fusion technology in the fight against climate change,” said Tristram Denton, head of commercial and program development for STEP. “While it’s still early days, we anticipate that the host region will become a global hub for a wide range of technological and scientific expertise, leading to massive economic opportunities.”