Los Alamos: Los Alamos National Laboratory was established in 1943 as Site Y of the Manhattan Project for a single purpose: to design and build an atomic weapon. Although the scope of work conducted at the DOE’s senior national laboratory has broadened considerably since the pivotal day of the Trinity Test, LANL’s primary mission has remained nuclear weapons research and development.

While executing this mission during the Manhattan Project era and in the decades that immediately followed, LANL released hazardous and radioactive materials to the environment through outfalls, stack releases, and disposal areas. In addition, mixed low-level and transuranic (TRU) waste was generated and staged in preparation for off-site disposition.

EM’s mission at Los Alamos is to safely remediate and reduce risks to the public, workers, and the environment associated with legacy material, facilities, and waste sites at LANL. Of the more than 2,100 contaminated sites at LANL originally identified for remediation, more than half have been cleaned up and closed. Those range from small spill sites with a few cubic feet of contaminated soil to large landfills encompassing several acres.

Some of those landfills were at Technical Area 21, which was a complex of Manhattan Project and Cold War buildings that housed LANL’s plutonium processing facility. It was the site of groundbreaking tritium research for energy, environment, and weapons defense. Much of the Manhattan Project and early Cold War operations took place at what was known as Technical Area 01. Perched on a plateau near a canyon edge, the site was LANL’s original footprint and is now part of the town of Los Alamos.

Oak Ridge: In 1942, the U.S. government acquired land that became the Oak Ridge Site. By March 1943, 56,000 acres were sealed behind fences, and major industrial facilities were under construction to develop a first-of-a-kind weapon. A secret city of nearly 75,000 people arose almost overnight to support this world-changing task.

During the Manhattan Project, the K-25, S-50, and Y-12 plants were built to explore different methods to enrich uranium, while the X-10 site was established as a pilot plant for the Graphite Reactor and to explore how to produce plutonium.

Throughout the following decades, these sites would each go on to push the boundaries of science that revolutionized power production, enhanced national defense, advanced understanding in biology and genetics, and developed new fields of medicine. While these missions were beneficial to the world, they also created environmental legacies that EM is now cleaning and removing to enable the next generation of innovation. An aerial view of the K-25 plant under construction at Oak Ridge during the Manhattan Project.

The K-25 plant— the present day East Tennessee Technology Park (ETTP)— enriched uranium using the gaseous diffusion process. Due to the success of this technique, the original plant was expanded during the Cold War. It contained five enormous uranium enrichment facilities, including the largest building in the world when it was constructed, and hundreds of support facilities.

After nearly 15 years of large-scale demolition and environmental cleanup, Oak Ridge’s EM program is completing major cleanup at ETTP this year—a goal the DOE is calling Vision 2020. It will mark the first time in the world that an entire enrichment complex has been removed. The site is being transformed into a multiuse industrial park that offers opportunities for economic development, conservation, and historic preservation.

Separately, Y-12 was built to enrich uranium for the first atomic weapon using an electromagnetic separation process. The Cold War brought change to Y-12 as new processes for separating lithium were added and uranium enrichment missions were conducted elsewhere. After nearly 15 years of large-scale demolition, EM has cleared away 13 million square feet of aging, contaminated structures at the East Tennessee Technology Park at Oak Ridge.

EM is ramping up efforts to address Y-12’s primary contaminant, mercury. Those efforts include the construction of the Mercury Treatment Facility, which is now under way, and funding research for new mercury remediation technologies. Crews are transitioning to the site to begin deactivating and demolishing its old, deteriorating facilities. This will eliminate hazards, enable modernization, and provide space for new missions at Y-12, according to the DOE.

The first mission of X-10, present day Oak Ridge National Laboratory, was to develop and test the experimental Graphite Reactor, which went critical in March 1944. It was used initially as a pilot test facility for plutonium production. In the years following the Manhattan Project, 13 research reactors were designed and built on-site, and staff developed or participated in developing numerous nuclear material reprocessing methods.

Scientists there would also go on to research genetics and the biological effects of radiation. ORNL’s mission continued to grow through the years and has expanded its capabilities to be at the forefront of supercomputing, advanced manufacturing, materials research, neutron science, clean energy, and national security.

EM said that it is supporting ORNL’s missions by eliminating the lab’s inventory of TRU waste and uranium-233 and ramping up efforts to deactivate and demolish its large inventory of old, contaminated facilities. In this photo from World War II, Hanford’s B Reactor can be seen between the water towers, along with other facilities that supported reactor operations.

Hanford: Once a thriving agricultural area known for its early-to-market fruit, the area in southeastern Washington State now known as the Hanford Site was transformed almost overnight when the Army Corps of Engineers in 1942 chose it as the site of the Manhattan Project’s plutonium production facilities.

More than 51,000 workers from across the nation came to Hanford over the next few months. In just 18 months, these workers constructed and began to operate a massive industrial complex to fabricate, test, and irradiate uranium fuel and chemically separate out plutonium. That plutonium was used for the Trinity Test and for the atomic weapon used on Nagasaki, Japan, on August 9, 1945.

Hanford continued to expand its plutonium production capabilities in support of the Cold War, ending up with nine production reactors and five chemical separations plants. For more than 40 years, the Hanford reactors produced plutonium for America’s defense program. In 1989, the Hanford Site mission changed to cleaning up liquid and solid waste, taking down facilities, and restoring the environment to protect the Columbia River. 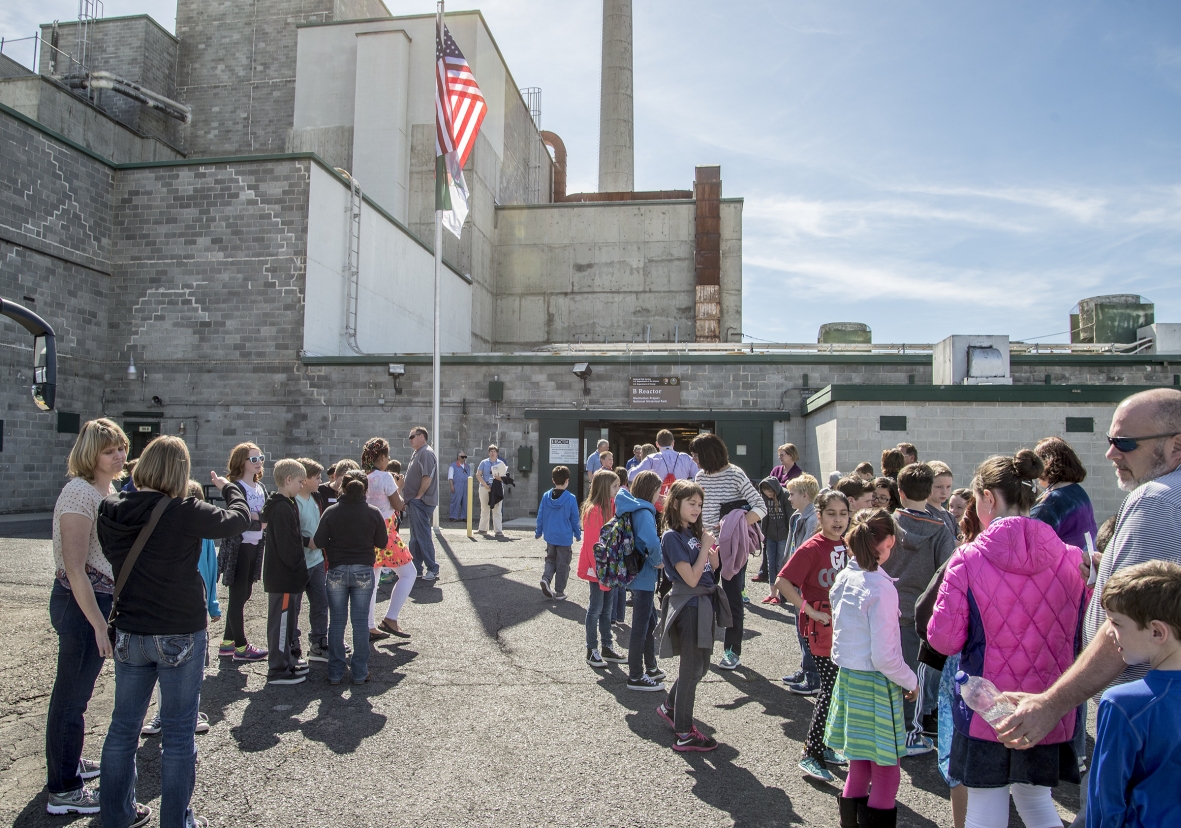 Students and school personnel arrive at B Reactor for a tour. The DOE works with local elementary, middle, and high schools to highlight B Reactor’s role in ushering in the atomic age.

Since 1989, Hanford has been the site of an extensive cleanup program undertaken by EM under an agreement with the U.S. Environmental Protection Agency and the Washington State Department of Ecology. Since the cleanup of Hanford began, 1,353 waste sites have been remediated and cleared, 18.3 million tons of solid waste has been collected and disposed of, and 23 billion gallons of contaminated groundwater has been cleaned and returned to drinking-water quality.

All of the nuclear reactors associated with the Manhattan Project have been decommissioned.

The Government Accountability Office is recommending that Congress clarify the Department of Energy’s legal authority to sell depleted uranium hexafluoride (DUF6) left over from uranium...

The House Science, Space, and Technology Subcommittee on Energy held a hearing last week to evaluate the Department of Energy’s approach to research and development on new strategies and...