Southwest Research Institute (SwRI) has developed a suite of ultrasonic guided wave sensors to inspect these inaccessible regions. Guided waves are relatively low-frequency stress waves compared to conventional ultrasonic waves used in nondestructive evaluation. The waves travel in and are guided by the structure and can travel several meters along the vessel wall. When the guided waves encounter geometric changes, such as damage due to corrosion pitting or cracks, they are reflected back and measured by the sensor as distinct signals, as indicated in Figure 2. 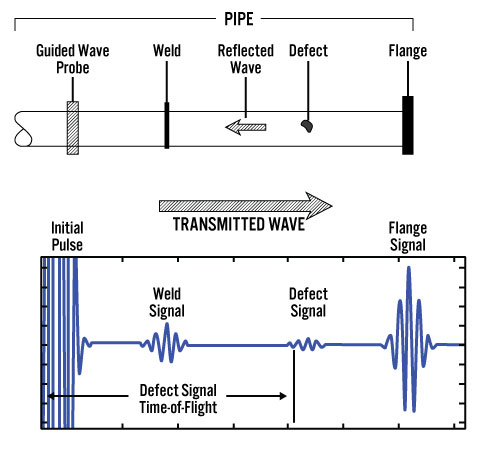 For large vessels, such as the one shown in Figure 1, a sensor can collect multiple waveforms across multiple locations because a waveform collected at a single location cannot possibly cover the entire vessel. By taking data at multiple positions, the entire structure can be inspected. Typically, the data are collected using a linear scan, but other scan plans can be adopted. Moreover, these waveforms provide overlapping coverage of regions of the vessel, allowing for different “views” of any features present. For this scenario, the data would be combined using a synthetic aperture signal processing algorithm, which can improve the detection sensitivity beyond what is possible with a single scan.

Inspecting a boiling water reactor (BWR) Mark I drywell illustrates the advantages of the SwRI technology. In this case, access to the vessel wall in the drywell interior is limited to just above the basemat. A handheld sensor, shown in Figure 3, generates guided waves using the magnetostrictive effect. This technique relies on the principle that magnetic materials change their dimensions when they are subjected to a magnetic field. The sensor generates an elastic wave in a strip of embedded iron cobalt and is coupled to the inspection surface with highly viscous shear wave couplant. Figure 3. Guided wave sensor on a mockup of a BWR primary containment vessel.

Another application for guided wave inspection is a pressurized water reactor (PWR) metal containment vessel. SwRI accessed the outer circumference of the vessel, in the annular region between the metal containment and the concrete missile shield. An electromagnetic acoustic transducer (EMAT) used for this inspection, shown in Figure 4, generates guided waves directly in the metal structure, without the need for an ultrasonic couplant, allowing greater control over the guided wave mode. A pulsed coil in the shoe of the sensor and a static field from the electromagnet generate the guided waves using the magnetostrictive properties of the steel wall. Figure 5 shows how the sensor inspects a sample vessel, with the side of the sensor placed against the vessel wall. In the nuclear containment vessel, SwRI demonstrated that guided waves could penetrate at least 2.6 m below ground, in a region where the containment is encased in concrete on both sides. SwRI is developing a robotic system to deploy ultrasonic sensors to inspect the bottoms of both primary and secondary liners of underground tanks that store radioactive wastes at the U.S. Department of Energy Hanford Site.

For this case, SwRI is miniaturizing a sensor similar to the one shown in Figure 4 to allow it to be deployed and controlled remotely in the highly radioactive region between the primary and secondary tanks, as shown in Figure 6. Data from a mockup test are shown in Figure 7. The sensor beam can be pointed straight down (center image) or tilted at 20-degree angles in either direction. The canted beam can detect defects in the weld because the large reflection of the weld bead does not return to the sensor. In this figure, the weld lines are shown as magenta dots overlaid on the color map of the signal returns. The sensor successfully detected about three quarters of the defects, including one defect 4.5 m from the sensor, a 25 percent through-wall 9.5-mm (3/8-inch) diameter pit in a weld, and several defects that required the beam to go through four welds. Figure 7. Guided wave data taken with a modified version of the sensor shown in Figure 4 to allow directing the guided waves at different angles. The circles indicate successful detection of defects.

These case studies illustrate the versatility of the technology and SwRI’s ability to tailor applications to meet diverse needs for inspections, particularly for inaccessible areas. Other guided wave sensors can be developed, calibrated, and deployed taking into consideration the dimensions, materials, access constraints, and operating environment.