Closer Than We Think

I'm writing this on National Maritime Day 2020, a day in which we think of and thank all those who have worked on the water moving people and things.  Our nation's maritime history isn't as long as that of some other nations but it has been rich and, worldwide, significant.  We've contributed a number of "firsts."

Close to my heart at all times is the advent of nuclear propulsion for commercial shipping - a development all too rapidly truncated as cost and concern played their usual roles.  While the promise offered to us by the decade-long operation of NS SAVANNAH seems gone, it in fact has never left; the benefits of nuclear propulsion for commercial ships are today exactly what they were then, perhaps plus a few.

Of course, many valid concerns were raised during the time when nuclear ships like SAVANNAH sailed the seas.  Crew cost was high - higher than anticipated, and that led to problems.  Port access in nations fearful of the atom in any context whatsoever required either reestablishing understanding and friendship or, in worse cases, rerouting.

This American Turbine gas cooled, closed cycle direct drive shipboard plant design was one of many cooked up in the 1950's and 1960's intended to be "dropped" into an existing ship design. The simple "nuclearization" of established designs turned out to be a fundamental mistake for many reasons at that time, but today we are seeing, increasingly, very small reactors being designed. That might actually unlock nuclear conversion of existing designs at some future time. (Photo from sales brochure in my collection.)

I remain today hopeful that I will see, in my lifetime, a return of the atom to the seas (Naval vessels aside) and I actually believe, today, that we're closer than ever - at least from technology and policy standpoints.  Why is that?  Here are some thoughts:

•Small reactors are making a large comeback.  We're seeing a major push to replace fossil power with nuclear, and this means moving reactors into jobs only partly explored "the first time around" (q.v. "The First Nuclear Era.")  Having a smorgasbord of reactor designs available means that those who are ship-minded will have established technologies they can select without having to come up with the entire R&D cost.

•As we are seeing Oklo's efforts proving out, the NRC is moving rapidly to advance the conception of what the licensing process should look like.  As we move to this new era of licensing, it could be far easier to make the safety case for shipboard nuclear power on the open seas.  Inland (such as craft for the Mississippi or the Great Lakes) will likely never happen for a variety of reasons but we can rightly hold renewed promise for ourselves in the commendable progression of views and values at the NRC.

•The scales may soon be tipped away from nuclear risk and toward environmental risk.  Although one never wishes to make a selection based solely upon what the winner isn't, one has to concede that the desire to halt carbon and other emissions from the vast network of ships constantly at sea may work to push nuclear again to the fore for clean shipping as the default choice.  That opportunity should be watched for and capitalized on by any and every entity with even a remote interest in entering the field as a reactor vendor or designer.

•The original nuclear commercial ships encountered problems of basic conception in that it proved out that their nuclear operating crews were too expensive when compared with the revenue-generating capacity of the specific ships.  It must be pointed out that NS SAVANNAH was a prototype, and was not intended to make money for the US Maritime Administration - but we build prototypes to reveal design flaws and construction / operating issues, which SAVANNAH did.  Today, however, we are seeing increasing likelihood of the acceptance of automated control by computer and very likely multiple reactors under one human watch as a logical result.  These developments will have to be played on deliberately to prevent the crew pay issue from becoming a show stopper next time around. 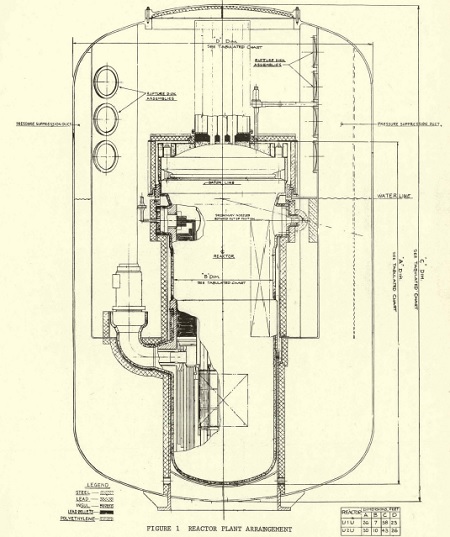 We have seen the spread today of what are commonly called "Small Modular Reactor" designs, a number of which are really iPWR or "Integral Pressurized Water Reactors."  This basic concept was first developed by B&W in response to the size and weight of NS SAVANNAH's NSSS and proved later to the the nuclear ship design concept of choice for further commercial ship development, by all makers.  Shown here: United Nuclear Corporation U1U / U2U overall design of integral PWR and containment.

I think we're getting into that "right space" where we'll begin to see serious interest in nuclear shipping.  As I've said before here, and elsewhere, we'd likely see nuclear applied first to the largest and the fastest types of ships, where it can make money.  But should that prove successful, given today's environmental leanings, the stage would be set for atomic ships of many sizes and speeds.  And I think, today, we have the right minds and companies in place to realize that there's a wind blowing and who'll set their sails for the horizon.

Will Davis has been a member of the Board of Directors for the N/S Savannah Association, Inc. He has been a contributing author for Fuel Cycle Week, and wrote his own popular blog Atomic Power Review. Davis is also a writer for the American Nuclear Society, and serves as Vice Chair of ANS' Book Publishing Committee. He is a former U.S. Navy reactor operator and served on SSBN-641, USS Simon Bolivar.  His popular Twitter account, @atomicnews is mostly devoted to nuclear energy.  He has not made an avatar, so you're stuck with this photo.