Friends and colleagues - Usually I write about "the old days" of nuclear in this space but something came up in current events that really sticks in my craw, and I have to shine the spotlight on it here.  So please indulge me and read along.  (We'll get back to "the old days" soon enough, don't you worry!)

Several articles earlier this month - this one being typical - referenced a definite move ahead in the effort to get a commercial SMR plant constructed.  South Korea's KAERI (Korea Atomic Energy Research Institute) has moved beyond a simple MOU with Saudi Arabia on a SMART SMR nuclear plant and is replacing that with an actual (pre-build) engineering contract.  The other side of this contract is Saudi Arabia's nuclear entity, KaCare (King Abdullah City for Atomic and Renewable Energy.)  This contract will set up a jointly operated agency, to be named SMART EPC, which will perform the actual plant design.  According to Nuclear Engineering International's reporting, Korea Hydro & Nuclear Power has been brought into the fold in order to lend its engineering and construction expertise, thus ensuring the project gets built as planned.

As soon as I read about this development, I immediately thought "what a shame it is that this has had to move overseas."  You see, originally KAERI thought that Korea Hydro and Nuclear Power would go in for the SMART reactor and order at least one prototype power plant.  Artwork was made showing what KAERI thought the plant might look like, which you can see below. (Courtesy KAERI.) 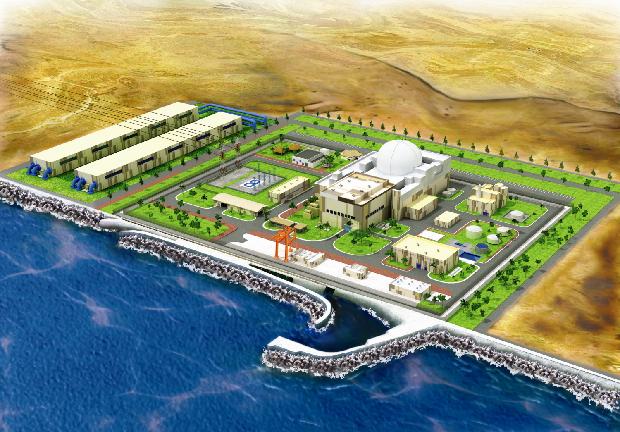 What actually happened though was quite different; you see, KHNP wasn't interested in anything with this small of a power output (100 MWe).  Korea was in the midst of what was (then) assumed to be a prolonged, massive buildout of gigawatt-scale units in very large multi-unit power stations, a process consuming great amounts of effort and money.  Any design revisions or changes were occurring not in relation to new designs but instead to refinements of the large LWR continuously plant and NSSS evolved from the CE-80, which ended up being the very largely stillborn APR+.  KHNP simply did not order a SMART SMR plant, and this somewhat surprising (for KAERI) development forced KAERI to regroup and look elsewhere for a market for this SMR, which in fact was approved by Korea's regulator in 2012.

Aside - prior to the present Moon government KHNP did in fact start to look at a multi-unit plant using SMART SMR modules not unlike that conceived by NuScale in the broadest terms.  At least one illustration of such a plant was produced by KHNP, shown below. (Courtesy KHNP.)

Of course the reason the SMART SMR had to look outside Korea for construction is simply explained in one word:  Moon.  The Moon Jae-In administration has a rabidly anti-nuclear stance, and considered itself elected on a "nuclear shutdown" platform.  Even if KHNP had decided on building a six-reactor SMART power plant, it would have been cancelled under the Moon administration as was practically everything else.  Which leads me to my final point.

Today, as I write this (Jan 23, 2020) we have this completely predictable headline:  "S. Korea's Ecosystem of Nuclear Power Plant Industry Collapsing."  The always-reliable Business Korea website today reports that numerous manufacturers in Korea are simply allowing their nuclear component manufacture certs to expire because, frankly, there's not enough business to support the high cost of keeping them active.  This wholly predictable and in many quarters expected result is also a key effect of the Moon Jae-In anti-nuclear policy, and it means that more and more "things" that might have gone to contribute to (fill in any exported nuclear project here) will have to come from outside the country, driving up cost, increasing chances of errors, perhaps introducing certification problems again (a road Korea doesn't want to go back down) and in general complicating what had at one time seemed to be a destined future of greatness for a now hobbled Korean nuclear enterprise.  The collapse of the Korean industry was predicted widely - in business circles, at least, where pro-nuclear or environmental optimism isn't any use in whitewashing economic and operational fact.  There just isn't anything there to drive the base that existed before, and it's not going to do anything but continue to shrink unless the nation elects a new leadership and pulls completely around.  Given Korea's recent history that's unlikely.

The juxtaposition created by the SMR announcement and then the N-type certification news could not be more stark.  On the one hand, I am happy to see KAERI finally getting to something near-tangible on its key project and once-upon-a-time shining hope.  Yet in another way it seems as one quick, loud but brief shout in the gathering darkness.

Will Davis (a.k.a. "Dr. Buzzkill") has been a member of the Board of Directors for the N/S Savannah Association, Inc. He has been a contributing author for Fuel Cycle Week, and wrote his own popular blog Atomic Power Review. Davis is also a consultant and writer for the American Nuclear Society, and serves as Vice Chair of ANS' Book Publishing Committee. He is a former U.S. Navy reactor operator and served on SSBN-641, USS Simon Bolivar.  His popular Twitter account, @atomicnews is mostly devoted to nuclear energy.  Davis also answers to the name "Captain Bringdown."