Over the years that I've been writing for ANS, I've managed largely through that association to come into possession of a number of fairly odd things.  I mean, all of us have things that the "normal person" (and by that I mean non-nuclear) would find pretty strange, but I'm telling you I have some strange things that are a bit further out than garden-variety strange.  I'd like to tell you about just two.

At one point after having written about some of the smaller upper-western "rural" reactor projects I was contacted by someone in the nuclear field (remaining nameless) who worked at a plant up there to simply get my address.  This gentleman simply "wanted to send me something," figuring that it would be in good hands.

A while later I received a very large package which contained three big, thick books - books that really surprised me when I looked at them.  They were nuclear plant operating manuals, published by Allis-Chalmers, for the Pathfinder plant. 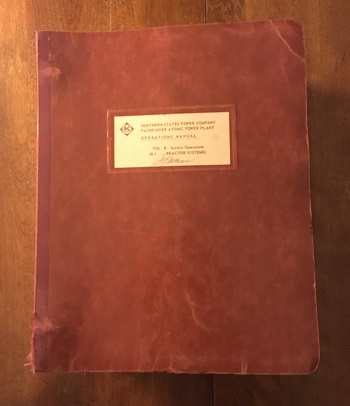 The manuals I received aren't the entire set - there are three big books though, and there's some insight.  This plant was unusual, as I've written many times, because it attempted to include nuclear superheating of steam already developed in a BWR.  The idea here was to use "one reactor" to do that but really what they had was two very closely coupled but yet distinctly different reactor cores in the same vessel; an annular core consisting of boiling water elements around the outside, with steam flow upward (and forced recirc) and then, in the very center, a down-flow superheater core of highly enriched uranium with a painfully thin clad.

Startup of the reactor and transition to operating on the grid was, by the account given in this manual as I read the operations anyway, a painfully protracted affair.  The boiler core elements were started up first, with the central superheater flooded with water.  Only when the boiler elements were critical with recirc flow would the central superheater be drained and then started up itself.  The unique nature of the design led to totally unique operating practices, and it's fascinating to read through these manuals and see both the adventurism and in some ways the folly of that early pioneering era. 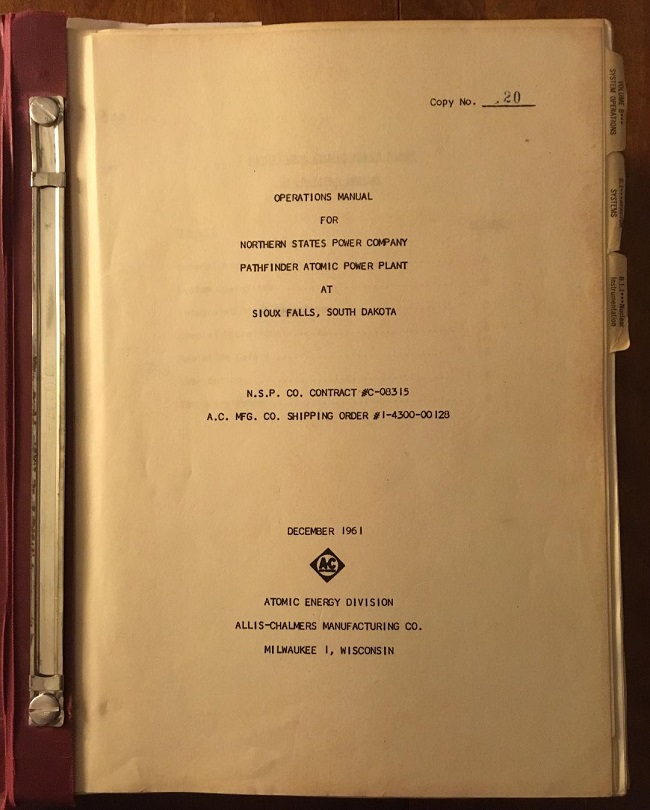 WHAT KIND OF PAPERWEIGHT IS THIS

Some years back I was fortunate to be able to bid on and win a very large (six or seven bankers' boxes full) collection of paper, books, and other ephemera from a gentleman who had worked a couple places in the nuclear industry in the early days.  He had worked at Westinghouse Bettis when it was designing A1W / A2W / C1W / F1W as well as S5W cores.  He moved from there to Sylvania-Corning Nuclear, who was known at that time as the first commercial producer of nuclear fuel.  That company even had a standardized catalog of items (generally MTR type) that could be ordered right off the shelf for use in test and research reactors.

There were, in the boxes, a number of other things and in the one box that had some miscellaneous mixed things there was this odd object: 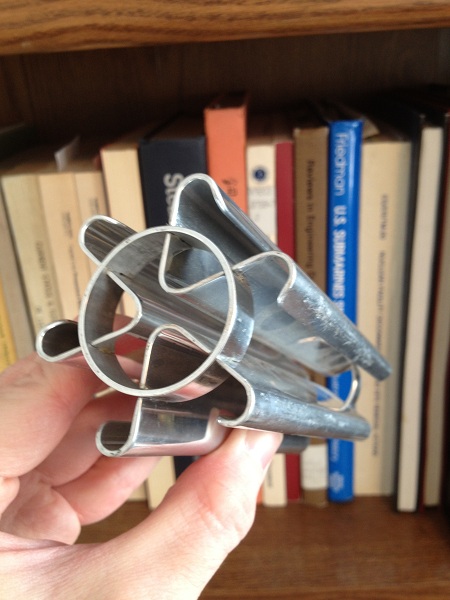 I thought "What is this? It's the dumbest looking paperweight I ever saw.  What use could this be?"  Only after beginning to root through the piles of mixed paperwork and books did I realize what I was holding in my hand.  It was a fuel element. 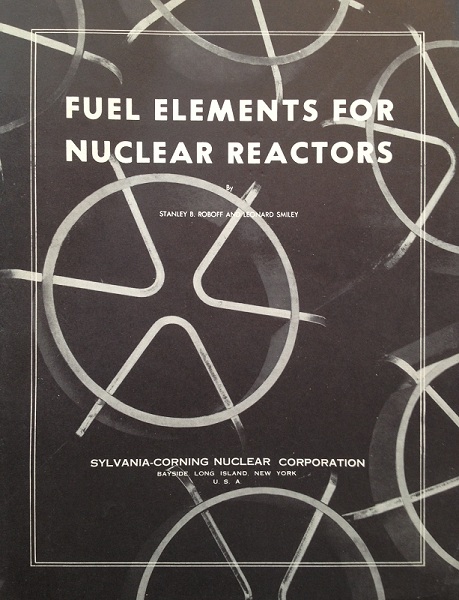 The very unusual element design was as a result of Sylcor having performed a complete redesign of the fuel elements for the Brookhaven Research Reactor, a very large pile reactor at BNL that was used for research and testing.  Originally the reactor had used slug fuel but these new elements, which linked together in each element three bent or formed plates using rings, as can be seen in my hand an on the cover of the brochure, allowed a great increase in flux but a drop in fuel temperatures (keep in mind that this pile like many was completely air cooled.)  The success of this changeover was something Sylcor tried to make hay with at that time, and was partially successful.  However, the company made a number of stumbles in its estimation of what forms commercial power reactor fuel would take and also was not nearly aggressive enough in following up on sales opportunities (it's all in the papers.)  The company didn't survive in the nuclear business.

Eventually in another box I did find a receipt for this sample (unloaded!) fuel element, which was signed out of Sylcor's inventory by the owner of all these papers to use on sales calls.  I wonder how many early trade shows - just like we see at ANS Winter Meetings - these Sylcor samples visited. 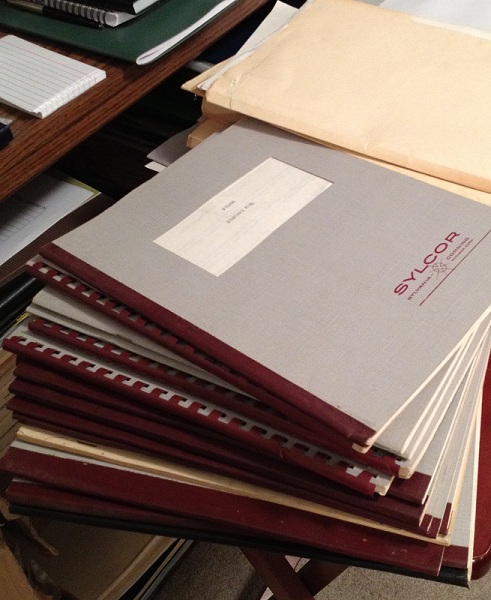 So, instead of using this pretty incredible artifact as a paperweight, I simply allow it to add to the interminable clutter on my desk or on my shelves.  It's in there somewhere, right now - I promise you!

Will Davis has been a member of the Board of Directors for the N/S Savannah Association, Inc. He has been a contributing author for Fuel Cycle Week, and wrote his own popular blog Atomic Power Review. Davis is also a consultant and writer for the American Nuclear Society, and serves as Vice Chair of ANS' Book Publishing Committee. He is a former U.S. Navy reactor operator and served on SSBN-641, USS Simon Bolivar.  His popular Twitter account, @atomicnews is mostly devoted to nuclear energy.  He is at this moment buried under tons of paperwork.  Send help!