Atoms in the Ice

December 5 marks the anniversary of the launch of the first nuclear powered icebreaker, the Lenin, in what at that time was the Soviet Union.  The job that icebreakers perform is among the very most demanding that any type of seagoing vessel endures due to the environment, the remoteness, and the tremendous stresses on the ship itself.  As it turns out, it's a perfect application for nuclear energy.  Let's take a look at this historic ship, its design and the operation of icebreakers with a variety of photos from my library. 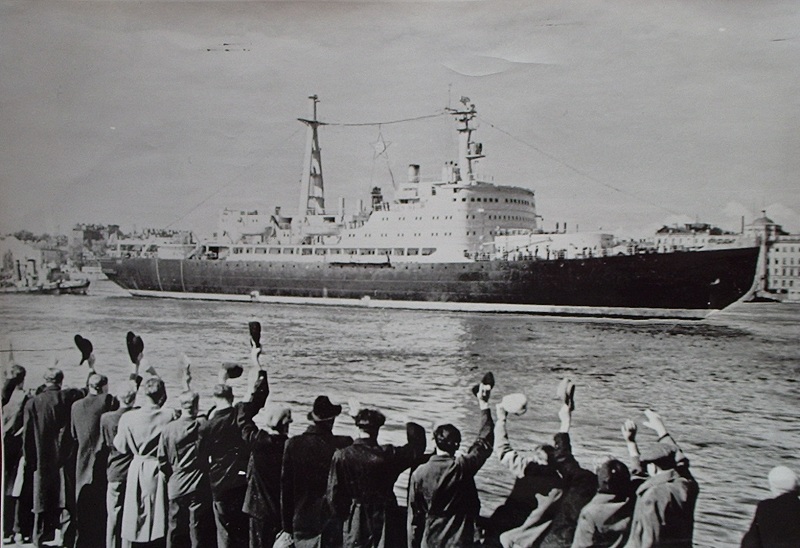 ICEBREAKER LENIN WHEN NEW IN SEPTEMBER 1959 (Official Press Photo, Will Davis collection.)  The "world" in which these icebreakers operate is so foreign and hostile to most people that it's out of mind.  These ships must continuously, day and night, for months at a time move through sea ice in order to clear important shipping lanes in Russia's north.  The ice can be minimal or, at times and in places, several feet thick.  Temperatures are well below zero (F) and the ships are away from port for extended periods up to several months.  Nuclear power makes large icebreakers into idealized ships; diesel or oil fired ships must be refueled, and thus their time-on-station is always absolutely limited.  With nuclear energy, the fuel for years of operation is always there; thus, the limits of the ships' operation is never fuel but rather crew considerations such as food. 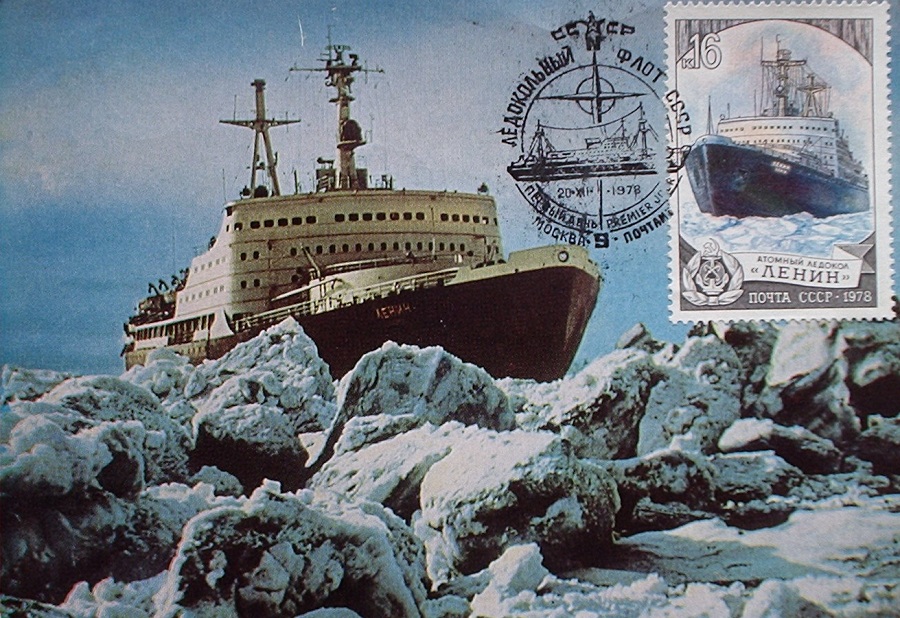 IN THE ICE (Post card in Will Davis collection).  Nuclear power did the same thing to icebreakers that it did to submarines - it made them larger.  Since the range of such ships was greatly extended (although, not truly unlimited with early cores) and vast power was available, not only was size no longer a limitation (for speed considerations) but actually a help since long range meant the need for more supplies.  In the case of the nuclear icebreaker family started by Lenin, helicopters are often used to ferry in supplies and personnel and can be used to ferry out sick or injured crew should that occur.  This "vertrep" capability coupled with ample size, good crew complement and plenty of stores on board makes these ships extremely resilient on station. 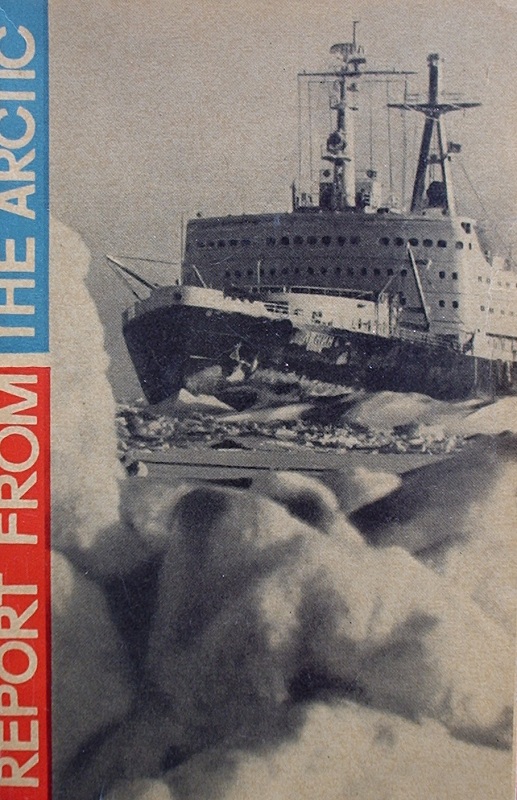 REPORT FROM THE ARCTIC (Book in Will Davis collection.)  This small book was published in order to promote the operation of the Lenin, and contains numerous stories from journalists who came from all parts of the world to take a voyage on this ship.  That's right - from the very beginning, these icebreakers have been fitted to take non-crew passengers.  In the case of the Lenin, there was the extra thrill that nuclear power was still very new when this book was published, and the various correspondents were amazed and thrilled at the quietness and power of the ship.  The same thing occurred a few years later with NS SAVANNAH in the United States, but the severity and remoteness of the environment in which Lenin operated added a real sense of adventure to the voyages. 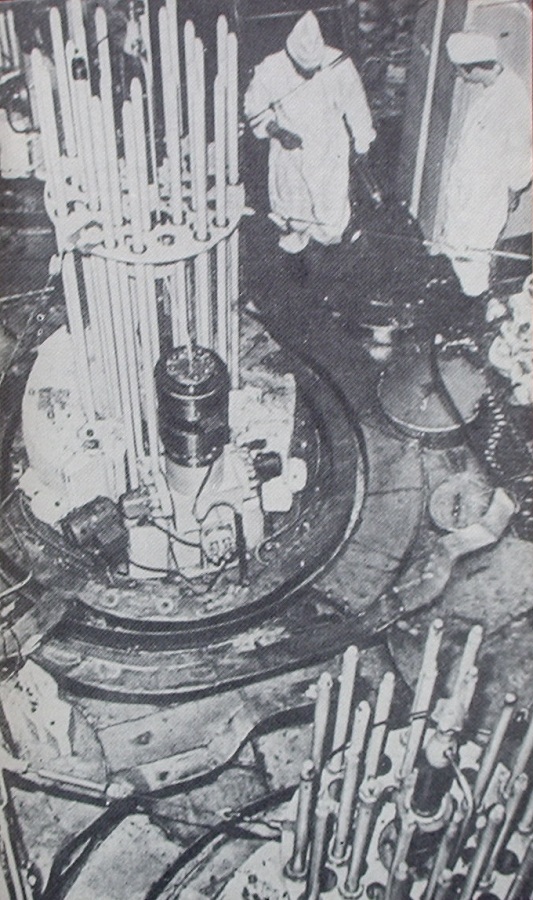 ATOMIC HEART (Reactor compartment upper level on Lenin, from "Report from the Arctic.")  The power plant originally installed in the Lenin comprised three OK-150 pressurized water reactors carried abreast in a single compartment.  These provided steam to a turbo-electric power plant used to both power and drive the ship.  As can be seen here, all three reactors' control rod extensions and drives were visible in this space, which was accessible (at least briefly) to technicians and even in a very controlled way to the passengers.  Eventually, after technical problems developed these reactors were replaced completely in 1970 by two larger OK-900 types.  The ship's 44,000 shaft horsepower output, obtained on three shafts, remained the same. 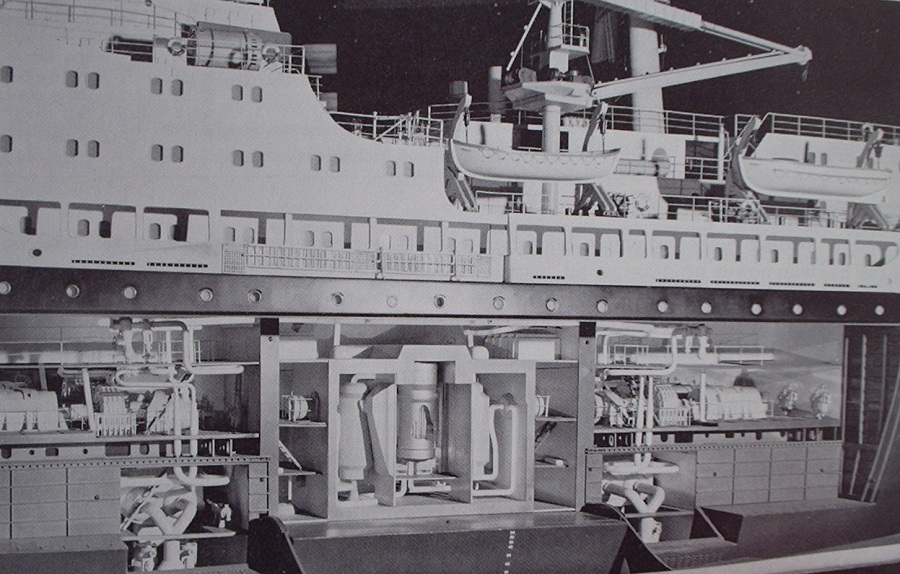 MODEL OF LENIN (Illustration from Atomic Energy Deskbook, Hogerton, 1964 in Will Davis collection.)  The reactor compartment with its thick shielding bulkheads can be seen in this photo of an elaborate model of Lenin.  Steam driven turbo-generators are carried both fore and aft of the reactor compartment.  The ship had three shafts; the center shaft having twice the power of each of the outer shafts.  This was accomplished by mounting one large 11,000 SHP DC motor on each of the outer shafts and a double installation of these (22,000 SHP) on the center shaft for a total of 44,000 SHP.  This powerplant was built turbo-electric to allow for rapid speed changes and even rapid reversals of the motors; this was important in the "ramming" method used in very thick ice, wherein the ship would ram the ice and then reverse back out.  These ships can rapidly move ballast to walk themselves out of ice using list (side to side leaning) and engines sort of like walking the cork out of a wine bottle. 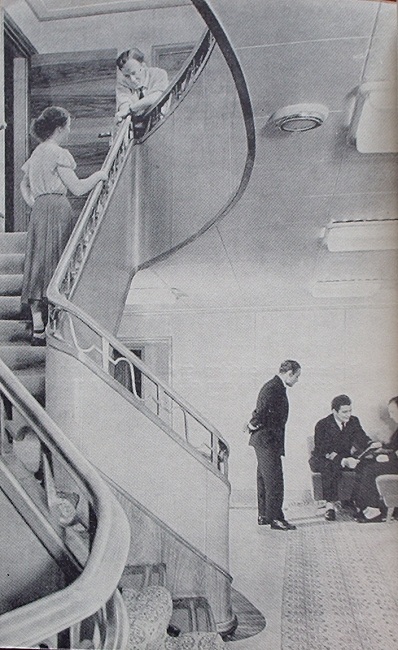 GRAND STAIRS (View on board Lenin from "Report from the Arctic.")  As mentioned earlier, the Lenin was constructed as a sort of a showboat in that it was meant from the beginning to carry passengers who, no doubt, were quite impressed by the habitability afforded a ship operating in such hostile environs.   From that time on, these icebreakers have carried many passengers and even are used on special scientific missions.  And speaking of many passengers and many years, according to OKBM Afrikantov (the reactor design bureau) the Lenin eventually operated over 654,000 miles in its roughly 40 year career and guided 3741 other ships through the ice.  This is an extremely impressive record for what would otherwise normally have been considered a prototype; as with many early US projects, conservative design and in some cases overbuilding led to a successful project which exceeded expectations.  Although many changes have been made to the newer Russian icebreakers, in many important ways their lineage right back to the Lenin remains clear today.  It's a very significant nuclear success story, and one that deserves to be told.

Will Davis has been a member of the Board of Directors for the N/S Savannah Association, Inc. He has been a contributing author for Fuel Cycle Week, and wrote his own popular blog Atomic Power Review. Davis is also a consultant and writer for the American Nuclear Society, and serves as Vice Chair of ANS' Book Publishing Committee. He is a former U.S. Navy reactor operator and served on SSBN-641, USS Simon Bolivar.  His popular Twitter account, @atomicnews is mostly devoted to nuclear energy.  He enjoys collecting typewriters and model trains and especially spending time with his nephew, Dawson.