This week's enhanced Friday Matinee feature is a fascinating, albeit short, compilation of television clips that were made at Sheldon Station in Nebraska.  This pioneering power station included a very modern coal fired facility and the Hallam Nuclear Generating Station, as one interconnected and combined facility.  The original idea was that coal could be used when the nuclear facility was not operating, although it was later planned to add another turbine generator to allow both ends (as it were) to run continuously.  The sodium-cooled Hallam facility was shut down before this happened.

The video is silent - but luckily, we can identify what's being shown in each clip.  First, a few illustrations for those unfamiliar with this site. 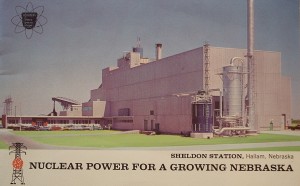 Above, a ground-level view of the plant as originally constructed.  We are on the "nuclear" end of the facility in this view. The plant in total cost $57 million to construct, with the U.S. Atomic Energy Commission pitching in over $51 million dollars and Consumers Public Power District about $5.75 million.  As with most AEC Power Demonstration Reactor Program projects, the owners constructed the steam and in this case fossil-fueled portions of the plant while the AEC hired contractors to build the nuclear end.  The reactor was designed and built by Atomics International, Bechtel Corporation was the architect-engineer, and Peter Kiewit Sons, Inc. was the constructor. (CPPD hired Stearns-Roger Manufacturing, Inc. to engineer and construct its part of the plant.) 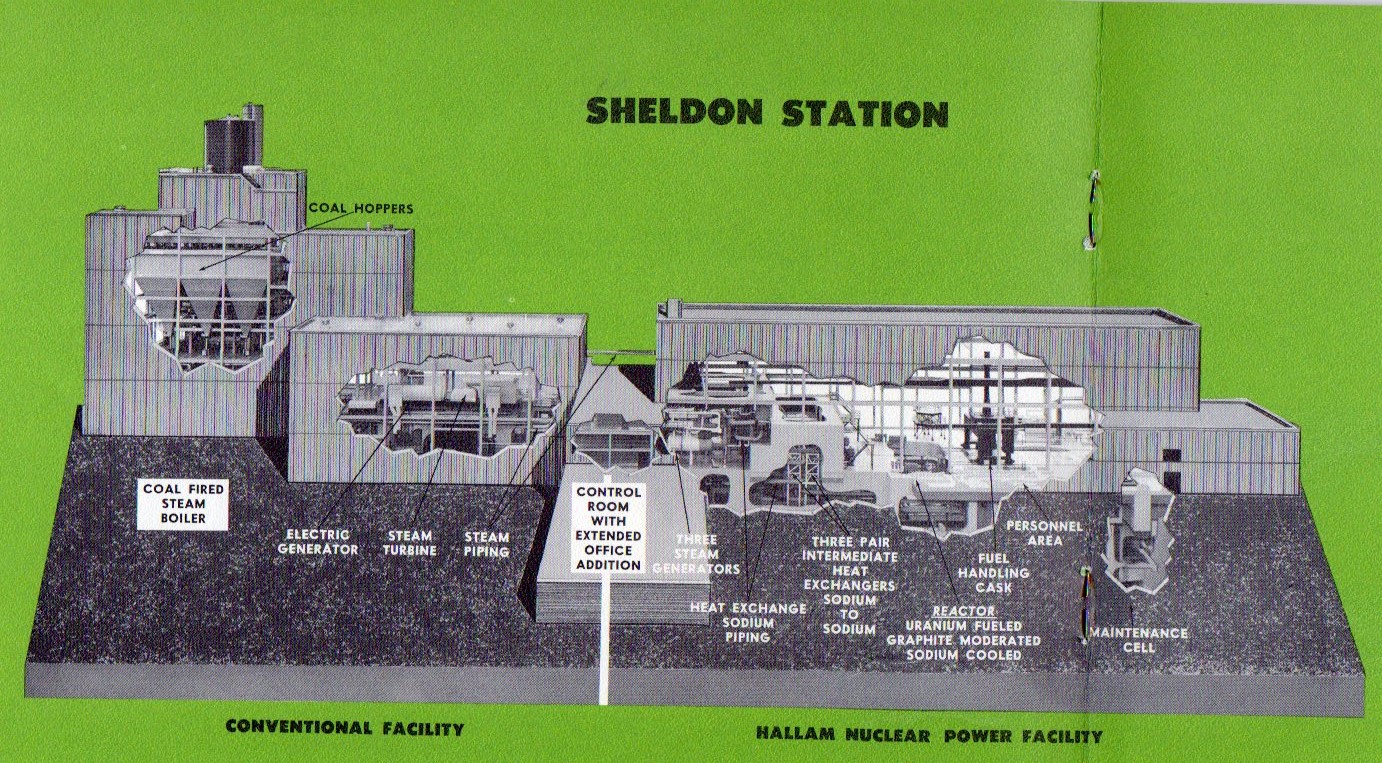 This cutaway from a Sheldon Station brochure shows the internal layout of the plant.  The reactor, a sodium cooled type, was rated at 254 MWt, and supplied 800 psi / 825F steam to the plant's single turbine-generator.  (Hot leg temperature was approximately 950F; cold leg, about 600F.)

The coal fired portion of the plant was also extremely modern; it comprised a Babcock & Wilcox triple cyclone type boiler running on crushed coal.  This boiler generated steam at 950 psig and 905F, although it was capable of 1900 psig and 1005F with continuous reheat operation, which was disabled initially.

The Westinghouse turbine-generator was modified specifically to be able to operate with a wide variation of steam quality, so that it would run acceptably from either the fossil or nuclear ends.  The machine was designed as a 128,000 KVA, 100,000 KWe machine for 1450 psig and 1000F steam.  The machine was modified without reheat and adjusted for 850 psig / 900 F steam with a net output of 75,000 KWe. 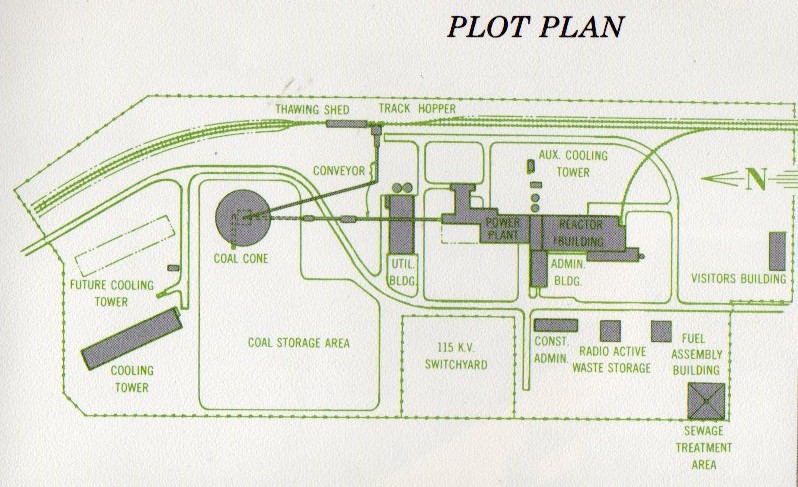 The site layout is shown here.  Notable is the "visitors building" at the East end of the site.  Rail service was provided to the nuclear end and as can be seen to the coal fired end, with multiple storage tracks and a coal thawing shed.  The Link-Belt coal handling equipment used to unload coal had a capacity of 350 tons of coal per hour.

Now, let's take a look at the archived television footage; I will note below what we're seeing in the footage by time stamp.

At the beginning, we are viewing the reactor operating floor.  The fuel handling machine is visible as is the circular top shield for the reactor, which weighed 250 tons.

At 0:24 we change views to see the partly unshrouded HP steam end of the turbine generator.

At about 0:30 we see the construction of the plant - an earlier view! - and are looking at the area where the 19 foot diameter, 33 foot tall reactor vessel would be installed.

At 0:34 we see the combined control room for the entire facility.

The final sequence appears to be work on the floor with a detector; the fuel handling machine would normally have been used to load and unload fuel. 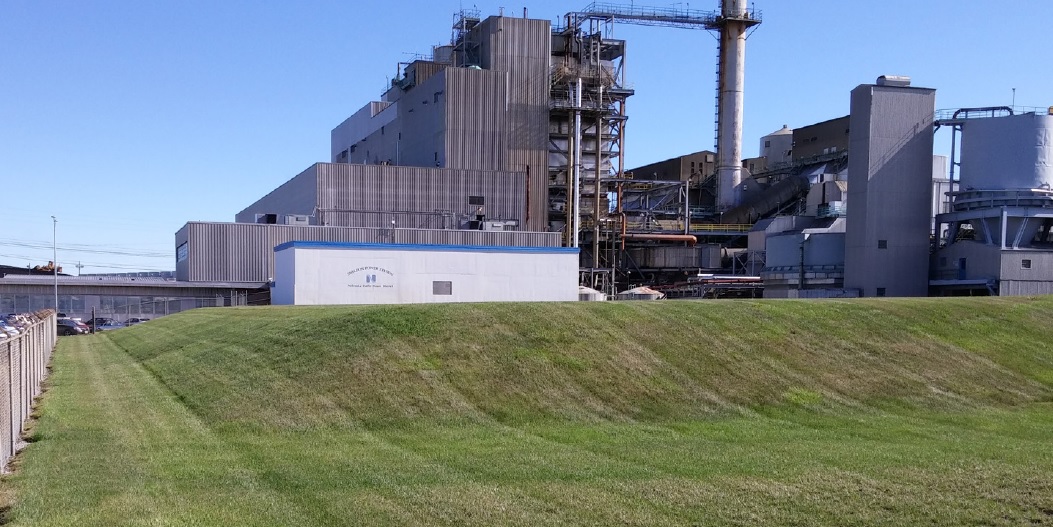 The Hallam nuclear portion of Sheldon Station only ran for a couple of years; it ran from 1962 to 1964 and was then shut down and decommissioned over the next several years.  The above view, courtesy the US Department of Energy Office of Legacy Management, shows the site of the former nuclear facility in the foreground.  The grassy plateau is the area of most of the former nuclear facility, leveled and with the reactor vessel still in place but entombed as are some other primary components.  The white structure visible here is the intermediate heat exchanger room, clearly shown on the earlier cutaway drawing.  According to the DOE, decay of the onsite materials (originally about 300,000 curies) will eventually allow release of the area for unrestricted use in about 2070. 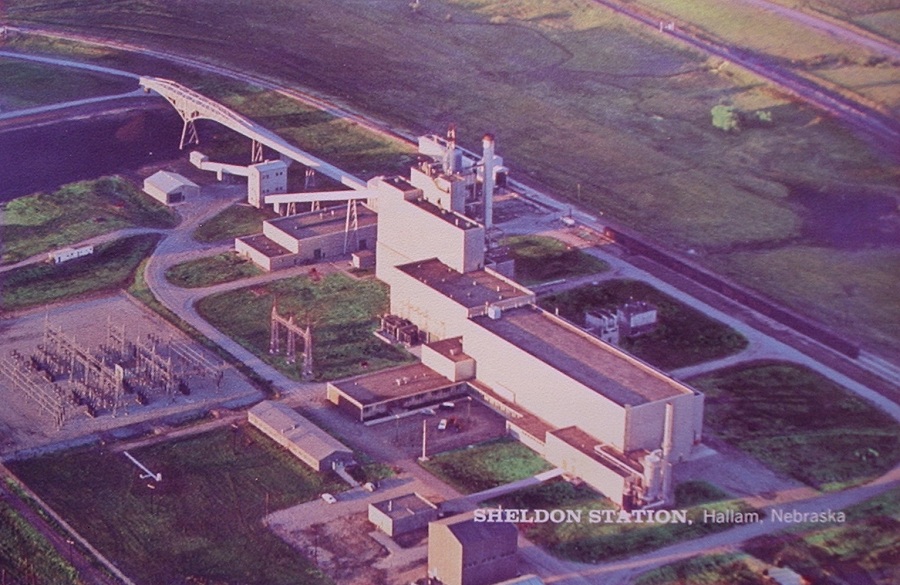