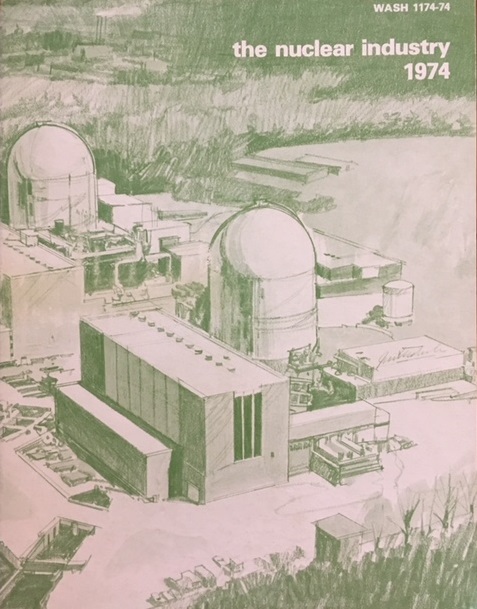 With the publication of the above WASH 1174-74, which was "The Nuclear Industry" for the year 1974 (and which was published in late Fall, 1974) a twelve year era ended.  This was the final publication of this important series, which launched in 1962 and thus covered the entire period of the rapid growth of nuclear energy in this country.

The reason for the ending of this valuable series was that the Atomic Energy Commission was abolished by the Energy Reorganization Act of 1974, and the new Energy Research and Development Administration did not have the focus of promoting nuclear energy or reporting specifically on the industry.  The ERDA's new Office of Industry Relations did publish this last edition knowing, as is told by the foreword, that it would be the last.

The report contains a historically significant and somewhat chilling relation right in the center of the text on Page 1:

"During 1974, two entirely unexpected developments occurred in the complicated economic structure of the power generation field to depress the historic growth pattern of the industry.  The first of these was a drop in demand for electric power, generated by pleas for conservation efforts and by consumer reaction to higher electricity bills.  The second was related to inflationary pressures, which placed many utilities at a disadvantage in raising new capital.  Utilities which saw the impending erosion of projected markets for power, together with those which found themselves in financial straits, began to reduce power plant construction programs and to defer the building of new units.  Nuclear units, in particular, were delayed because of their high capital costs, and because of their lengthy construction periods.  By the end of September, 1974, electric utilities had deferred construction of 70 previously-ordered power reactors, and had cancelled plans for nine nuclear units previously ordered."

The environment of the years up until 1974, during which most every utility in the United States predicted a strong, very long term growth in electric demand whose rates could sustain the extended construction of nuclear plants had suddenly vanished.  It would not return, although it is interesting today to speculate as to whether calls for deep decarbonization might produce a similar projected demand environment.

Even with this blow to the magnitude of construction the AEC continued to work to de-bottleneck itself, quite proudly proclaiming in WASH 1174-74 that it had managed to cut the time between the docketing of a construction permit application to the issuance of a construction permit to just 19 months.  Further, the AEC claimed it had achieved another goal in ensuring that plant operating licenses were ready when a plant was ready to load fuel.

The AEC observed quite correctly that "capital costs of all electric power plants have risen rapidly over the past few years," a fact not often quoted today when pundits and energy wonks look back on the cost and schedule history of nuclear power.  The AEC did note that there had been, however, a "rapid escalation" in the cost of nuclear plants which it attributed, at times, to the following factors:  Changes in regulatory procedures; delays in the licensing process; late delivery of equipment; unanticipated cost escalation due to schedule delays; scarcity of skilled labor; declining productivity of field labor; continuing inflation in the costs of equipment, materials and wages; changes in the scope of projects to meet additional requirements for environmental, safety, and newly-established standards.  Importantly the AEC immediately observed that many of these same problems were affecting large coal fired stations as well.

Relating to the above issues, as we've already seen, the AEC was working strenuously to reduce licensing time for the plants and was pushing standardized designs and pre-selected sites to speed licensing.  Much of the delay problem with large equipment (reactor vessels and pumps, turbine generators, and steam generators for PWR's) was being alleviated by 1974 by the introduction of new firms into the field to supply such components.  On the other hand, labor issues are not often mentioned in historical discussions of the increasing cost of nuclear power but, here, we again see complaint of labor cost and, very significantly, productivity in the field.  In many cases, only drastic measures such as putting the crafts on rolling 4-10's improved productivity.

According to "The Nuclear Industry" for 1974 the era of oil fired plants had more or less ended as a result, first, of skyrocketing heavy oil prices over a span of time but sharply because of the oil embargo of 1974.  This left essentially nuclear and coal as "available now" large base load plants; natural gas was still not a major contributor for electric generation overall, and in fact at least one nuclear plant (Wolf Creek) was ordered because the generator faced a cutoff of natural gas to divert it to residential and commercial use.  The report tells us that in 1974, the operating and maintenance costs of nuclear plants were actually LOWER than those of coal plants which had incorporated SO2 removal equipment (in their exhaust) so that nuclear plants and coal plants were, at that time, very competitive with each other.

In fact, nuclear was said to still be able to be competitive with coal even if the nuclear plant capacity factor dropped from the then-average 75 percent to 53 percent, or if capital cost for nuclear plants increased by as much as 40 percent, or if fuel cost went up 112 percent.  It's certain that we will never see nuclear that competitive cost-wise with fossil power again - or will we, with Small Modular Reactors?  (The author thinks "yes.") 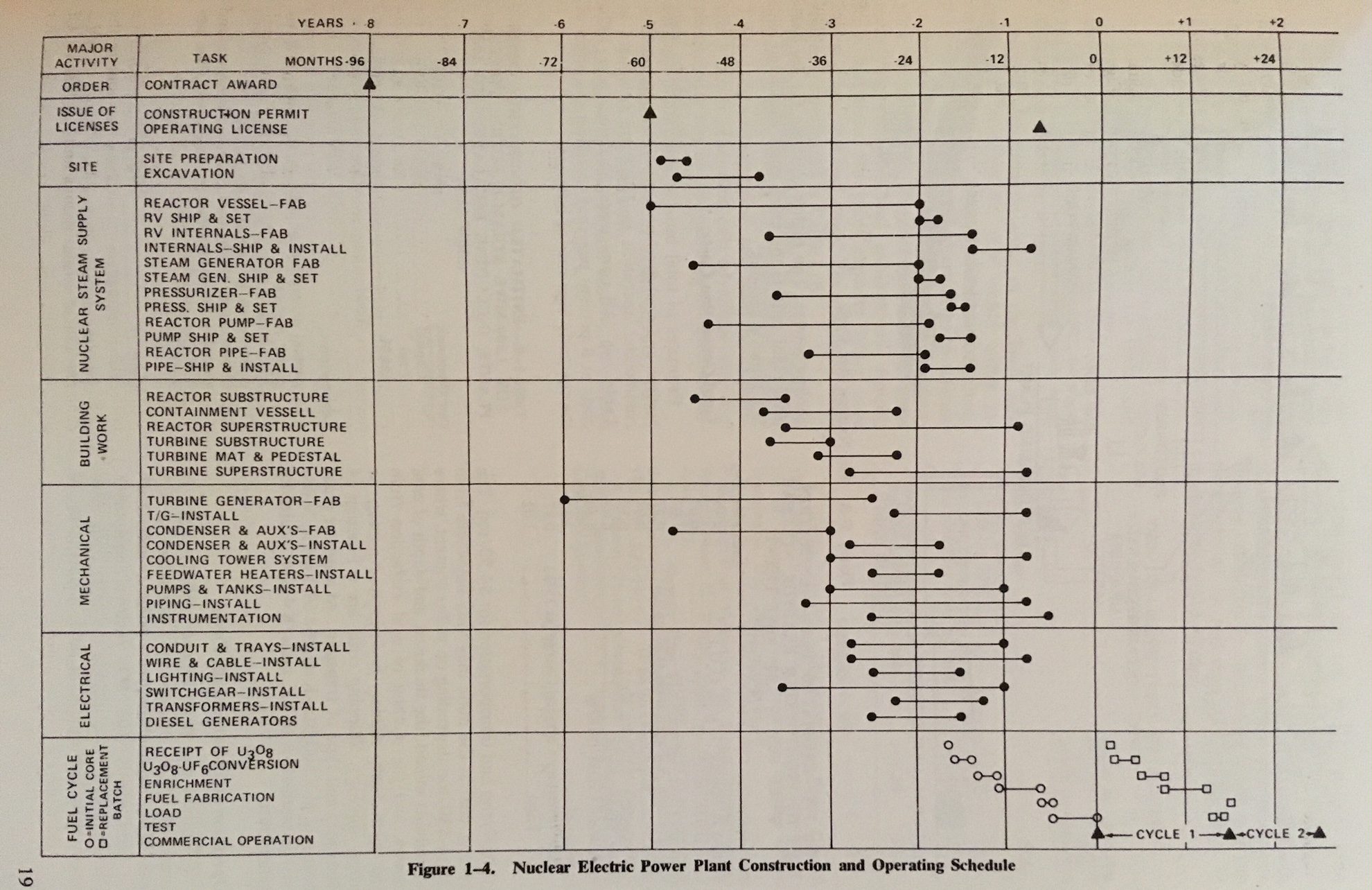 This is the sample, "average" nuclear plant build schedule as published in WASH 1174-74. It is essentially the same as that published the previous year; notable is the eight year span between contract award and commercial operation. This does not take into account pre-contract award events, obviously and also, obviously, does not take into account deliberate slowdowns on plants which was happening as utilities began to run out of money, began to find lenders' terms harder, and began to become very unsure about sustained electric demand growth. Click to enlarge this photo.

The year 1974 saw a remarkable 13 nuclear plant operating licenses issued in just a ten month time frame, which added to the nation's grid roughly 10,000 MWe of nuclear generated electricity.  Clearly, the backlog of licensing had been removed and it was now again possible to plan for nuclear plants to be licensed (assuming all was in order) in a timely manner.  In fact, the AEC had this to say about its efforts - keeping in mind it was just about to be eliminated:

"The major share of nuclear regulatory effort is focused on the expanding use of nuclear energy to generate electric power.  A primary objective is to shorten the design-licensing-construction cycle for nuclear plants as much as possible to help attain the national goal of energy self-sufficiency, while maintaining the rigorous safety, health and environmental standards required for those facilities."

Having said all that, we find the following sharp turn:

"Under the impact of worsening financial conditions," WASH 1174-74 relates, "and some scaling down of projected future energy demand, utilities announced deferral of some 50 percent of all nuclear power projects during the latter half of the year."  This comprised 70 previously committed contracts for power reactor construction and also included the outright cancellation of nine nuclear units.  Further, setbacks and cancellations were also announced in 1974 for nuclear power plant projects that had been announced and approved by utility boards but for which no firm order commitments had been placed.

Although nuclear plants would continue to be ordered in patches during the years following, the flood was over.  In 1974 there were 221 nuclear units operating, being built, contracted for or announced.  This number would peak in 1975 at 236 units.  What actually played out, though, was that no nuclear unit ordered after 1973 would ever eventually be completed.  In fact, as an aside, only four nuclear units were announced in 1975, three in 1976, four in 1977 and just two during all of 1978, meaning that Three Mile Island did not "kill off the US nuclear build" - instead, 1974 did.* 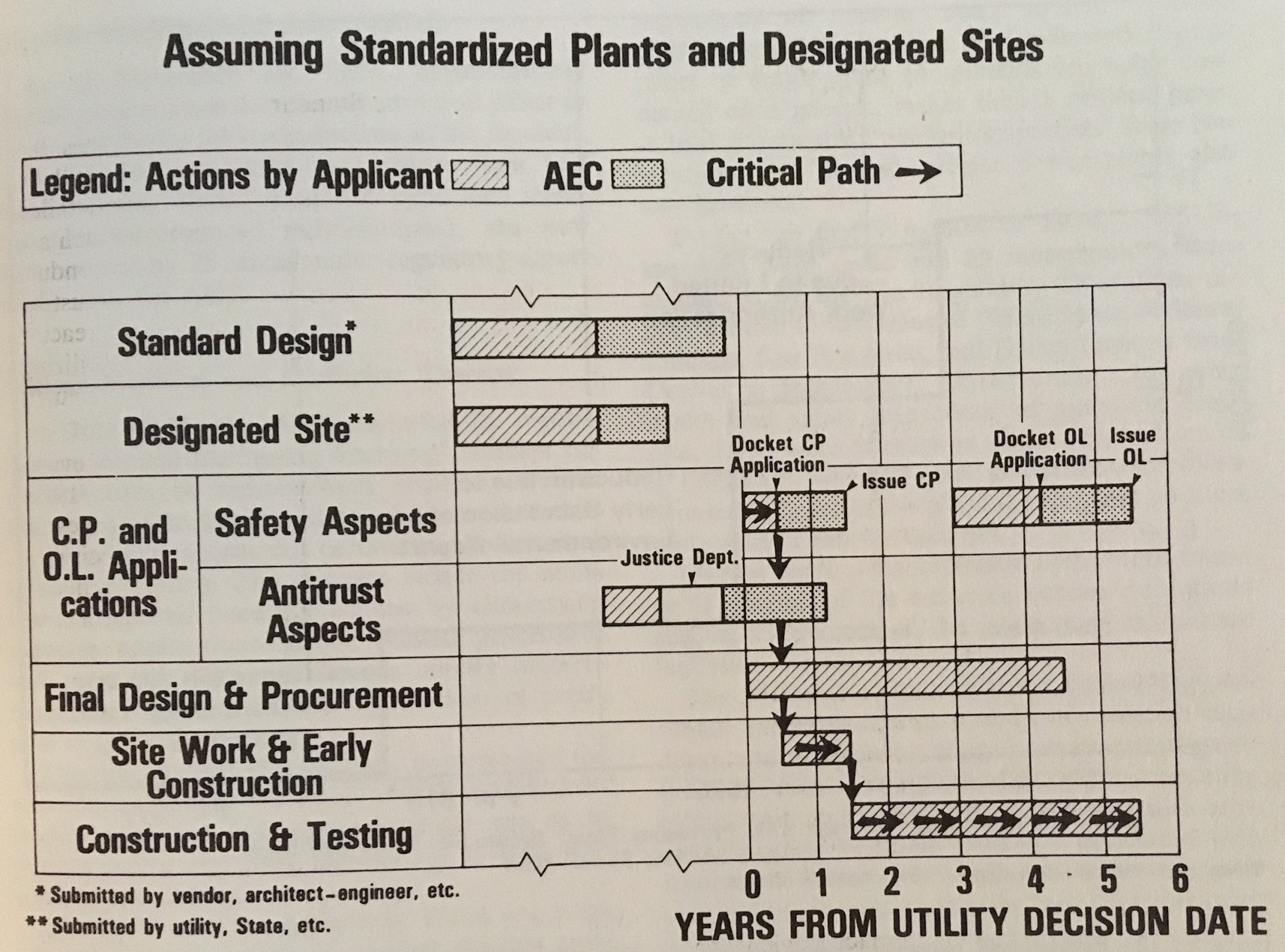 Although the eight year schedule shown previously was ambitious the AEC, at its end, hoped to do much more through standardized plant design (not just the reactor, folks!) and through the use of preselected screened sites. Note the less-than-six-year schedule here, and also note the critical path. From WASH 1174-74.

THE RESULT?  NOT QUITE YET.

We are through with our review of the remarkable WASH 1174 series of documents, but not through just yet with our study; a couple of volumes remain to be seen before we finish this look back at the 60's and 70's.  However, it's appropriate given today's environment (and environmental concerns!) to finish this installment with a quote from WASH 1174-74 that rings through the halls of time clearly right down to today, if one thinks about decarbonization instead of just energy independence:

"A paramount effect of power plant construction delay lies in the area of the nation's future energy self-sufficiency.  One of the means most often advocated for achieving independence from foreign oil supplies is large scale switching from oil to electricity for such applications as heating and transportation.  Increased electrification of the economy will be impossible if generating units are not placed in operation on a timely basis."

Coming soon:  A look at how the anti-nuclear movement started, and a look at nuclear plant cost escalation and schedule delay from testimony to the US Congress.  Click here to see the previous installment of this series and access all previous installments.

*Data from "Historical Profile of US Nuclear Power Development," Atomic Industrial Forum, 1985.  Opinion from the author.