On April 25, 1986, early in the morning, operators at the Chernobyl nuclear power plant near Pripyat, Ukraine, began a test of their backup power supply during a planned outage of Unit 4.  The first step of the test was to reduce the power in the reactors to about 20 percent power. By 2:00 pm, power had been reduced to 50 percent, and grid operators ordered the reactor to hold at a steady power to meet demand. At 11:10 pm, the power reduction resumed and, by 12:05 am on April 26, the reactor was at an appropriate power to conduct the test. At 12:28 am, the power dropped to one percent, far too low to conduct the intended test. Rather than abandon the test, operators decided to bring the reactor back up to power, and after about 45 minutes, power was stabilized near 6 percent, and emergency shutoff signals were disabled, in violation of operating procedure. Finally, at 1:23 am on April 26, 1986, the test began. Due to conditions beyond the test design, power began to rise rapidly, and control rods had been removed too far to compensate for unanticipated conditions, and by the time rods could be reinserted, the power had already increased to an estimated 100 times normal operating levels, leading to rapid boiling and a sudden steam explosion (not a nuclear explosion).

It's well worth noting that only the RBMK reactors designed in the Soviet Union could undergo this exact progression of events and lead to the rapid power increase that ultimately blew the roof off the reactor building. And those reactors - and their operating procedures - have since been modified to ensure nothing like the Chernobyl accident ever happens again.

A key feature of most nuclear power plant designs is the containment dome, which (as its name would suggest) contains radioactive materials in the event that the reactor system fails to contain it, and Soviet RBMK reactors lacked containment.

Following the events of April 26, 1986, radioactive material continued to be released for ten days. The largest single release of radioactive material took place on the day of the accident, as the graphite used in the reactor burned. Within three months of the accident, 28 first responders died of radiation-induced injuries, prompting the evacuation of 115,000 people from the nearby areas. In the following years, an additional 220,000 people were evacuated. An addition 19 emergency responders have died since 1987, but these deaths are not all linked to radiation impacts.  Since the accident, study of the health impact on those affected has been a major scientific endeavor, including decades of study on the long-term impact of exposure to ionizing radiation. Between 1986 and 2005, over 6,000 cases of thyroid cancer had been diagnosed in those affected by the accident, but neither these cases, nor any cancer deaths, have been attributed to the accident. The public dose from the incident was only a few times higher than the annual background in the area, according to the United Nations Scientific Committee on the Effects of Atomic Radiation.

Today, dose levels in the area around the plant have largely returned to safe levels. Some areas still have extraordinarily high dose rates, but today the habitable spots are far larger than the contaminated areas. The damaged reactor is now contained by the largest moveable structure humanity has ever created. 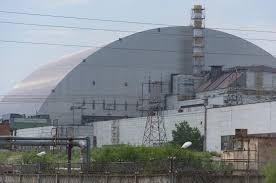 The Sarcophagus is over 800 feet wide, 355 feet high, and 492 feet long with a weight of almost 80,000 pounds. Every year, scientists and tourists visit the Chernobyl exclusion zone, whether to study the impact of radiation on the area or to see the site of one of the most well-known accidents in history.

Robby Kile is a graduate student in Nuclear Engineering at the University of Tennessee Knoxville where he studies reactor and fuel safety. Robby also enjoys advocating for nuclear science and technology online, in the classroom, and in public