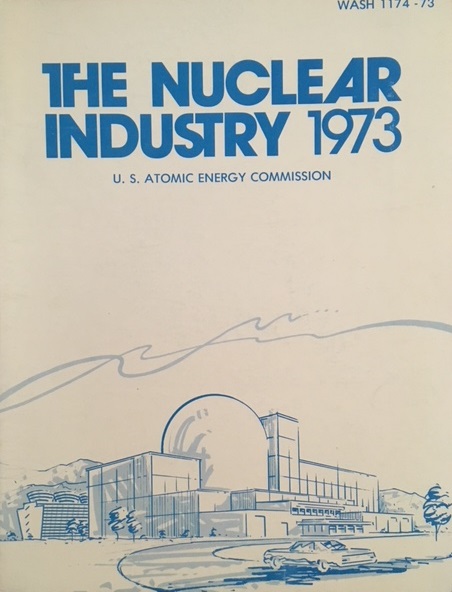 "The Nuclear Industry 1973," AEC publication WASH 1174-73, features the Clinch River Breeder Reactor project on its cover. At this time work was still seriously underway to shift the US nuclear fuel cycle to a closed or hybridized cycle instead of a "burn and store" open ended cycle - a goal that would never of course be realized.

The Atomic Energy Commission did not publish its standard annual report on the nuclear industry for the year 1972, but after broad request and clear demand did resume publication for two further years before finally cancelling it permanently.  It is of interest to note the second paragraph of the Summary's opening:

"As of December 31, 1973, there were 199 nuclear power plants operable, under construction, or contracted for in the United States."

This was in spite of the fact that there had been a 17 month halt in what the AEC referred to as "major licensing actions", ending in May 1972, as a result of litigation and negotiation following the Calvert Cliffs decision which was found to be legally binding to all nuclear plants not yet completed.  The seriousness of this regulatory nightmare is summed up on page 90 of the present subject, WASH 1174-73:

A principal factor in producing this logjam in licensing decisions was the carrying out of new environmental protection responsibilities placed on the AEC by the National Environmental Policy Act (NEPA) as interpreted by the Calvert Cliffs court decision of July 23, 1971.  This involves the direct responsibility to evaluate the total environmental impact of nuclear plants and to assess this impact in relation to the available alternatives and the need for electric power.  The retroactive nature of the Calvert Cliffs decision, bringing within its scope many plants on which licensing actions had already been taken, created an instant backlog of extensive environmental reviews that had to be done.  Thus, at the beginning of last year (1972), the Regulatory organization was faced with 60 reactor environmental projects - some for multi-unit applications - each involving the preparation of a draft environmental statement, circulation for comments, and preparation of a final detailed statement as required by NEPA."

The AEC and architect-engineer firms had originally stated that the time to perform the required environmental impact work would add two years onto the front end of any nuclear plant project, but the AEC stated in WASH 1174-73 that "the time required for an environmental review until issuance of the final detailed environmental statements had been reduced to less than 10 months on average for construction permit applicants."  Still, there was a considerable amount of 'dead time' without actual site work or component fabrication at the start of an average nuclear plant project as shown below in a graphic from WASH 1174-73, "The Nuclear Industry 1973." 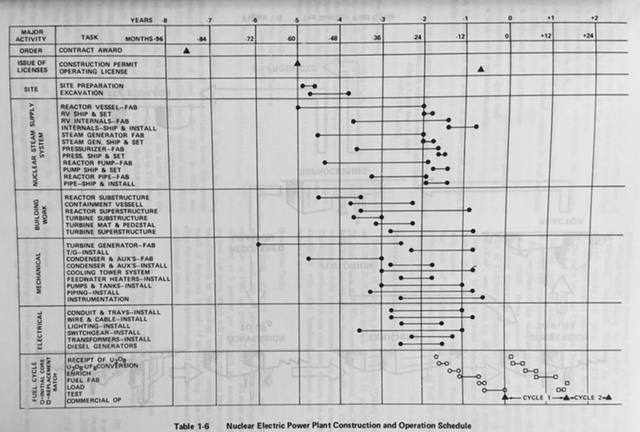 1973 Nuclear Plant Construction Schedule, Generic, US AEC; WASH 1174-73. (The author apologizes for the inability to scan this page, since the book will not lay flat on a scanner.)

Obviously, then, a considerable delay in all nuclear plants ordered or under construction was imposed by the externality of the Calvert Cliffs court case - an eventuality quite outside the control of those involved in building the plants, but one which isn't often cited by today's pundits who quote the lengthening construction times of nuclear plants in the 1970's.

In the arena of capital costs, the AEC had this to say when reviewing the year 1973:

"Capital costs for all electric power plants have risen rapidly over the past few years.  The increases in nuclear power plant costs are attributable to:  Changes in regulatory procedures; delays in the licensing process; late delivery of equipment; unanticipated cost escalation due to schedule delays; scarcity of skilled labor; declining productivity of field labor; continuing inflation in the costs of equipment, materials, and wages; and changes in scope of projects to meet additional requirements for environmental, safety, and other newly established standards.  Many of the trends that have caused the rise in construction for nuclear plants have had similar effects on alternative methods of power generation."

It's important here to point out that, according to the AEC, in 1973 it could be estimated that the construction timeline on average for a nuclear plant was 7.5 years while that for a comparable coal or oil fired unit in capacity was about 6 years.  The extended time period of nuclear construction exposed nuclear plant projects to a higher likelihood of any of the above-mentioned drivers of escalating cost having a more pronounced effect.  Simply put, the only way to level the playing field, as it were, was to bring nuclear plant construction time down to what the equivalent fossil plants were experiencing.

Although today's nuclear industry and academia are assured of the values of standardization, that principle was not altogether clear at the opening of the 1970's when utilities still had a multitude of vendors and technologies from which to select.  Standardization, and with it the required freezing of design, meant that some of the vendors whose business was centered on constant innovation and change in order to beat Westinghouse and General Electric felt that they were being forced to give up an essential advantage.  (In particular, if one peruses the news of these years it will be found that Combustion Engineering, who felt that it could "out-engineer" Westinghouse at every turn, was most vehemently against freezing of designs.)

However important competitive advantage might have been, the exposure to nuclear plant projects of two to four extra years' worth of economic uncertainty and inflation as compared to fossil plants dictated that something be done; further, the regulatory process was by this time seen as arduous at best and possibly wholly detrimental.  Thus, efforts were made inside the AEC to streamline regulatory process and encourage the vendors (and, architect-engineers) to standardize designs; these came to fruition in 1973.  To wit:

"In May 1972 the AEC issued a policy statement strongly endorsing the concept of standardization, mentioning its benefit in shortening lead time, but emphasizing even more the greater concentration it would permit on assurance of safety.

In March 1973, following a series of meetings with industry groups and others, the AEC announced three standardization options which it was prepared to implement, and also restricted power levels to about 1300 MWe.  There has been significant industry response under all three options."

The three stated options were, briefly, as follows:

•Reference System:  A standard NSSS or even plant design is submitted to the AEC for full review.  Then, according to WASH 1174-73, "Utilities ordering plants of an approved design can then reference it and concern themselves in detail only with site-related and balance-of-plant matters."  This would eventually become the dominant principle of course and led to today's Part 52 process.

•Duplicate Plants:  A single AEC review to be made for identical plants which would be built in a condensed time frame whether at one or multiple sites. The AEC noted that "late in the year there were indications of three applications to be filed under this option, involving some 12 nuclear units."

•License to Manufacture:  This option involved reactors "of a standard design" being manufactured at one location and then shipped to site.  While such designs as the floating Westinghouse plant were surely the trigger for this option it would also theoretically apply to today's factory-built SMR modules.

The effects of these standardization options on the construction times for nuclear plants were estimated and summarized by the AEC as shown in the illustration below.  Note that another principle, that of long-advanced and reviewed sites for nuclear plants, is also factored into the shortest time example. 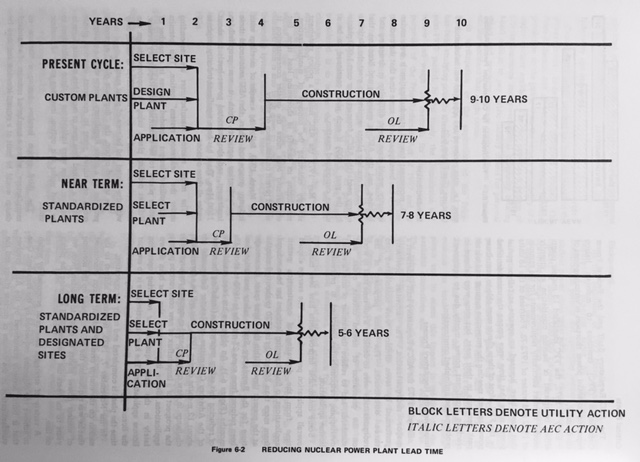 President Nixon asked the AEC to speed up licensing in November 1973, in order to prospectively shorten the overall construction time from the roughly ten years it was then taking to something like six years.  The efforts of AEC and the industry to standardize were already underway, and were accelerated to meet this new request - a request made not just in response to nuclear issues but in broader sense to the OPEC fuel crisis and the perceived coming shortage of oil.

In our next installment we'll move to WASH 1174-74 and attempt to find out the industry's ability to respond to these government incentives.